Piper Harron, a temporary assistant math professor at the University of Hawaii at Manoa, made these remarks and others on Facebook in May and June 2017.

“I need to take a long break from disagreeing with white people,” Harron wrote in May. “Their Have You Considereds have worn me down and I’m showing signs of weakness. If you wanna know why I don’t trust white people, it’s because of what that trust costs me.”

“Cis white het people need to lose more,” she commented the next day. “Cis het white people don’t know how to not be in control. They want to even control their dismantling of privilege.” 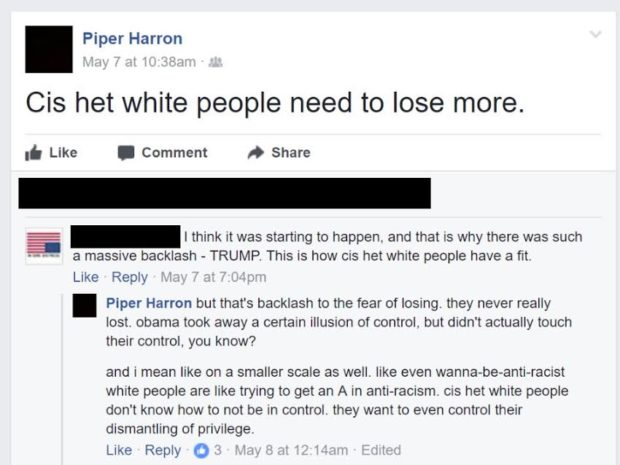 “As long as police are trained to murder, they will never be convicted,” said Harron in another June Facebook post.

“I shouldn’t have to argue at all let alone nicely against these ideas,” said Harron. “These are ‘ideas’ I shouldn’t even come across. That these ‘ideas’ are everywhere is violence. Asking me to treat them as innocent is violence.”

The math professor previously said, “If you are a cis white man (meaning you identify as male and you were assigned male at birth) you almost certainly should resign from your position of power” in a May essay. (RELATED: Prof To White Male Employees: ‘Please Quit’)

“The opinions of individual faculty members ​exercising their personal free speech rights do not represent the positions of the University of Hawaii,” said Dan Meisenzahl, spokesman for the university, in an email to TheDCNF. “Furthermore, the University of Hawaii prohibits discrimination against students and employees based on gender, ethnicity and/or religion, which is also stated plainly in our policies. Any report of discrimination will be investigated and addressed in accordance with our policies and procedures.”

Meisenzahl also directed TheDCNF to a message sent from University of Hawaii president David Lassner to the college community in which the president expressed similar sentiments.

TheDCNF reached out to Harron for comment, but received none in time for publication.