Freelance journalist David Leavitt is once again in the limelight for drawing negative attention to a fast food worker at McDonald’s. Leveraging his social media following of 60,000, Leavitt expressed entitlement when he attempted to get a refill on his drink after purchasing his order through the drive-thru.

The former CBS Local and AXS writer became the subject of news headlines earlier this May when his ill-timed “jokes” about dead children at the Ariana Grande concert in Manchester, England completely misfired. Outlets that the journalist worked with quickly distanced themselves from Leavitt after he doubled down on the jokes.

Tweeting at McDonald’s on Thursday, Leavitt wrote: “Your employee [name redacted] is refusing to refill my drink at McDonald’s” alongside a picture of the middle-aged woman.

When no one at McDonald’s responded to him, the freelance journalist acted as if the employee’s actions would have a dent on one of the world’s most popular fast-food businesses, which operates as a franchise.

“I will not be buying anything from @McDonalds again, that’s for certain,” he wrote. “Refusing to refill a cup just cost you thousands of dollars. Apparently @McDonalds will only refill cups inside and not orders from drive through. I never have had a problem like this before.” 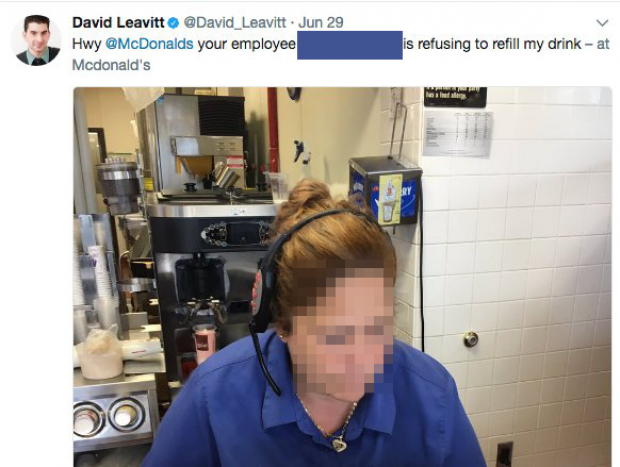 McDonald’s policy for refills usually only applies to dine-in customers, and those who leave the premises—including drive-throughs—rarely allow for it. As one contributor to Seventeen magazine wrote, “We can only do refills in your restaurant. Why? For the same reason we can’t take your garbage. I don’t know what you did to that cup after I gave it to you.”