A Democratic state lawmaker in Maine appears to have made a death threat against President Trump.

“Trump is a half term president, at most, especially if I ever get within 10 feet of that pussy,” Rep. Scott Hamann wrote in a lengthy Facebook tirade on Tuesday.

Hamann, who represents a district in South Portland and also works as project manager for a food bank, appears to have been responding to another Facebook user who expressed support for Trump.

Hamann accused Trump of being “anti-American,” and an “admitted rapist” who was “installed by the Russians.” 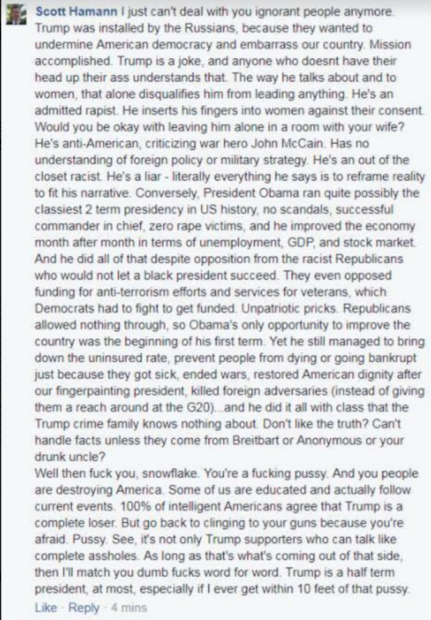 Hammon, who is in his third term in the state House and serves on the Health and Human Services Committee and a marijuana legalization committee, went on to berate Trump supporters, who he said receive their news only from outlets like Breitbart News.

“Don’t like the truth?” he asked. “Well then fuck you, snowflake. You’re a fucking pussy. And you people are destroying America.”

He continued: “100% of intelligence Americans agree that Trump is a complete loser. But go back to clinging to your guns because you’re afraid. Pussy.”

The chair of the Maine Republican Party responded to the post by calling on Maine’s House speaker to “do something” about Hammon’s remarks.

“Words cannot even begin to describe the level of revulsion I feel after reading Representative Scott Hamann’s recent tirade that has come to light,” Demi Kouzounas said in a statement.

“Perhaps the most alarming aspect of this tirade is an implied death threat against our President when Rep. Hamann states, ‘As long as that’s what’s coming out of that side, then I’ll match you dumb f**ks word for word. Trump is a half term President, at most, especially if I ever get within 10 feet of that p**sy,” she said.

She called on Maine House speaker Sara Gideon to “do something” about Hannon’s remarks, which she called “unhinged and dangerous.”

Hammon did not respond to phone and email requests for comment.

A phone call placed to the food bank where he works, Good Shepherd Food Bank, was not answered. But the group commented on the matter on Facebook.

“The views and opinions expressed by this employee are his own, and in no way reflect the views of Good Shepherd Food Bank. Our only goal is helping to end hunger in Maine, and we have addressed this with the employee,” reads a post on the organization’s Facebook page.