Vermont Sen. Bernie Sanders claimed Monday that President Trump bears “some responsibility” for the violence in Charlottesville this weekend.

Sanders indicated in an interview with reporters that Trump bears responsibility for the violence because he previously has not condemned white nationalists as strongly as Sanders would have liked. Sanders also posted — and then immediately deleted — a pair of tweets blaming Trump both for Charlottesville and for white supremacy generally. (RELATED: Man Who Opened Fire On GOP Lawmakers Volunteered On Bernie Sanders’ Campaign)

“How much, if any responsibility do you think that the Trump administration has for conjuring that behavior?” a reporter asked Sanders about this weekend’s violence.

“Look, I think it is — when you have a president who doesn’t have the guts to say what the vast majority of the people understand to be true, that white supremacy and neo-Nazism have got to be condemned, he can’t even do that!” Sanders claimed. “The message he is sending out to racists and neo-Nazis all over the country is, ‘It’s OK.’ In fact, you heard some language to that. ‘The president hasn’t condemned us. Why don’t we do more rallies? Why don’t we spread the word of white supremacy and racism and neo-Nazism?'” (RELATED: Portland Killer Is An Anti-Circumcision, Bernie Sanders Supporter)

“So do I think the president bears some responsibility for that?” Sanders asked, returning to the original question. “Absolutely, yes.”

Sanders’ Twitter account first posted video of Sanders’ answer with the caption: “Do I think the president bares [sic] some responsibility for what happened Charlottesville? Absolutely, yes.” That tweet was immediately deleted.

A subsequent Sanders tweet blamed Trump for “conjuring the behavior of white supremacists in this country.” That tweet, too, was immediately deleted. 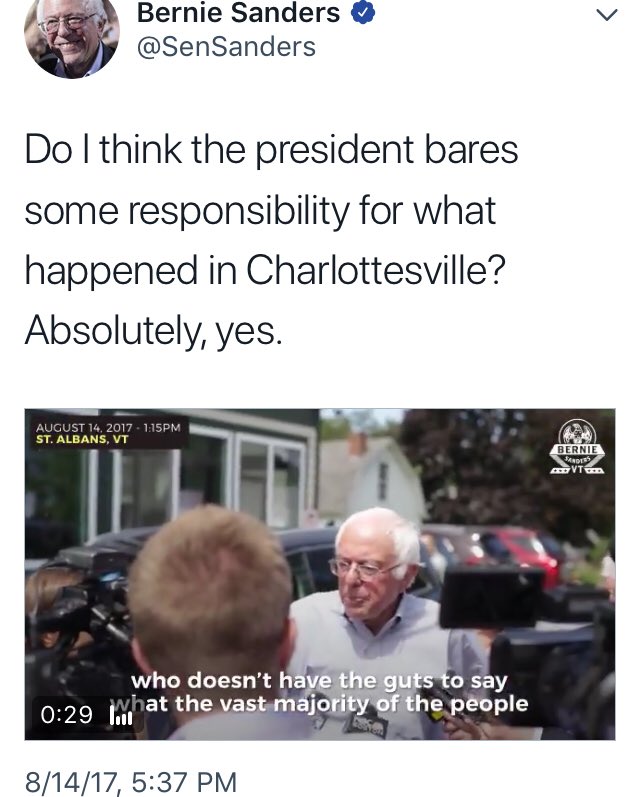 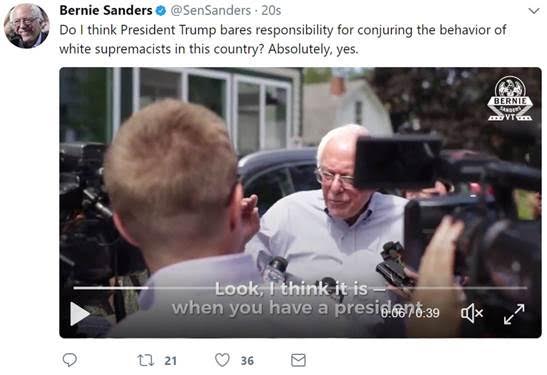 A third tweet, which has not been deleted and remains on Twitter, is captioned: “The message President Trump sent out to racists and Neo-Nazis all over the country this past weekend is this is okay.”

The message President Trump sent out to racists and Neo-Nazis all over the country this past weekend is this is okay. pic.twitter.com/k7o161yzuU

Trump unequivocally condemned racists and white supremacists in a statement on Monday. “Racism is evil and those who cause violence in its name are criminals and thugs, including the KKK, neo-Nazis, white supremacists and other hate groups that are repugnant to everything we hold dear as Americans,” Trump said.