Students at a fancypants private college in Southern California have announced they feel “unsafe” after a fellow student posted a photo of herself with Vice President Mike Pence on Facebook because, they say, Pence “has shown himself so willing to commit institutional violence.”

McKenzie Deutsch is the student who posted the Facebook photo of herself with Pence. She is a student at Scripps College, the all-female branch of the Claremont Consortium.

Deutsch, a rising junior, was an intern this summer in the office of U.S. Representative Cathy McMorris Rodgers, a Republican from the state of Washington.

During the course of the internship, Deutsch had the opportunity to meet Pence and to stand in a photo with the vice president flanking her on one side and Rodgers on the other side.

Deutsch posted the photograph on her Facebook page with the caption: “The places you’ll go, the things you’ll see, the people you’ll meet… What a day it was in DC!”

In response to the Facebook posting, some of Deutsch’s acquaintances at Scripps — and at other schools in the five-school Claremont Consortium — shamed and ridiculed Deutsch.

A few people even added Deutsch as Facebook friends precisely so they could send her nasty messages, she said.

“I don’t know if you understand that Pence want me and the people I love to be erased by any means possible. I don’t know how to express to you how it feels to see a fellow Scrippsie in this photo with someone who has shown himself so willing to commit institutional violence,” one angry student wrote under Deutsch’s photo with Pence.

“Posing next to someone who is a direct threat to LGBT+ groups and other marginalized communities and posting this photo with a pleasant caption is not a politically neutral act,” the student declared. “It shows you as a person who smiles with our oppressors for the sake of a photo op.”

Another student said the photo of Pence — snapped 2,636 miles away in Washington, D.C. — made her feel “unsafe.”

“To post this photo with pride is to make LGBTQ+ folks feel unsafe, as Pence has incredibly violent, homophobic views,” the student wrote, adding that she was “shocked at the continued inability to listen to marginalized people about the impact of this picture on us.”

A third student was downright hostile.

“Hmmmmm how many lgbtq folks do you need to help send to conversion therapy in exchange for reproductive rights from Pence?” the student asked.

Then she added: “Bitch.” 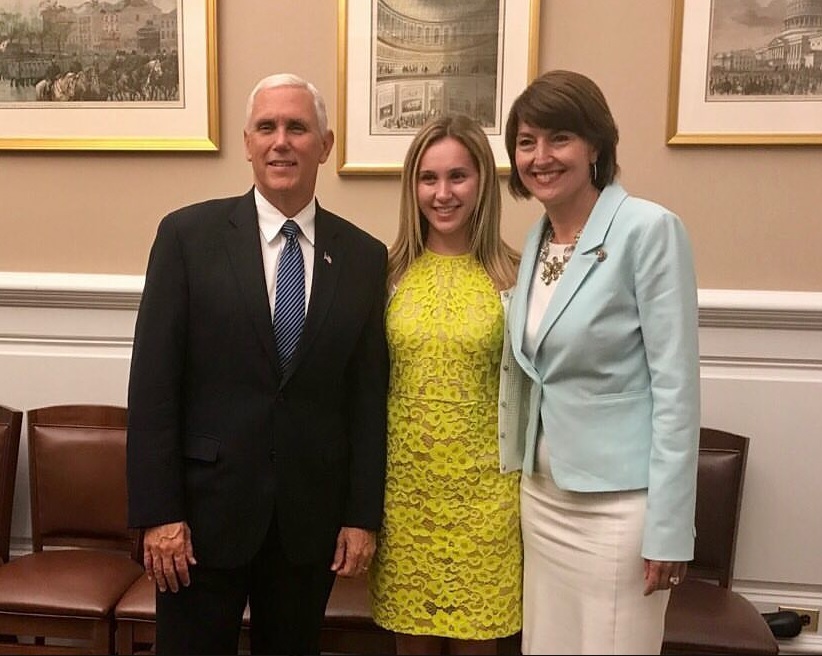 The Claremont Independent, a student newspaper, published an essay by Deutsch about the criticism she received after posting the photo with Pence.

“It is as if every student must follow an understood uniform code of conduct and speech — as if I must share the liberal politics of my peers in order to be treated with respect or considered a decent person,” Deutsch wrote. “Their lecturing about diversity apparently does not extend to diversity of thought.”

The colleges of the Claremont Consortium are hotbeds of radical political correctness and bizarre leftist craziness.

In 2016, a group of white students at Pomona College established a white-people-bashing group with the interestingly long title: “We’ve Got Work To Do: White People for Deconstructing Whiteness.” An ad for the group declared that people with pale, cream-colored skin “are all not only complicit in, but actively perpetuating white supremacy.” Incredibly, the group was only allowing “white people who believe white supremacy exists” to join. (RELATED: White Students At Fancypants College Start SEGREGATED Club Dedicated To Bashing White People)

Also in 2016, a group of students at Scripps vented frustration because the school had planned to host Madeleine Albright as its commencement speaker.

“With Madeline [sic] Albright being our commencement speaker (and a war criminal and a white feminist) I know some of our professors are refusing to be on stage,” the student wrote, according to the Claremont Independent.