As first responders continue to conduct rescues throughout the Houston area amidst catastrophic flooding from Hurricane Harvey, they may have to worry about another potential variable getting thrown into the mix — 350 alligators that could escape from a flooded sanctuary near Houston.

Gary Saurage owns a 15-acre alligator sanctuary located several miles east of Houston, and he has warned that although his facility uses “certified, high fences,” they may not be high enough to stop the alligators from escaping as water levels are near the top of the fence, KFDM 6 Southeast Texas reported.

“We’re less than a foot from (water) going over the fences,” Saurage told KFDM Monday. “We’ve worked around the clock and I don’t know what else to do. We’re truly tired. Everybody’s at the end of it, man. We don’t know what to do.” 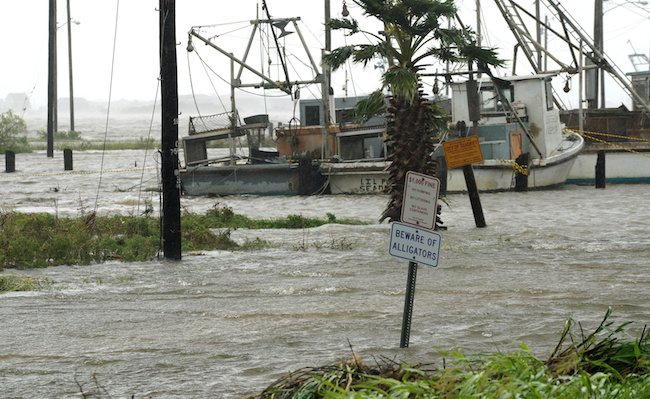 A sign warning against alligators is seen in a flooded street during Hurricane Harvey in Seadrift, Texas, August 26, 2017. REUTERS/Rick Wilking

Numerous alligators have already been spotted throughout the Houston area as flood waters have allowed to travel into areas where they are normally not present.

The Fort Bend County Sheriff’s Office advised that people leave the alligators alone until the water begins to recede and they return to their normal areas of inhabitation.

Gators and flooding advice via @txgatorsquad: Expect them to be displaced. Simply looking for higher ground. Leave alone until water recedes pic.twitter.com/nN1B5jvMyV

On average, a typical American alligator can grow to be 8 to 14 feet long depending on sex and can weigh 1,000 pounds, according to the Smithsonian’s National Zoo & Conservation Biology Institute.

Alligators are very common from Texas all the way up the east coast to North Carolina with states like Florida being home to over 1 million alligators.

Despite the dense populations of alligators throughout the southeast, attacks on humans are surprisingly rare with only an estimated .06 attacks per year per 100,000 people, the BBC reported.

A 2010 report detailed that in an 81-year span from 1928 to 2009 there were only 24 reported deaths from alligators in the U.S. with most fatalities occurring in Florida.