Politico tweeted then deleted a cartoon Wednesday that mocks the victims of Hurricane Harvey with harsh stereotypical depictions of Christian conservatives.

The cartoon shows one man in a cowboy hat and boots and a confederate flag t-shirt being airlifted out of a flood. The man’s roof has a Texas flag with the word “secede” on it and there is a Gadsden flag floating in the waters nearby.

The man has a speech bubble that refers to rescuers as “Angels! Sent by God!” while one of the rescuers responds, “Er, actually Coast Guard, sent by the government.”

Check out the latest from @wuerkerhttps://t.co/WAz09COZDDpic.twitter.com/iWUlhQD6NN

Here is a screenshot of the cartoon, which can still be viewed on their website. 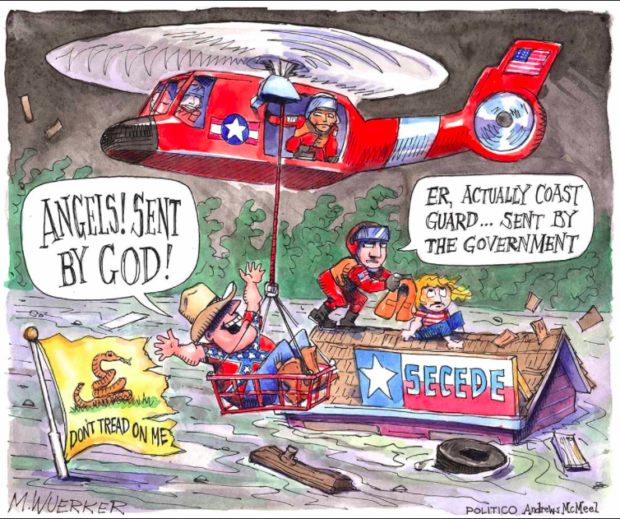 The cartoon wasn’t posted on Politico’s Twitter account for very long before people began slamming them for politicizing the Hurricane Harvey tragedy and stereotyping the victims.

On behalf of Texas, fuck you

Houston takes in more international refugees than any city in the country. This characterization as backwards yokels is offensive.

This is the worst thing they have ever done.

Disgusting to characterize people who are hurting in some political way.

On behalf of the USCG who’s husband & crews are saving lives in this storm. You don’t represent us.

Hurricane Harvey is nothing compared to Hurricane Hate which has stalled over DC for months and is drowning us all in anti-Trump rhetoric.

People are suffering (even dying) and you publish this trash? Really?