If your mantra is “He stinks, but at least she lost,” then we are pals. And the New Yorker wants to feed our schadenfreude. They’re not letting go of the dream. They’re #StillWithHer.

This is the cover we would have published had Hillary Clinton defeated Donald Trump: https://t.co/Qc8hQUjefa pic.twitter.com/0bL2dcvaRz 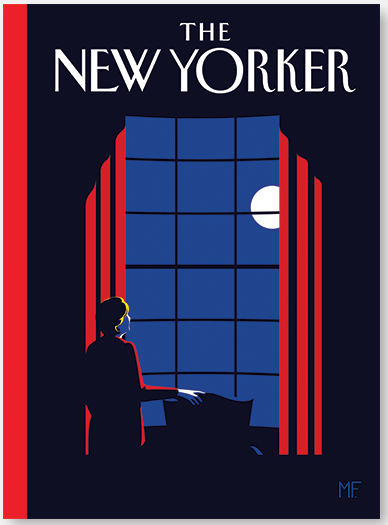 The painting is called “The First,” by Malika Favre. Which is still an appropriate title. Hillary Clinton wasn’t the first woman elected president, but that fact will be the first thing she thinks about when she wakes up, every day, for the rest of her life.

I don’t know what it is about Democrats, but they tend to do this sort of thing when they suffer a heartbreaking loss. In 2009, Newsweek actually published a piece of fiction called “If Gore Had Won,” which was an “oral history” of Al Gore’s two terms in office. It seems to have disappeared from the Internet, but here’s how io9 described it:

Essayist David Rakoff kicks off his alternate history of the decade with Gore’s narrow victory in Bush v. Gore, leaving Justice Anton Scalia fuming. Once Gore is sworn in, there’s an unpopular preemptive strike in Afghanistan before September 11th has a chance to happen, and Hurricane Katrina has a less disastrous outcome, but it’s not all smooth sailing for Gore. His credibility is undercut when he signs a quickly neutered Patriot Act, and then there’s the conflict with his own vice president, which starts on Inauguration Day…

I suppose they think alt-history will soothe their troubled souls. (As long as it doesn’t involve the Confederacy, of course.) Which is fine. They’re not hurting anybody but themselves by wallowing in nostalgia for something that never happened.

Even with Trump driving everybody crazy, this still isn’t the darkest timeline. Count your blessings, America.