Discussion of the state of the firearms industry began again with the release of the August NICS numbers. Allegations of a fading industry recur every month. Obama was the greatest gun salesman ever, Hillary Clinton almost was, and Trump may be the worst yet.

Few descriptions of the intersection between a Constitutional right, an industry, and policy are that simple or that shortsighted.

The immediate response is that there were more NICS background checks last month than in any August before and that the first eight months of 2017 would already qualify as the 7th busiest year in NICS history even without the busy holiday months. The long-term numbers tell a more interesting story, and one that hopefully does not need to be revisited every month for the remainder of the Trump Administration.

Look at the January-August trend since the inception of NICS: 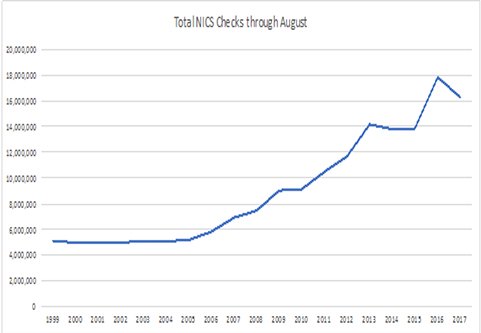 The long-term trend is clear…more so when you consider that 27 states now accept a valid firearm permit or license to purchase a firearm as a substitute for a NICS check. Legal purchases by permit or license holders in these states are not necessarily included in the NICS totals.  Though NICS checks are not a perfect indicator of firearms sales, the fact that permit holders in more than half the states can legally purchase a firearm without a NICS check does suggest that total sales are likely higher.

Looking at the annual records check by type shows that checks for permits, handguns, and long guns have all increased over time. Again, the long-term trend is clear. Keep in mind that we only have three-quarters of 2017 in the books: 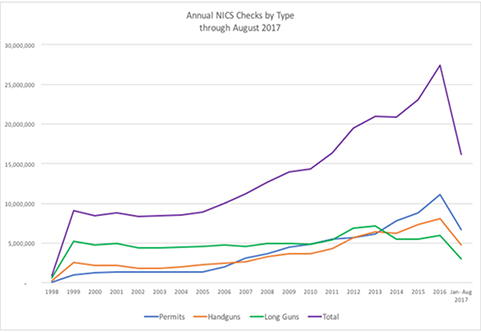 Checks for permits, handguns, and long guns all rose fairly steadily since the early 2000s.

The overlooked aspect of this story every month is that firearms are durable goods, especially with proper maintenance. Cars, lawn mowers, DVD players, and laptops all break down eventually. Firearms can last generations.

Nearly half of American households include at least one gun owner, compared to 39% in 2011. American manufacturers produced more than 9.3 million firearms in 2015, up from 3.9 million in 2007. There are more than 5.2 million National Firearms Act “firearms” registered, up from 2.85 million in December 2010.

The monthly NICS numbers may not always set a new record. They may sometimes set the record for a particular month, like last month did, or they may pale in comparison to the busiest month ever. Getting caught up in the month-to-month points doesn’t allow one to appreciate the big picture.