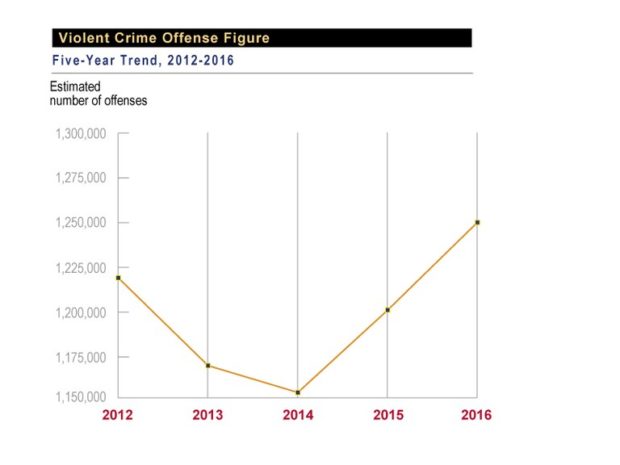 The FBI found that aggravated assaults counted for more than 64 percent of all violent crimes in 2016. Murders made up roughly 1.4 percent of violent crimes, with nearly 17,500 killed last year. The Bureau also noted that, while 2016 represents a four-year high in violent crime, it is still 12.3 percent lower than crime rates in 2007. (RELATED: Gun Prosecutions Up 23 Percent Following Crackdowns From Trump, Sessions)

The report “reaffirms that the worrying violent crime increase that began in 2015 after many years of decline was not an isolated incident,” the Department of Justice said in a statement to The Daily Caller News Foundation.

“For the sake of all Americans, we must confront and turn back the rising tide of violent crime. And we must do it together,” Sessions said. “The Department of Justice is committed to working with our state, local, and tribal partners across the country to deter violent crime, dismantle criminal organizations and gangs, stop the scourge of drug trafficking, and send a strong message to criminals that we will not surrender our communities to lawlessness and violence.”