The “Monday Night Football” ratings for Week 6 were the lowest of the season as the Tennessee Titans beat the Indianapolis Colts 36-22 in Nashville, Tennessee.

According to Deadline, early numbers show that ESPN came away with ratings that were 13 percent lower than last week’s game, when the Minnesota Vikings beat the Chicago Bears 20-17. (RELATED: ‘Monday Night Football’ Ratings Down) 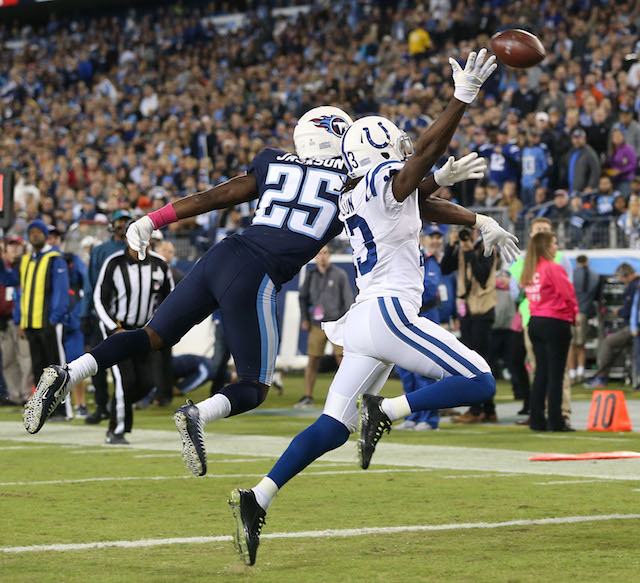 Adoree’ Jackson #25 of the Tennessee Titans breaks up a pass to T.Y. Hilton #13 of the Indianapolis Colts during the first half at Nissan Stadium on October 16, 2017 in Nashville, Tennessee. (Photo by Frederick Breedon/Getty Images)

Last week’s Monday night game was 17 percent lower than the week before, and final numbers came in at 3.7 in the key demographic of ages 18-49 and 10.3 million viewers.

In comparison, the Week 4 matchup between the Kansas City Chiefs and the Washington Redskins scored a 11.9 million viewers and a 4.3 rating in the key demographic.

The Week 6 game last night drew ratings that were 3 percent lower in metered market results than last year’s Week 6 game. In that game between the Arizona Cardinals and the New York Jets, the key demo numbers hit the season low with a 3.0 among ages 18-49 and 8.4 million viewers.