President Donald Trump landed in Japan Saturday for his first stop on his longest foreign trip yet.

Here are key moments from the trip.

Before Trump landed in Japan, it was reported by Japan Times that the president thought Japan should’ve shot down North Korean missiles that flew over the country earlier this year.

“Trump questioned Japan’s decision not to shoot down the missiles when he met or spoke by phone with leaders from Southeast Asian countries over recent months to discuss how to respond to the threats from North Korea, the sources said,” the Japan Times report said. “The U.S. president said he could not understand why a country of samurai warriors did not shoot down the missiles, the sources said.”

“I think it’s expected we’ll meet with Putin, yeah,” Trump told reporters aboard Air Force One. “We want Putin’s help on North Korea, and we’ll be meeting with a lot of different leaders.”

Trump spoke to American troops at Yokota Air Base and told North Korean dictator Kim Jong Jun to not mess with America. 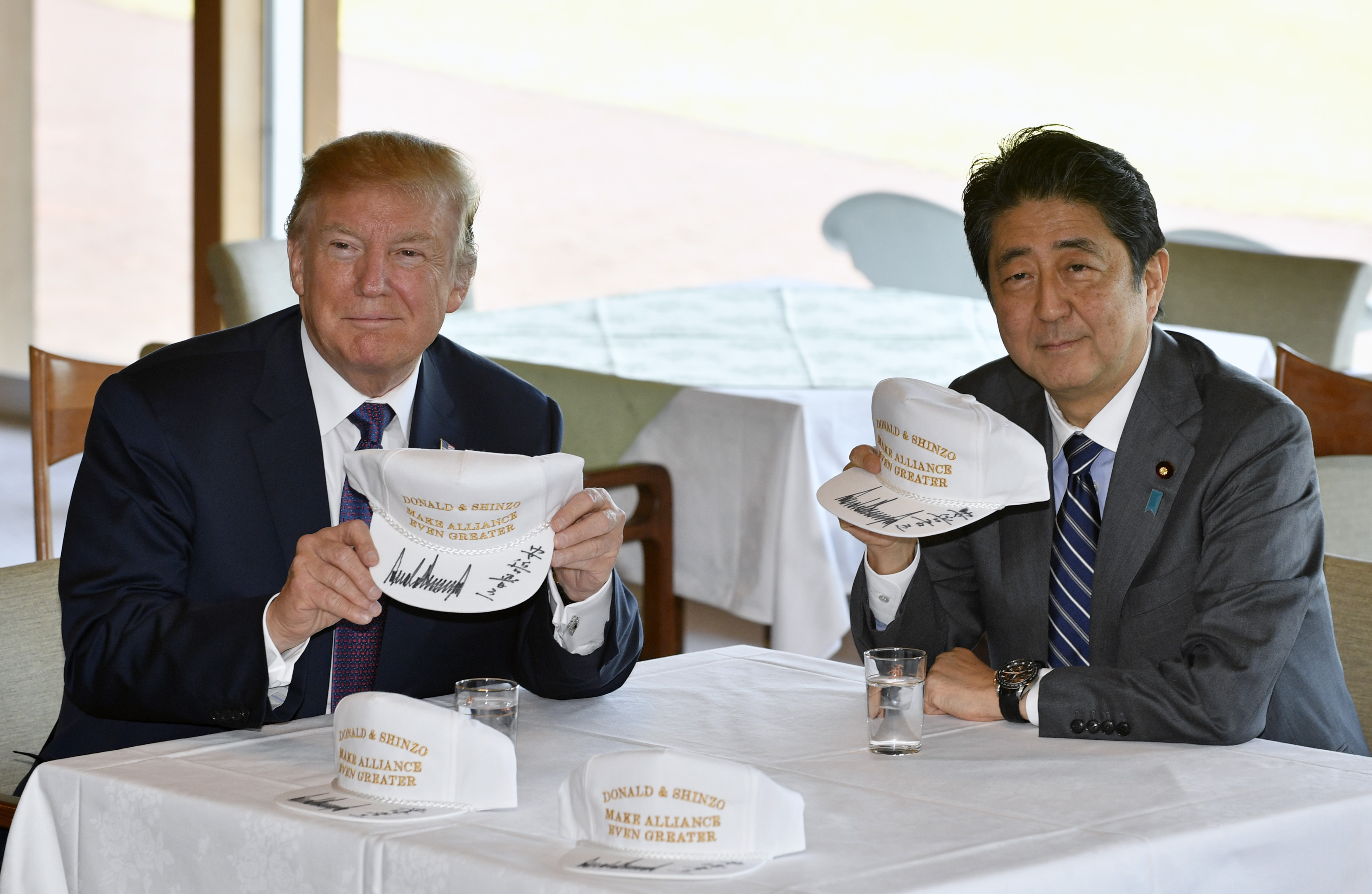 US President Donald Trump (L) and Japanese Prime Minister Shinzo Abe pose after they signed hats reading ‘Donald and Shinzo, Make Alliance Even Greater’ at the Kasumigaseki Country Club in Kawagoe, near Tokyo on November 5, 2017.
Trump touched down in Japan, kicking off the first leg of a high-stakes Asia tour set to be dominated by soaring tensions with nuclear-armed North Korea. FRANCK ROBICHON/AFP/Getty Images

Trump and Prime Minister Abe met at a country club and played golf and ate hamburgers. It was as if Trump never left home.

素晴らしい友人とのゴルフ。会話も弾みます。
A round of golf with a marvelous friend (President Donald J. Trump), full of spirited conversation. @realDonaldTrump pic.twitter.com/ZpMrWeWudW

The two later had dinner with their wives at a Japanese steakhouse.

​”​We’re in the midst of having very major discussions on ​many subjects, including North Korea and trade and we’re doing very well. Doing very well. Our relationship is really extraordinary. We like each other and our countries like each other,” Trump told reporters. “And I don’t think we’ve ever been closer to Japan than we are right now. It’s a great honor, it’s a great honor. We’ll have dinner tonight. I think we’ll insult everybody by continuing to talk about trade. But the time is a little bit limited and then tomorrow is a very busy day.”