Redditers were not fans of the answers Bill Nye “the science guy” gave in an AMA, grilling the former children’s show host for dodging questions and giving inaccurate answers.

Nye held the AMA on Wednesday to promote his upcoming documentary. Nye says his goal is to end “anti-scientific thinking,” but Reddit users were left less than satisfied with answers the science guy gave to their questions.

Right off the bat Nye got hit for saying 3 Kelvins was “toasty warm, referring to the temperature of space. One savvy commenter noted 3 Kelvins is about the same as -454 degrees Fahrenheit.”

In fairness, Nye may have been joking, but Reddit wasn’t having any of it.

Redditers also went after Nye for getting the facts wrong regarding a recent lawsuit filed against the National Academy of Science and various researchers for criticizing a paper written by Stanford University professor Mark Jacobson. Nye also gave some disagreeable answers about nuclear power. 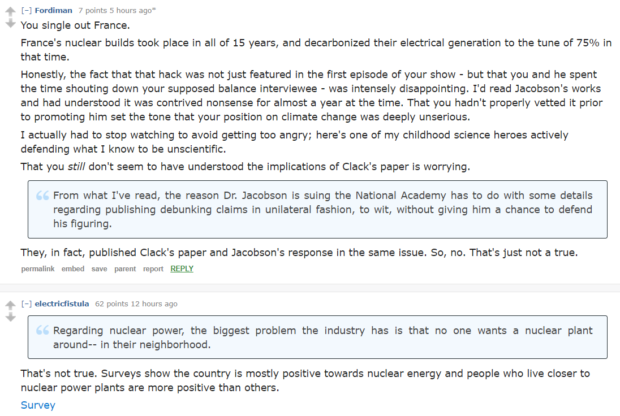 Jacobson filed suit against the Academy and authors of a study that debunked his own 2015 study claiming the U.S. could be powered with 100 percent green energy. The rebuttal found Jacobson relied on faulty modeling, so the Stanford professor is suing them for $10 million.

Redditers couldn’t resist going after Nye for saying science is “true whether you believe it or not.” Commenters quickly pointed to Nye’s less-than-scientific claim that gender is a spectrum, and not binary. 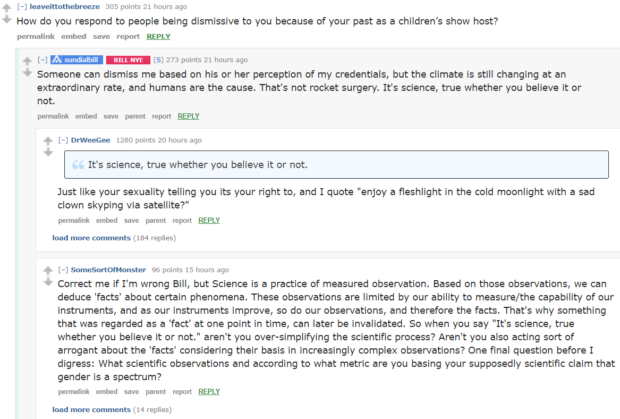 Curiously, Nye also told Reddit users that belief in the “deep state” was the most harmful science-based conspiracy theory out there.

The phrase “deep state” gained popularity among conservatives this year as a way to describe powerful, unaccountable and veiled government institutions, like the CIA. It’s not at all a science-based idea. 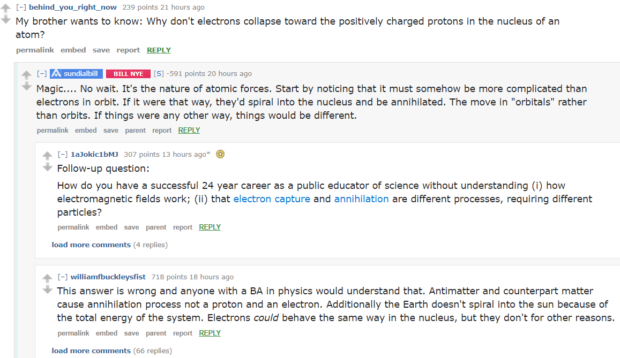 Nye also gave a weirdly obscure answer to a Redditer who asked which politicians the science guy believes he’s influenced the most.