The head of the U.S. Forest Service (USFS) is not the right person to lead an agency that recently acknowledged widespread sexual harassment, a retired employee said in a letter sent to Congress.

Following a November article from The Daily Caller detailing an internal sexual harassment review at the Forest Service, its chief, Tony Tooke, sent an email to all USFS employees, saying, “The Forest Service is fully committed and working very hard to achieve a safe, rewarding and resilient workplace for each employee.”

“Confronting all forms of harassment is a must for uplifting and empowering employees to meet our work environment goals,” Tooke wrote.

But questions are being raised if Tooke is the person to change the culture. Approximately 12 years ago, Tooke, who was married at the time and Deputy Forest Supervisor for the National Forests in Florida, carried on an affair for approximately two years with an entry-level employee, according to a retired Forest Service employee.

The retired USFS employee, who rose to region chief and worked in the same region as Tooke, asked not to be identified because the person still has family working at the USFS and worry they’ll be retaliated against.

A second former USFS employee told The Daily Caller that Tooke’s mistress told them directly about the affair at the time. 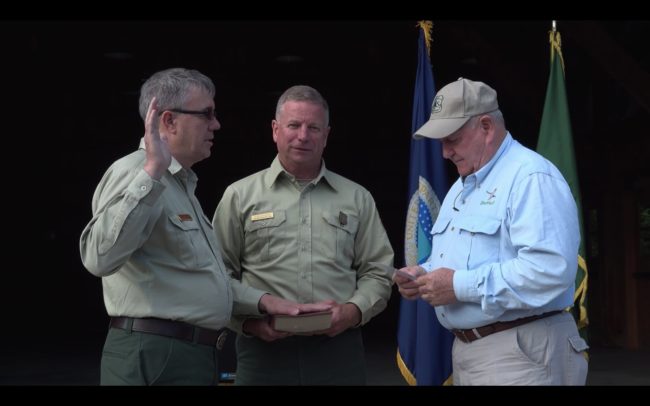 After Tooke was named USFS chief last summer, the former region chief sent a letter to Congress detailing her claims.

“Initiated prior to 2005, the sexual misconduct involved a two-year affair between Mr. Tooke, then Deputy Forest Supervisor in Florida and a student from the SCEP program, who was newly converted to a permanent position in Florida, where Mr. Tooke was assigned,” the retired employee wrote Aug. 31, 2017.

“Mr. Tooke occupied a position of power, as the Deputy and second in charge for the National Forests in Florida.”

“The young female employee was an employed on the National Forests in Florida. The employee’s direct supervisor was the Public Communications Staff Officer, who in turn was supervised by the Forest Supervisor and Deputy Forest Supervisor, Mr. Tooke, per the Chain of Command.”

“In my brief read of the ‘Justia’ website article for Defending Charges of Sexual Misconduct I found, ‘It is important to recognize that consent maybe a defense,'” the letter stated. “However, if sexual misconduct arises from a position of power, consent may not be a legal defense, the abuse of power is a crime, even if the subordinate appeared to consent.”

Tooke is also alleged to have pulled strings to get a plum promotion for his paramour.

The second former USFS employee also confirmed Tooke repeatedly lobbying for the woman to get this position.

Tooke also continued having contact with the woman after being told to stop and even threatened her if she revealed details of the affair, according to the letter.

“When the sexual misconduct was uncovered the Forest Supervisor Kearney directed Mr. Tooke to cease any contact with the female employee,” the letter stated. “Mr. Tooke not only contacted the female employee, he told her not to say anything more about their sexual relationship or her career ‘would go down.’ Distraught over this contact, the female employee shared this conversation with her supervisor, the Public Communications Staff Officer.”

Tooke went on to be promoted to a management position in the central office in Washington, D.C. before continuing to rise within the organization.

A U.S. Department of Agriculture spokesperson issued a statement denying the charges; the USFS is part of the USDA.

“Tony Tooke has a clean personnel record and there is nothing in his employment record reflecting complaints against him of this nature.”

“Under Secretary Perdue’s leadership, USDA has greatly improved investigation of claims of sexual harassment, which are taken very seriously. Prior to January 20, 2017, USDA averaged 236 days to process EEO complaints; well above the 180-day processing time required by law. By the end of fiscal year 2017, USDA reduced its average processing time to 177 days and continues to make improvements. Under Secretary Perdue, EEO administrative claims are being investigated in a more timely manner so that we can ensure an environment of mutual respect and fairness.”

“Likewise, harassment in any form has no place in the Forest Service. With Tony Tooke as Chief, the Forest Service opened the Harassment Reporting Center on November 6, 2017. This is the latest initiative to prevent harassment within the workforce by providing a dedicated resource for reporting all forms of harassment. The call center is staffed by contractors specifically trained to handle harassment issues, including sexual assault. All complaints are taken seriously and when we learn of allegations we take assertive measures, including initiating disciplinary actions when wrongdoing is confirmed.”

But when Georgia Republican Sen. Johnny Isakson reached out to the USFS, its lawyer said that the allegations were “properly addressed at the time.”

“We can confirm the issues … involving allegations from more than a decade ago were properly addressed at the time,” a USDA lawyer said in a letter to Isakson dated Oct. 20, 2017.

The two USFS sources said the only punishment Tooke faced was a verbal reprimand from a superior. A verbal admonishment would explain why his personnel record is “clean,” since such a rebuke would not wind up in his file.

The USDA did not clarify how the allegations were addressed at the time.