This is the sixth article in the American Cartel series about the billionaire Sackler family, Purdue Pharma and the opioid epidemic. Read the first, second, third, fourth and fifth.

NEW YORK — Drummer Deantoni Parks’ eyes widened in shock when he learned that a billionaire family with deep ties to the opioid epidemic bankrolled the performance he concluded minutes earlier.

Parks had just finished performing at the Dia Art Foundation in New York City, which received $20 million from the Sackler family in recent years. The Sacklers – who are intimately linked to the opioid epidemic’s start – amassed a $13 billion fortune primarily through painkiller sales.

Other visitors to New York’s famed museums provided TheDCNF with similar disgusted reactions to opioid money being used to fund the art world. The tourists wanted the museums to explain why they took the money and why the institutions still prominently display the Sackler name.

They were never given an answer.

Purdue Pharma – the Sacklers’ privately-owned drug manufacturer – is widely blamed for playing a major role in starting the opioid epidemic through its aggressive and deceptive marketing campaign to promote its darling painkiller, OxyContin. Purdue also funded propaganda that pressured physicians into prescribing opioids to treat chronic pain, despite their concerns of the drugs’ addictiveness.

The Sacklers’ company and three of its top executives ultimately admitted to lying to doctors about opioids’ addictiveness. Regardless, Purdue raked in around $35 billion from OxyContin sales between its 1995 release and 2015, Forbes reported. More than 200,000 Americans have died from prescription opioid overdoses between 1999 and 2016, according to the CDC.

Yet the Sacklers have mostly avoided legal trouble and are instead known for their international philanthropy. The Brooklyn Museum, the Guggenheim Museum and The Metropolitan Museum of Art, for example, have all taken large sums of money from the Sacklers and have wings bearing the family name. 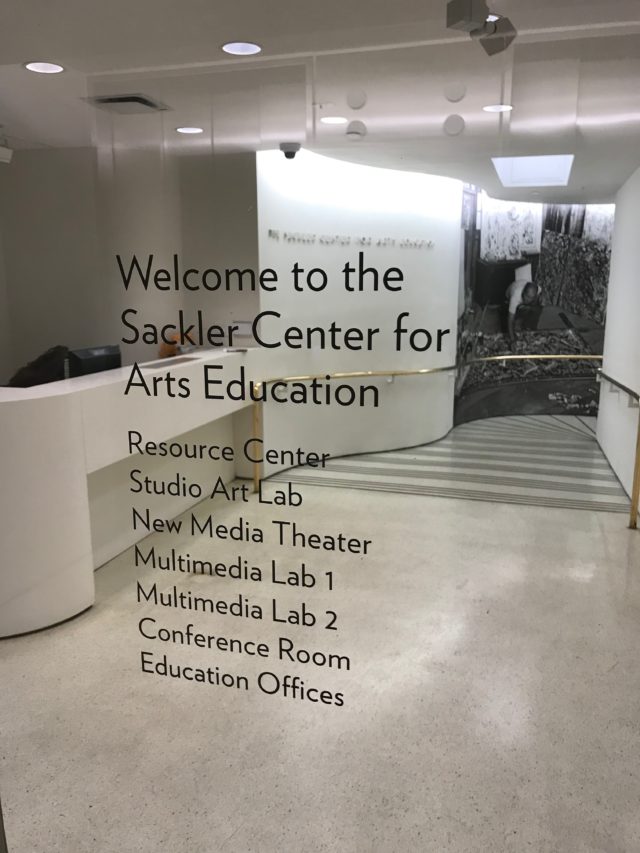 Entrance to the Sackler Center for Arts Education at the Guggenheim Museum in New York City. (DCNF/Ethan Barton)

While the museums have either ignored media requests or repeatedly and aggressively refused to comment on the Sacklers’ donations, Parks and other visitors were appalled at the art institutions’ willingness to accept what they viewed as controversial funding.

“A certain aspect” of Parks’ perception of Dia changed after being told about the art foundation’s opioid ties, he told TheDCNF. “It doesn’t feel good.”

He lamented that organizations are frequently corrupted in some way and that Dia’s opioid funding was just one example.

“I’d rather not be part of it to be honest,” Parks told TheDCNF. He said he prefers having ownership over his projects to avoid the types of financial conflicts he was now seeing at Dia.

In contrast, one of Dia’s associate curators, who did not provide her name, refused to comment on the art foundation’s ties to the opioid epidemic and walked away from a DCNF reporter trying to interview her. She also ejected another DCNF reporter after hearing his interview topic with Parks.

Similarly, Parks’ co-performer, Lucy Raven, refused an interview, even after being told that her performance was bankrolled with money tied to the opioid epidemic. She said she wanted to enjoy talking with the audience and refused to take a DCNF reporter’s business card.

Raven had shown Dia’s audience a screening of Hardcore, a short artsy film from 1969. She then displayed a series of flashing images on projectors as her response to the movie, while Parks played on a three-piece drum set and a small synthesizer.

Visitors of The Metropolitan Museum of Art and the Brooklyn Museum had reactions similar to Parks.

“Oh, it’s one of those deals,” Dale Hightower told TheDCNF. He rolled his eyes while emphasizing the word “those.” He was unsurprised that the museum was tied to questionable funding, but was clearly disillusioned about it.

“It’s no different than what’s going on in politics,” Hightower said. “Money talks.”

The Sacklers have donated nearly $200,000 to The Met in recent years, TheDCNF previously reported.

“Someone should ask [The Met] ‘are you going to continue to take the money?'” Hightower told TheDCNF as he stood next to the Temple of Dendur, which is housed in The Met’s Sackler Wing. “Do they research where the money comes from?” 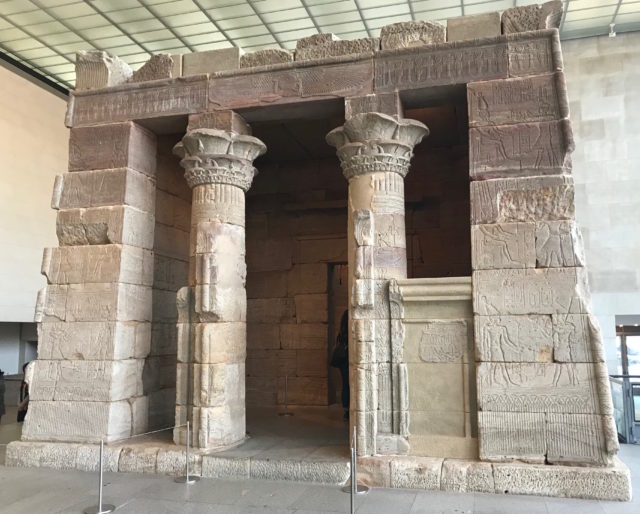 The Temple of Dendur is housed in the Sackler Wing at the Metropolitan Museum of Art in New York City. (DCNF/Ethan Barton)

Hightower and his wife, Laura Hightower, were visiting from California. Laura’s sister was addicted to prescription painkillers and her best friend had a problem with OxyContin for years, the couple told TheDCNF.

“What does The Met think about” the Sacklers’ revenue source? Laura asked TheDCNF. The Met repeatedly refused to comment on its financial ties to the opioid epidemic and aggressively avoided granting TheDCNF interviews.

In fact, rather than responding to the Hightowers’ remarks, a Met employee who did not provide her name told TheDCNF that reporters were not allowed to interview visitors without authorization. TheDCNF could not find any evidence of that policy.

Dale noted that The Met can argue that it’s “not taking drug cartel money” since Purdue Pharma is “a legitimate company,” even though the opioid epidemic is tied to organized crime and drug dealers.

Prescription drugs often make their way to the black market through various means, and nearly 80 percent of heroin users since 2011 started with prescription opioids, according to the National Institute on Drug Abuse.

“Prescription drugs are the worst problem in the United States,” Dale told TheDCNF, though he and Laura said there was also a legitimate medical need for painkillers.

“It just feels like another thing is tainted,” Dickson told TheDCNF. “I never thought about whether charitable institutions should vet where the money came from.”

“They should at least look at who’s giving the money and where it’s coming from,” she continued. “I feel like it’s probably a conversation they should have at least internally.” 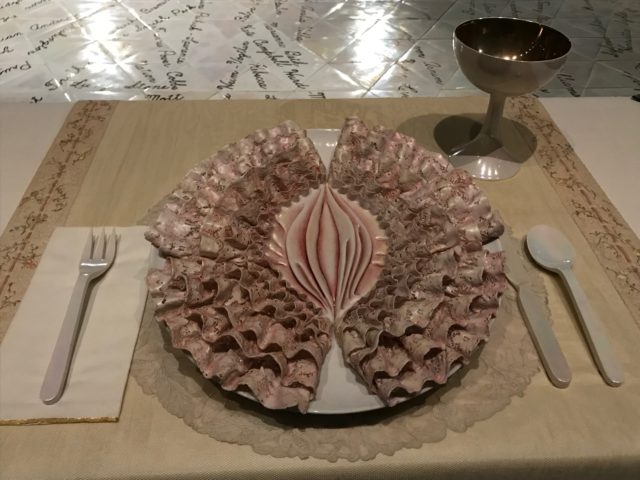 A place setting at The Dinner Party Exhibit at the Elizabeth A. Sackler Center for Feminist Art at the Brooklyn Museum in New York City. (DCNF/Ethan Barton)

Dickson suggested that museums and other beneficiaries stop putting donors’ names on buildings to avoid the potential of getting swooped into future scandals.

“I have no problem with a museum taking money from someone. We have to take money where we can get it. I do have a problem with a wing being named after them,” Thomas added.

Dickson noted that the Sacklers’ connection to the opioid epidemic is “kind of a secret” since Purdue – unlike wings of the family’s beneficiaries – doesn’t bear the Sackler name.

Both women knew of someone who died of an opioid overdose, though they weren’t certain whether it was from prescription painkillers or street drugs like heroin.

“I feel it’s only a matter of time before I do know someone directly,” Dickson told TheDCNF.

She also pointed out the irony that the Brooklyn Museum’s feminist center is named after Arthur Sackler’s daughter. Arthur – who was the family’s patriarch until his death in 1987 – pioneered modern-day pharmaceutical marketing and was posthumously inducted into the Medical Advertising Hall of Fame for making valium the first $100 million drug.

Valium’s advertisements often targeted women, according to The Telegraph, and Vice reported that women were prescribed valium far more frequently than men in the 1960s. Additionally, The Rolling Stones song “Mother’s Little Helper” focuses on a woman’s valium dependence.

Arthur’s brothers, Mortimer and Raymond Sackler, bought his share of the company soon after his death.

“Oxycontin was never a part of Dr. Sackler’s body of work or his estate,” Cam Felix, a spokeswoman for Arthur’s side of the family, previously told TheDCNF in a statement. “None of his descendants have had any involvement with, nor ownership of, Purdue Pharma or benefitted from the sale of Oxycontin.”

Regardless, the Brooklyn Museum received $600,000 from Arthur’s brothers’ foundations, which are funded with OxyContin money. Most of that was earmarked for the Sackler center’s curator.

“It is important to note that Purdue Pharma manufactures and sells medicine that is approved and regulated by the U.S. Food and Drug Administration for the treatment of severe pain,” Purdue spokesman Bob Josephson told TheDCNF in a statement.

“The opioid crisis is a multifaceted public health challenge, and despite how our critics portray us, for more than 15 years, this company has led industry efforts to fight prescription drug abuse which includes collaborating with law enforcement, funding state prescription drug monitoring programs and enhancing their interoperability, and supporting drug take back programs,” he continued.

A spokesperson for the Sackler family did not return a request for comment.

This is the sixth article in the American Cartel series about the billionaire Sackler family, Purdue Pharma and the opioid epidemic. Read the first, second, third, fourth and fifth.