A California city councilman and high school history teacher at El Rancho High School in Pico Rivera, Calif, was caught on video disparaging the United States military and calling its members “dumbshits” who are not “high-level thinkers.”

Gregory Salcido is a current member of the Pico Rivera City Council.

Three profanity-laced videos surfaced on Facebook Friday of Salcido declaring to his students that members of the military are dumb people who joined because they were poor students and that they are the “lowest of our low” of the country.

“They’re the frickin’ lowest of our low,” Salcido can be heard saying.

Three video of Salcido’s comments were posted to Facebook by a family friend of the student who took it and they quickly went viral. The student, who wished to remain anonymous, is the son and nephew of military veterans and told the local paper, “It was so disrespectful to my dad and my uncles and all veterans and those still in the military.”

Throughout the three videos, Salcido can be heard using vulgar language to describe the military as failed students with no other options but to serve. “We’ve got a bunch of dumbshits over there. Think about the people who you know who are over there — your freaking stupid uncle Louis or whatever, they’re dumbshits. They’re not, like, high-level thinkers, they’re not academic people, they’re not intellectual people, they’re the freaking lowest of our low. Not morally, I’m not saying they make bad moral decisions, they’re not talented people,”

This is not Salcido’s first brush with controversy. In 2012, he was accused of smacking one of his students who he said was disruptive.

The school district is investigating the videos and refused to comment on a “personnel matter.”

Salcido is currently on vacation, but posted a vague comment to his Facebook page about the controversy.

Other posts on Salcido’s Facebook pages show he is not a fan of President Donald Trump. 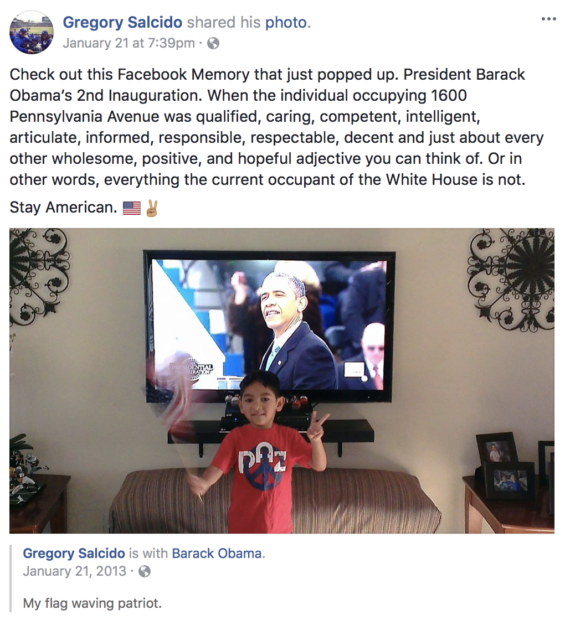 On the official webpage for his city council job, Salcido’s bio reads, “Councilman Salcido credits his students for being a constant reminder that keeping a positive and optimistic disposition is necessary for a productive future.”