The president and vice president attended the swearing in ceremony for Health and Human Services Secretary Alex Azar Monday afternoon, after which POTUS managed to land a shot on Senate Minority Leader Chuck Schumer.

During the event, Trump commented on the importance of HHS and complimenting his new pick for the position. Trump’s last HHS secretary, Tom Price, resigned after a scandal involving his usage of a private aircraft for travel.

After the event, Trump was asked about his upcoming State of the Union remarks.

“It is going to be good. We worked on it hard,” he explained, adding that the speech will cover “the success with the markets and the tax cut” and immigration. Trump noted that he is hoping for a bipartisan immigration bill from Congress.

The most recent attempt at a DACA deal fell through and Democrats forced the government to shut down. The White House called the shutdown “The Schumer Shutdown.” Ultimately, Democrats capitulated to the GOP and reopened the government.

As Trump was leaving the press conference Monday, a reporter yelled about Chuck Schumer coming down to the White House to negotiate again:

“You going to bring Senator Schumer down here again?” one of the reporters yelled at the President as he left the room.

Trump paused, turned around to look at the press as he exited the room and said two words: 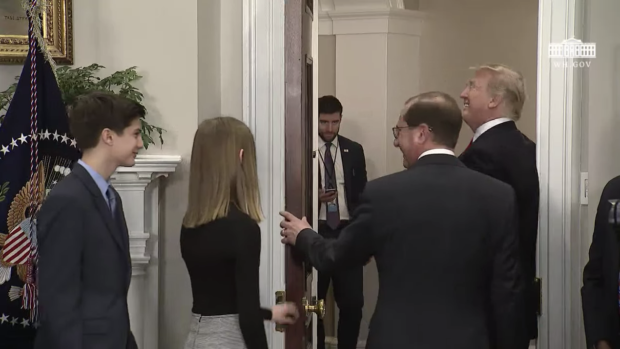 Trump smiled and exited the room.