The ongoing saga of the FBI investigation into Russian collusion and the Trump campaign took a dramatic turn this week when FBI Deputy Director Andrew McCabe resigned Monday.

The move is widely seen as a necessary one, since reports indicate that McCabe was snared in an internal investigation into the handling of Hillary Clinton’s email server.

When Donald Trump fired Comey, McCabe took over for him as acting Director of the FBI. Comey tweeted support for his former associate, saying he “served with distinction.” Comey also called the people who have attacked McCabe, like President Donald, “small people.”

Special Agent Andrew McCabe stood tall over the last 8 months, when small people were trying to tear down an institution we all depend on. He served with distinction for two decades. I wish Andy well. I also wish continued strength for the rest of the FBI. America needs you. 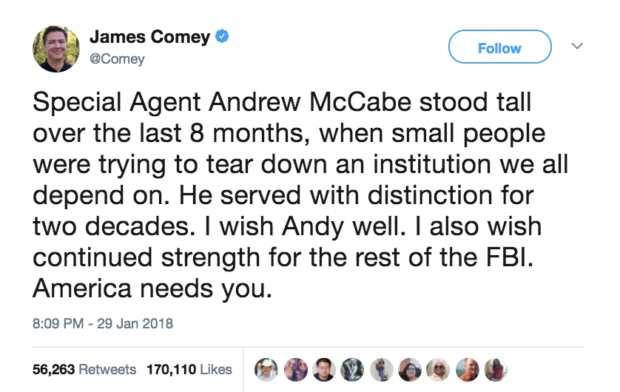 In response to the tweet, Benghazi hero Kris Paronto had a scorching take. He accused Comey of “fake patriotism” and said he served with “zero integrity.”

Served with corruption and zero integrity, just like you James. Go away, and take your fake patriotism with you 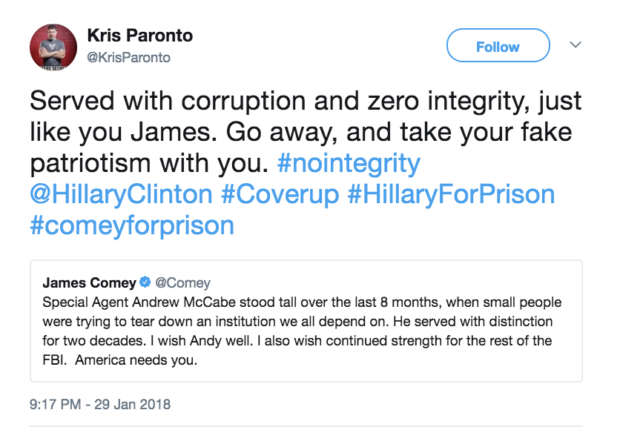 This is a fight Comey will most likely not win.