Legend has it, when French Queen Marie Antoinette was told her subjects had no bread, she said: “Let them eat cake.”

Historians disagree on the accuracy of the account, but the people understood the point. Being out-of-touch is a terrible look for any leader or politician.

Pelosi and the Democratic party have adopted a very Marie Antoinette-esque plan of attack toward GOP tax reform.

The Democrats have taken a hard messaging stance that the billions in tax cuts, pay increases and bonuses American workers are receiving as a part of the GOP tax cut are nothing more than “crumbs.” Pelosi has referred to the payments as “crumbs” three times now in public appearances. Her Democratic counterpart, Debbie Wasserman Schultz, has said that $1,000 bonuses don’t “go very far for anyone.”

Their comments have been received poorly by the commenting public and the GOP.

Pelosi piled on to her the Marie Antoinette-esque messaging Monday afternoon in an interview with the Washington Post. The interviewer asked Pelosi what kept her up at night, and she responded, “Eating too much chocolate during the day.”

She went on to say that the GOP tax cuts are a “dark cloud” that keeps her awake, calling the bonuses “crumbs” once more.

Late last week, Pelosi compared American workers to a little mouse caught in a mouse trap eating a tiny piece of cheese, and made her original “crumbs” comment before doubling down on it to the Washington Post.

Pelosi also tweeted this cartoon regarding her “crumbs” comment:

Pretty obnoxious the GOP thinks workers should be weak-kneed with gratitude for corporations giving them pennies while pocketing a multi-billion dollar tax break stolen from the future of the middle class. #GOPTaxScam 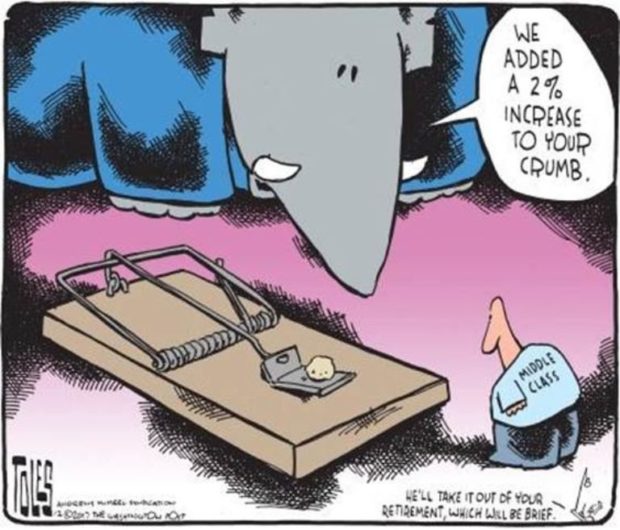