Former President Jimmy Carter praises President Donald Trump in an interview set to be released this coming weekend for his about face on North Korea.

Carter told CBS Sunday Morning that Trump sent a team down to Carter’s home in Georgia to brief him on his decision to broker a meeting with Kim Jong Un in the coming months. 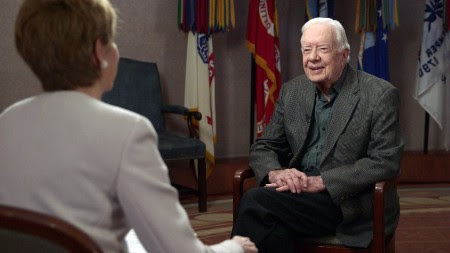 “Just this week — I had a representative from the White House who came down and gave me the latest developments with North Korea,” the 93 year old explained. “I have had some criticisms of some of the public statements that President Trump has made about — fire and brimstone and that sort of thing — being utilized.”

Carter would go on to clarify that Trump “reacted quite well” to North Korea’s invitation to meet.

Despite the White House’s commitment to meet with Kim before May, Trump’s new national security adviser John Bolton has cautioned against fully trusting North Korea.

On Wednesday, he made the case against a limited denuclearization arguing that the North Korean regime could still sell nuclear weapons to anti-American actors, including Iran and Al Qaeda.