Arrests of illegal aliens along the southwest border ticked up slightly in April from the previous month, marking a sustained rise in illegal immigration that has reversed gains made in the early months of President Donald Trump’s administration.

Border agents arrested or turned away 50,924 people in April — up eight percent compared to March — according to Customs and Border protection figures released Thursday. But when compared to April 2017 — a month that saw a historically low number of illegal crossings — southwest border apprehensions spiked by an astonishing 233 percent year-over-year.

Border arrests are used as a proxy for overall levels of illegal immigration. The idea is, assuming a given standard of border security, more apprehensions mean more illegal aliens are slipping undetected into the U.S., and vice versa

As they were in March, total border arrests and inadmissible entries at the U.S.-Mexico border were higher in April than they were in the same month of the last two years of Obama’s administration. Illegal immigration has risen in nearly every month since tumbling to historic lows last spring, after Trump took office, promising to crack down on border enforcement. Since April 2017, the only month-to-month decline in border apprehensions occurred in January, according to CBP data. 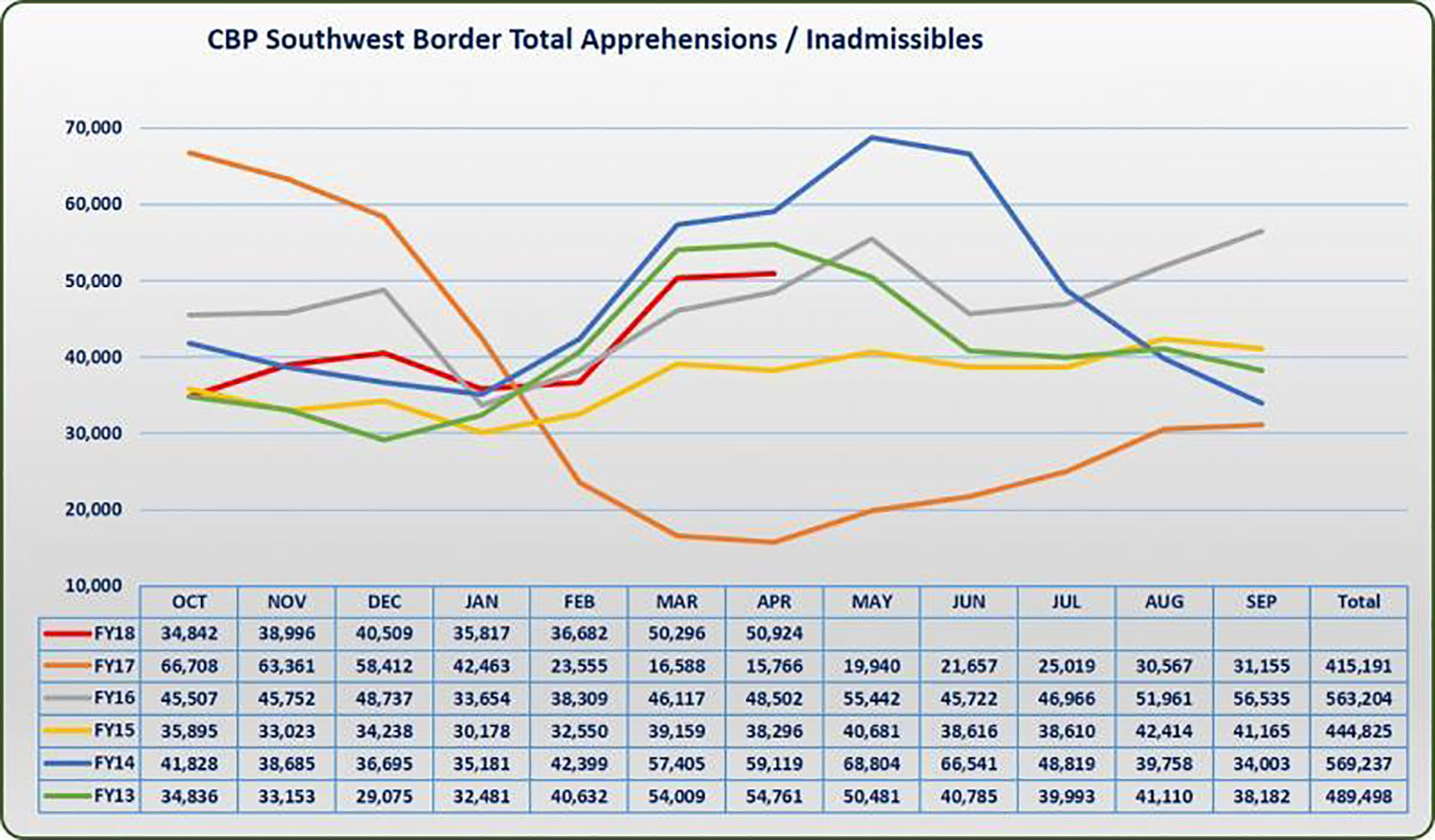 Border arrests often climb in the spring months, as warmer weather and the prospect of seasonal employment entice illegal immigrants to cross the southwest frontier. However, the persistent rise in apprehensions suggests the much-vaunted “Trump Effect” on illegal immigration has worn off completely, as Homeland Security Secretary Kirstjen Nielsen acknowledged in April.

The Border Patrol nabbed 38,234 illegal immigrants in April, while CBP officers, who run the ports of entry, recorded 12,690 people who arrived without authorization to enter, according to CBP’s numbers. Among those caught were roughly 15,000 people traveling in family units and another 5,300 unaccompanied alien children (UAC) — both categories of illegal migrants that must be handled differently than adults traveling alone.

Trump’s administration has recognized the rising number of border arrests but says U.S. immigration laws are to blame for incentivizing illegal immigration. Nielsen urged lawmakers on April 26 to revise laws to make it easier to detain people — particularly UACs, who must currently be released into the “least restrictive” setting possible.

“If you have an alarm in your home and you catch a burglar, and you call the police and the police come; and in fact, it is an illegal entry into your home,” she said in a Congressional hearing. “But the police then tell you that they have absolutely no ability to detain or remove those criminals and the criminals stay in your house, you would not tell me that is home security. That is what we face at the border.”