Arrests of illegal immigrants along the southwest border spiked in March, surging past levels seen under the last two years of former President Barack Obama’s administration.

Border agents arrested or turned away 50,308 people last month, up 37 percent compared to February, according to Customs and Border Protection figures released Wednesday.

The total number of potential immigrants arrested or deemed inadmissible in March was roughly three times higher than in the same month in 2017, when there were just 16,588 apprehensions.

Border arrests are used as a proxy for overall levels of illegal immigration. The idea is, assuming a given standard of border security, more apprehensions mean more illegal aliens are slipping undetected into the U.S., and vice versa.

Illegal immigration across the southwest border tumbled to historic lows last spring but ticked up in nearly every month after that. Since April, the only month-to-month decline in border apprehensions occurred in January, according to CBP data. 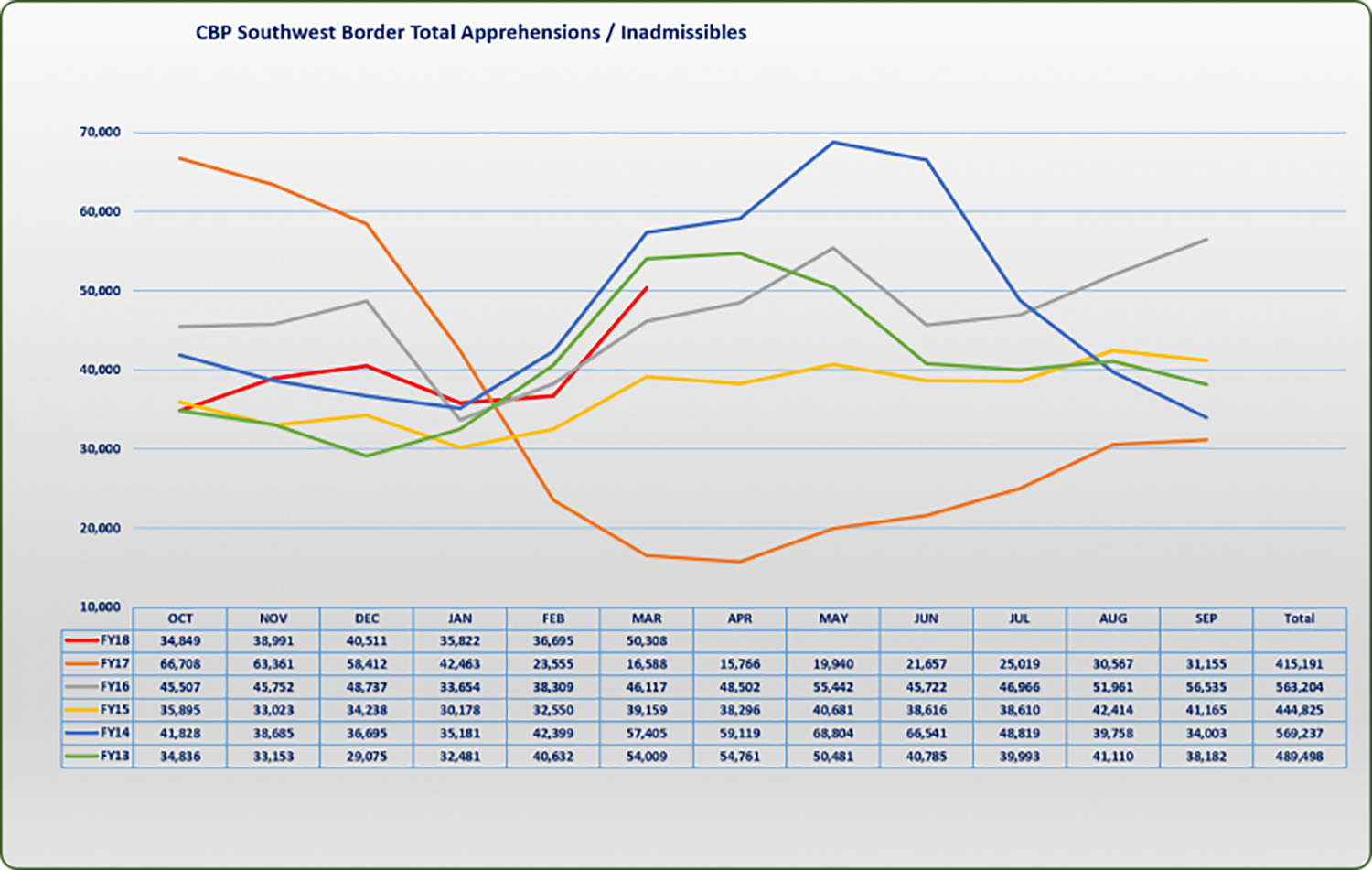 Border arrests often climb in the spring months, as warmer weather and the prospect of seasonal employment entice illegal immigrants. But the particularly dramatic increase in border apprehensions and inadmissables in March means illegal immigration is likely at higher levels than it was in the same month in 2015 and 2016. It also indicates the much-vaunted “Trump Effect” on illegal immigration has worn off completely, as Homeland Security Secretary Kirstjen Nielsen suggested at a Wednesday press briefing.

The border arrest figures came the same same day President Donald Trump signed an order deploying National Guard troops to the southwest border to support CBP’s enforcement mission. The government has not determined the number of troops to be deployed, but they could be activated as early as Wednesday night, Nielsen said.

The Trump administration has also sought to change U.S. immigration laws governing detention of unaccopanied children and family units, which it says encourage illegal immigration. The White House is expected to deliver to lawmakers a legislative package that would close these “loopholes” later in April.

“While we have been apprehending aliens at the border with historic efficiency — these illicit smuggling groups saw that our ability to actually remove those who come here illegally did not keep pace,” Nielsen said Wednesday. “They saw that there were loopholes they could exploit to avoid detention and removal.”

According CBP’s numbers, the Border Patrol nabbed 37,393 illegal immigrants in March, while CBP officers, who run the ports of entry, recorded 12,915 people who arrived without authorization to enter.

Among those were a rising number of unaccompanied minors and people traveling in family units — both especially troublesome categories for immigration authorities. About 13,000 were arrested, trying to cross the border illegally, and another 6,200 were deemed inadmissable at the ports of entry.