Three Americans returned to the United States early Thursday morning after at least a year in captivity in North Korea, and when they arrived, the president, accompanied by the first lady and the vice president, was there to welcome the tired men home.

North Korea released Kim Dong-Chul, Kim Hak-Song and Kim Sang-Duk (Tony Kim) into the custody of U.S. officials Wednesday, and they arrived at Joint Base Andrews outside Washington a little before 3 a.m. Thursday. The president boarded the plane to greet the released detainees and then emerged with them at his side, two of them holding their hands in the air.

On behalf of the American people, WELCOME HOME! pic.twitter.com/hISaCI95CB

Speaking briefly to reporters on the tarmac, which was adorned with a large American flag, Kim Dong-Chul, who spent more than two and a half years in prison in North Korea, said it all felt “like a dream,” adding, “We are very, very happy.”

The three men, although apparently healthy, will be examined by medical professionals and then debriefed by government officials. Afterwards, they will be released to their families. 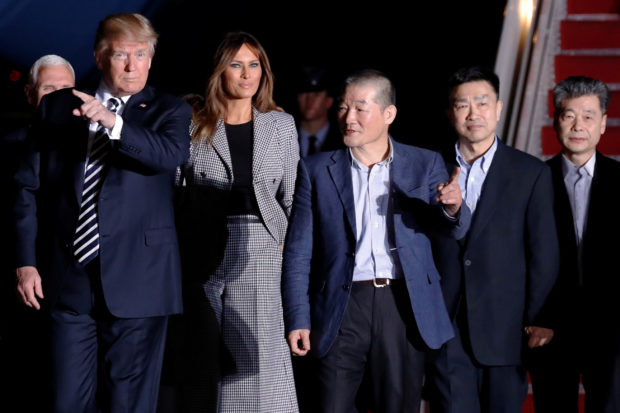 In an exchange with the press, the president celebrated the return of the three American prisoners and expressed optimism about his meeting with the North Korean leader.

“This is a special night for these three really great people,” Trump said, calling it a “great honor” to be able to welcome the three former prisoners home. “Frankly, we didn’t think this was going to happen,” he explained, “It’s a very important thing to all of us to be able to get these three great people out.”

He also publicly thanked North Korean leader Kim Jong Un, saying, “I really think he wants to do something and bring his country into the real world.” Commenting on the U.S.-North Korea relationship, the president declared, “We’re starting off on a new footing.”

“I think this will be a very big success,” he said of his upcoming landmark summit with Kim, “It’s never been taken this far, there’s never been a relationship like this. Some great things can happen, and that’s what we hope.”