Avenatti has been a media darling since announcing his lawsuit against the president.

Avanatti had a near-permanent seat in MSNBC and CNN green rooms over the past months, racking up hundreds of cable news media hits and glamming around D.C. cocktail parties. Avenatti’s stardom has vanished over the past week, however, after disturbing revelations about his past prove he may not be the champion of bullied women and the free press he claimed.

A report by the LA Times reveals that a judge ordered a law firm managed by Michael Avenatti to pay $10 million in damages, and Avenatti is personally responsible for millions in payments and back taxes that remain unpaid. Reporting by the Daily Caller revealed that Avenatti lost a sexual discrimination case to a pregnant employee and has yet to pay the $130,000 he owes her.

Research by Tom Bevan reveals that as Avenatti was racking up 174 cable TV appearances, Trump’s poll numbers were steadily rising: 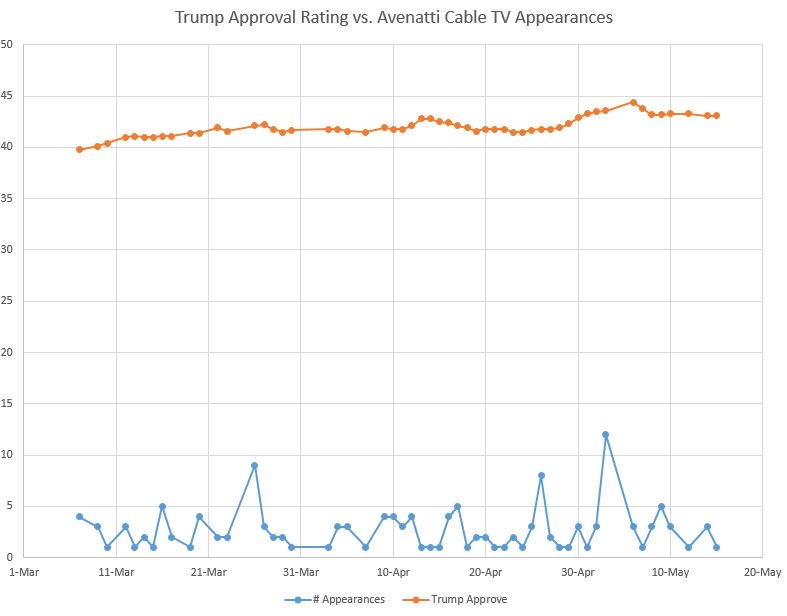 Just for fun, @realDonaldTrump job approval for last 10 weeks charted along w/@MichaelAvenatti‘s 174 cable tv appearances. (TV data courtesy of @theMRC). When Avenatti began his spree on March 7, Trump was at 39.8% approval in the RCP Average. As of May 15 he was at 43.1%. pic.twitter.com/FtvDEn30gL