“I think the best way to handle remarks like that is it’s not necessarily a push back against his [Trump’s] remarks. It’s to maintain the focus on the real issue,” the 30-year-old veteran player said after practice Tuesday, according to New York Daily News. 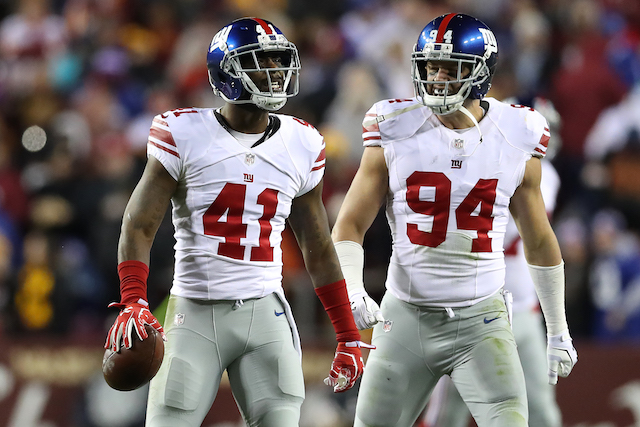 Cornerback Dominique Rodgers-Cromartie #41 of the New York Giants celebrates with teammate outside linebacker Mark Herzlich #94 after intercepting the ball against the Washington Redskins in the fourth quarter at FedExField on January 1, 2017 in Landover, Maryland. (Photo by Rob Carr/Getty Images)

“The real issue isn’t players being against a president or against a country,” he added. “It’s about players being for unity, and they want to create an atmosphere with law enforcement, with others in their community that we share in the locker room.”

“You go in the locker room and guys from every single race, every single demographic, every single religious background, and we all are just a team,” he continued.  “And so I think we see that, what’s possible. And I would love Trump to come down here and hang out in our locker room and see what locker room talk’s really about, and talking about our night nurses and our babies– this is what we talk about, it’s a family.”

Herzlich, who sits on the National Football League Players’ Association leadership council, made the statement following Trump’s comment’s last week about how if a player doesn’t stand maybe they “shouldn’t be in the country.”

Trump’s tweet followed the NFL’s new policy that states players who take the field with their teammates but don’t stand for the national anthem will incur a fine for their team.