The New York Times whitewashed several Democrats’ ties to Nation of Islam leader Louis Farrakhan in an article that ran in Wednesday’s paper.

Farrakhan is a notorious racist and anti-Semite who has praised Adolf Hitler as a “very great man,” called white people “devils,” blamed Jews in Hollywood for gay marriage and described Jews as “satanic.”

Several congressional Democrats have ties to Farrakhan and the leaders of Women’s March have publicly declared their support for him.

The Times’s article on Wednesday focused on Democratic congressional candidate Leslie Cockburn, a former journalist running to replace Virginia Republican Rep. Tom Garrett. Virginia Republicans have accused Cockburn of anti-Semitism over an anti-Israel book that she authored in 1991.

The Times portrayed the accusations against Cockburn as emblematic of a larger battle on the Left.

“[F]or the Democratic Party, Ms. Cockburn’s candidacy could come to represent more than a single House seat,” wrote reporters Thomas Kaplan and Michael Tackett. The two reporters went on to paint a misleading picture of Democratic ties to Farrakhan:

The Democratic National Committee’s deputy chairman, Representative Keith Ellison of Minnesota, has spent years trying to get beyond past associations with Louis Farrakhan, the anti-Semitic leader of the Nation of Islam. But conservative news media continues to try to tar Democrats by linking them to Mr. Farrakhan, and Mr. Trump has used his Middle East policies to try to drive a wedge between Jewish voters and the Democratic Party — even as openly anti-Semitic candidates in Wisconsin, Illinois and California run for office as Republicans.

That paragraph was misleading in three ways.

First, as The Daily Caller reported and as a Washington Post fact-check confirmed, Ellison actually misled the public for years about his relationship with Farrakhan.

The Times’s depiction — that Ellison “spent years trying to get beyond past associations with Louis Farrakhan” — resembles Ellison’s own spin. Here’s how Ellison answered questions about his ties to Farrakhan in a Dec. 14, 2016 appearance on MSNBC’s “Morning Joe”:

We’re talking about something that happened in 1995. This was the year that the Million Man March took off. People were attacking the march at the time. . . . Man, I’m telling you back in 2006 and before, I disavowed them. That’s the ridiculous thing about this, that we keep on having to answer this kind of stuff.

Second, The NYT claimed that “conservative news media continues to try to tar Democrats by linking them to Mr. Farrakhan” and linked to a DCNF article. The NYT did not reach out to TheDCNF for comment and didn’t respond to a request for comment on this report.

In addition to impugning this reporter’s motives without citing any evidence whatsoever, The Times portrayed reporting on Democrats’ Farrakhan ties as akin to a smear.

The Times did not mention that Democratic Illinois Rep. Danny Davis praised Farrakhan in three different interviews with this reporter in February and March, including in a March 5 interview where Davis said he wasn’t bothered by Farrakhan’s answer to “the Jewish question.”

Davis’ hometown paper, the Chicago Tribune, slammed the congressman for his relationship with Farrakhan in an editorial that cited TheDCNF’s reporting.

Democratic Sen. Brian Schatz of Hawaii called Farrakhan “unacceptable in a progressive coalition or any political coalition” on March 8 after Farrakhan again accused Jews of secretly controlling the FBI to persecute black people.

“Antisemitism [sic] has no place in American society,” Schatz wrote.

That same day, Democratic South Carolina Rep. James Clyburn declined to condemn Farrakhan‘s anti-Semitism in a statement addressing why he shared a stage with the Nation of Islam leader. Clyburn, the number three Democrat in the House, still has yet to denounce Farrakhan. (RELATED: Maxine Waters Attended Nation Of Islam Convention Where Farrakhan Defended Suicide Bombers) 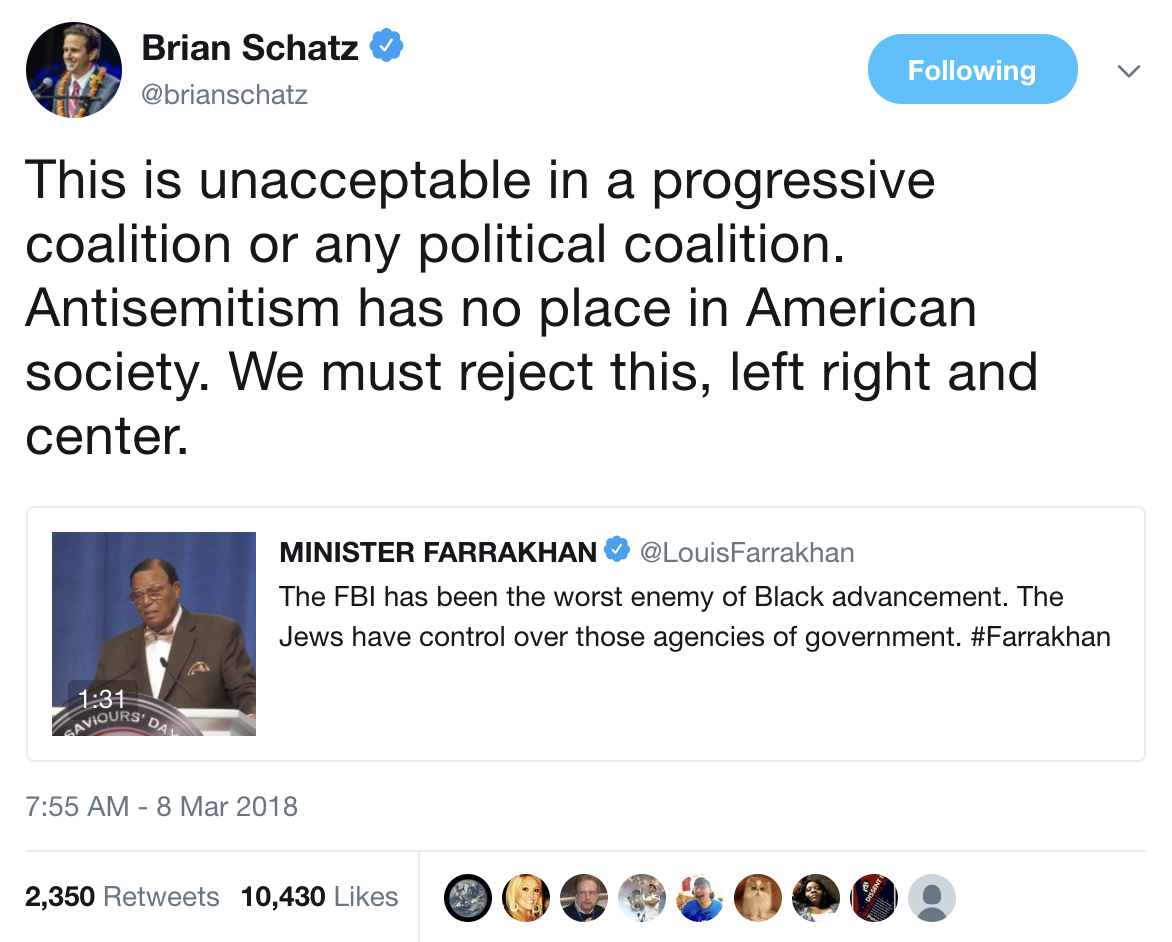 It took Davis just under six weeks to distance himself from Farrakhan’s anti-Semitism after praising the Nation of Islam leader as an “outstanding human being” in a Feb. 5 interview with this reporter.

In a March 17 interview with TheDCNF, Davis reversed his position on Farrakhan and claimed he was now bothered by Farrakhan’s racism and anti-Semitism. But “other than that,” Davis said, Farrakhan does “outstanding work.”

Third, The Times used fringe anti-Semites denounced by the Republican Party to downplay ties between Farrakhan and longtime Democratic members of Congress.

The paper noted that “openly anti-Semitic candidates in Wisconsin, Illinois and California” are running for Congress as Republicans, but didn’t inform readers that Republicans have denounced and condemned all three anti-Semites, none of whom have a serious chance of winning election.

Meanwhile, Democratic politicians who refuse to renounce their association with a prominent racist and anti-Semite remain influential members of Congress.