Washington Redskins announced Tuesday that they will honor the 1987 replacement players with Super Bowl rings at a ceremony next week.

The replacement team took the field during the NFL players’ strike that season and won all three of the games they played. The special event will take place next Tuesday at the club’s practice facility, according to the Associated Press, with the players and general manager of the ’87 NFL champions, Charley Casserly, on hand. 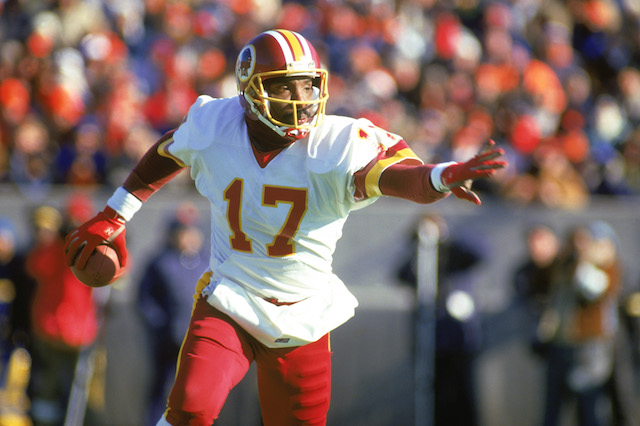 1987: Doug Williams #17 of the Washington Redskins scrambles with the ball during a 1987 NFL season game. (Photo by: Jonathan Daniel/Getty Images)

“Their contributions are part of Redskins history and represent an integral reason why a Lombardi Trophy from the 1987 campaign resides in our facility today,” Redskins owner Dan Snyder explained.

The strike took place between week four and week six. In the first game with the substitute players, the team defeated the St. Louis Cardinals 28-21. The following week, the replacement team beat the then-Super Bowl champion New York Giants 38-12. Then the  substitute players played the Monday night game when the Redskins beat their rivals the Dallas Cowboys 13-7.

The next week all the regular players took the field. The replacement players helped the team go 11-4 that season. The Redskins then went on to beat the Denver Broncos in the Super Bowl 42-10.

1
'Can I Talk Now?': Things Get Tense When Martha MacCallum Presses Sen. Chris Coons On Ambassador Firing
Media
2
'We're Kicking Your Ass!' Greg Gutfeld And CNN's Oliver Darcy Duke It Out Over 'The Five's' Impeachment Coverage
Media
3
German Authorities Find ‘Weapons Of War’ During Raid Near Radical Mosque
World
4
HILL: Davos Globalists Get Trumped Once Again
Opinion
5
'Get Rid Of Her': Recording Appears To Show Trump Ordering Removal Of Ambassador To Ukraine
Politics