A Virginia school board thrust through changes to its sex education curriculum Thursday despite around 90 percent of public respondents disapproving of the changes.

The Fairfax County School Board passed changes including the replacement of “biological sex” with “sex assigned at birth” and the teaching of an HIV drug with “life-threatening side effects,” reported Fox 5. School board member Elizabeth Schultz reported the vote as 10-0 with herself and one other board member, Tom Wilson, abstaining, when speaking with The Daily Caller News Foundation.

Starting in fall 2018, students enrolled in Fairfax County Public Schools (FCPS) will learn about the HIV prevention drug Pre-Exposure Prophylaxis (PrEP), which “can cause serious, life-threatening side effects” including “a buildup of lactic acid in the blood (lactic acidosis) and liver problems,” according to the National Institutes of Health.

The Family Life Education Curriculum Advisory Committee (FLECAC) proposed this and the other changes considered by the board. One FLECAC member, Dan Press, has called supporters of President Donald Trump the “American Taliban.” 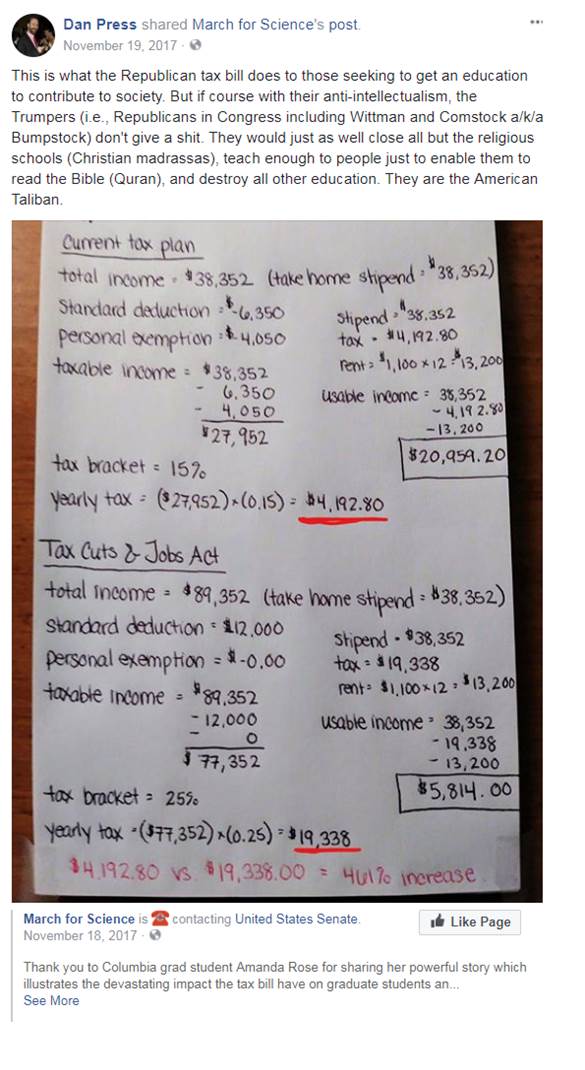 “The rogue Fairfax County School Board once again cast a rigged vote which ignored a stunning level of parent and the community input,” Schultz told TheDCNF. “The level of participation in the online survey about FLE demonstrated a clear desire of parents and the community to be heard — as much as a 5,275 percent increase in the number of comments this year over responses in recent years — no, that’s not a misprint: a five thousand two hundred and seventy-five percent increase in input received.”

The district considered changing a portion of the curriculum stating “students with questions or concerned about their sexual orientation or gender identity will be advised to talk with a parent, member of the clergy, or trusted adult, or counselor” by omitting “clergy” and “counselor.” The school board decided to keep the “clergy” mention, Schultz said.

An average of 961 respondents to the district’s request for public comment opposed each proposed change, whereas an average of 131.25 respondents supported each of them. (RELATED: Nearly 90 Percent Of Public Opposed To Virginia County’s Sex Ed Changes)

“The vote to ignore parents and community input, which opposed the changes at a greater than 8 to 1 margin, and to move forward to adopt this false and ideologically-driven content circumvents parental involvement, puts children at risk and undermines the rights of citizens to a transparent, open and accountable limited government,” Schultz told TheDCNF, describing Thursday night’s vote, which can be viewed below.

“The most important educational experts that we should be listening to are parents,” the school board member said at the meeting.

Schultz compared the changes to the sex ed curriculum to an unwanted cake.

“The public comes back and says not only do we not care about what flavor cake we want; we don’t want cake at all,” she said.

Schultz also criticized parents’ ability to opt out of sex ed curriculum, noting that what is learned in the classroom does not stay there.

“The failure to opt out by parents cannot be deemed to be informed consent to engage on the most detailed sexually explicit content for minor children without the parents still understanding,” she told TheDCNF.
“The FCPS Board does not care that more than 80 percent of the public opposed the FLE changes,” board member Wilson, who also abstained from the vote, told TheDCNF. “Those who voiced opposition are reasonable people, with reasonable, widely held beliefs about raising children. Their opinions are being ignored.”
“My fellow Board members’ apparent desire is to diminish the voice of parents, while at the same time exercising complete control of what is taught to children in sex ed,” he said.
TheDCNF reached out to the other 10 school board members for comment, but received none in time for press. A Friday FCPS press release linked to two items: changes to the district’s student rights and responsibilities and a student’s acquisition of a scholarship. Changes to the sex education curriculum were not linked.