The Washington Post stealth-edited an article incorrectly claiming the young child on the cover of Time Magazine was separated from her mother, only adding a “clarification” after The Daily Caller reached out for comment.

The original article — written by Eli Rosenberg — asserted that the image of the crying immigrant girl staring up at President Donald Trump was a powerful statement about family separations on the border.

The article itself repeated the now-debunked claim that the child was taken away from her mother, reading, “Time magazine ran a cover that used one of the images that has been most resonant in this past week, taken of a young girl crying as her mother was patted down by a Border Patrol agent before the two were separated.” [Emphasis added] 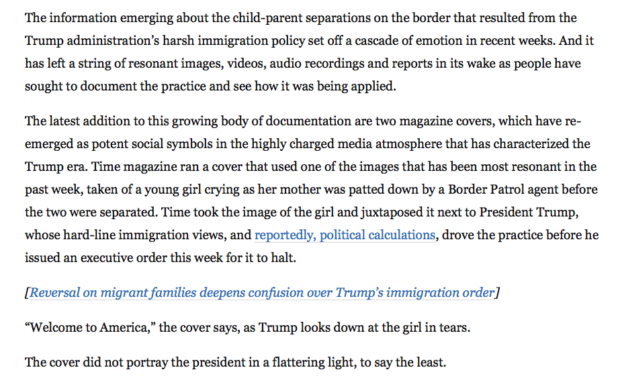 As the father of the young girl, border patrol agents and eventually Time indicated, at no point were the mother and daughter ever separated. The child was briefly set down for the mother’s pat-down, but the pair were quickly reunited after the search. (RELATED: Everything The Media Got Wrong About The Crying Girl On The TIME Cover)

The Washington Post edited Rosenberg’s article to fix the error, but they issued no editor’s note, correction, or clarification that anything had been changed despite the fact that the original article was on the website for at least 12 hours.

The new headline, emphasis added, was changed to “Time and New Yorker covers make powerful statement about the border crisis.”

The copy was also changed, now reading, “Time magazine’s cover used one of the images that has been most resonant in the past week, taken of a young girl crying as her mother was patted down by a Border Patrol agent before the two were detained.” [Emphasis added] 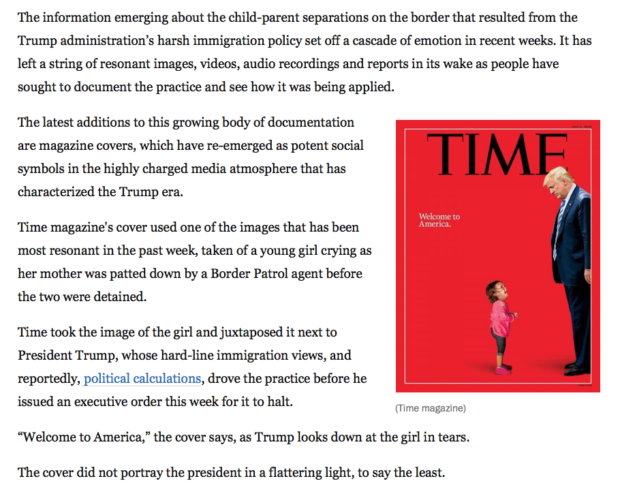 The Daily Caller reached out to Rosenberg and WaPo editors for comment on why readers were not informed that the headline and story were changed.

Molly Gannon, a communications manager for WaPo, said at 2:50 PM ET that they were going to add a clarification on the story. The piece remained on the website for at least 16 hours before receiving the note that it was edited.

The top of the story now reads, “Clarification: The initial version of this story said the child depicted on Time’s cover had been separated from her mother, based on the magazine’s account. As The Washington Post and others have since reported, the child was not separate from her mother during their encounter with a Border Patrol agent. The story has been updated.”

“Clarifications and corrections should be clear, concise and direct,” WaPo’s publishing guidelines state. “They must be comprehensible to anyone who reads them, including readers who may have missed the story that is being corrected. Anyone reading the correction should be able to understand how and why the mistake has been corrected.”

The Washington Post declined to comment on why the clarification was not included when the article was first updated.

Despite their own failure to properly alert readers to the shortcomings of Rosenberg’s article, WaPo had no issues dragging Time magazine. Aaron Blake wrote an article on Time’s “major mistake” and accused them of making a “big assumption” about the young child’s status.

“You could perhaps argue that the photo illustration wasn’t meant to be taken literally, but anybody who saw the cover against the backdrop of the week’s news would assume this girl — pictured alone — had been separated from her mother,” Blake wrote.

“That’s a pretty bad mistake,” Blake admitted. “The use of this photo damaged that entire effort — no matter how pristine the motives were.”