CHICAGO — Thousands of people gathered in Daley Center Plaza on a sweltering Saturday to protest the Trump administration’s immigration policies, part of a nationwide day of outrage sparked by the separation of illegal immigrant families at the southwest border.

Despite oppressive humidity that pushed the heat index to 105 degrees, a huge crowd filled the plaza for a rally before marching through closed streets in the heart of Chicago’s downtown Loop district.

As they marched, the demonstrators — an incongruous mix of suburban families, college students, ethnic activists, labor radicals and liberal retirees — chanted slogans calling on the government to reverse its tough immigration enforcement tactics.

“No hate. No fear. Immigrants are welcome here!” and “This is what democracy looks like!” they shouted. 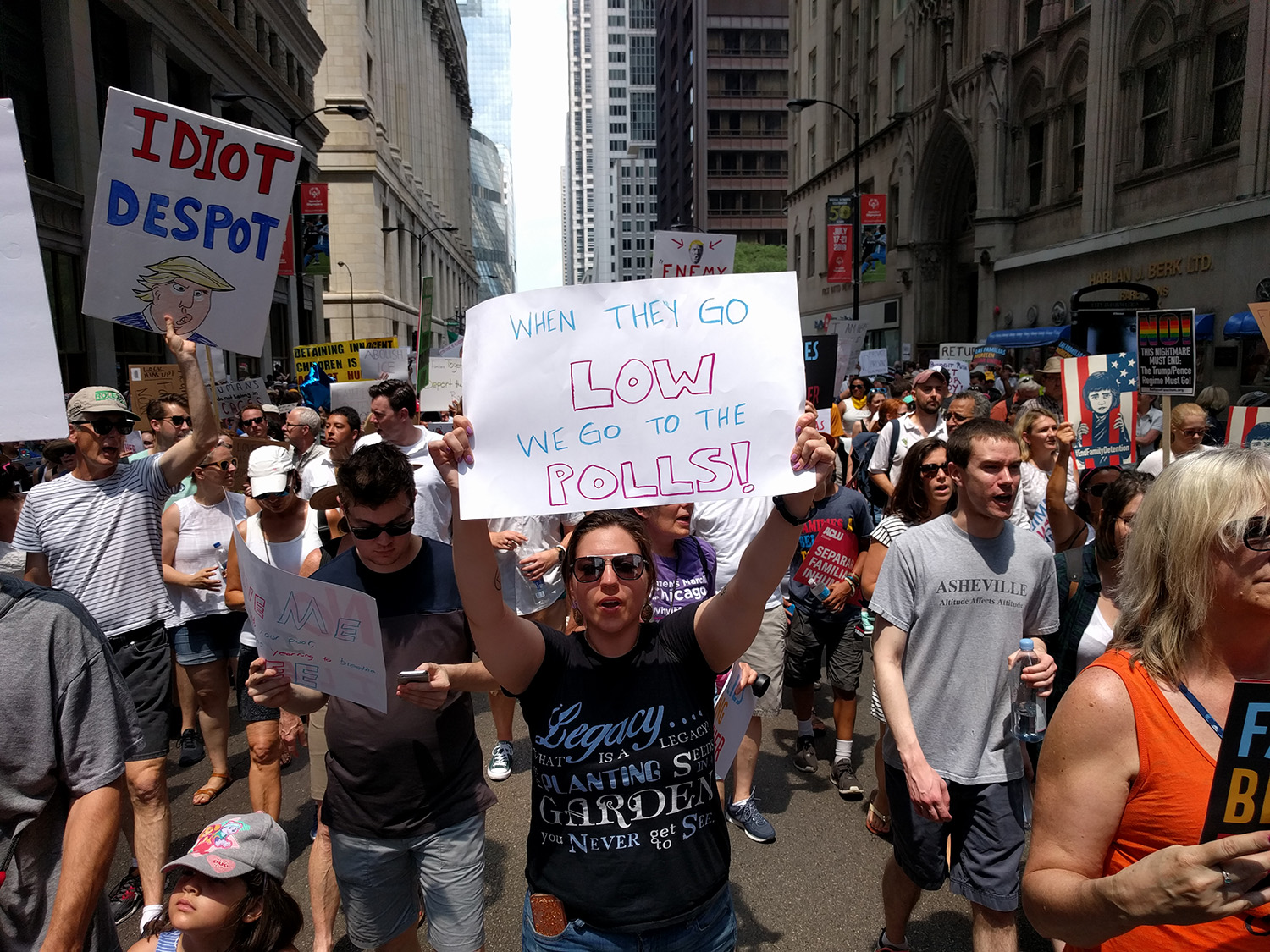 Protesters march down Clark Street in downtown Chicago in a mass demonstration against the Trump administration’s immigration policies on June 30, 2018. (Will Racke/TheDCNF)

Some of the more strident demonstrators called for the abolition of Immigration and Customs Enforcement (ICE), the agency in charge of locating and deporting illegal immigrants in the interior of the country.

Although it does not carry out family separations at the border, ICE has become increasingly reviled among the progressive left and, recently, mainstream Democratic politicians such as Sen. Kirsten Gillibrand of New York, who on Thursday became the first senator to call for the complete dismantling of the agency. 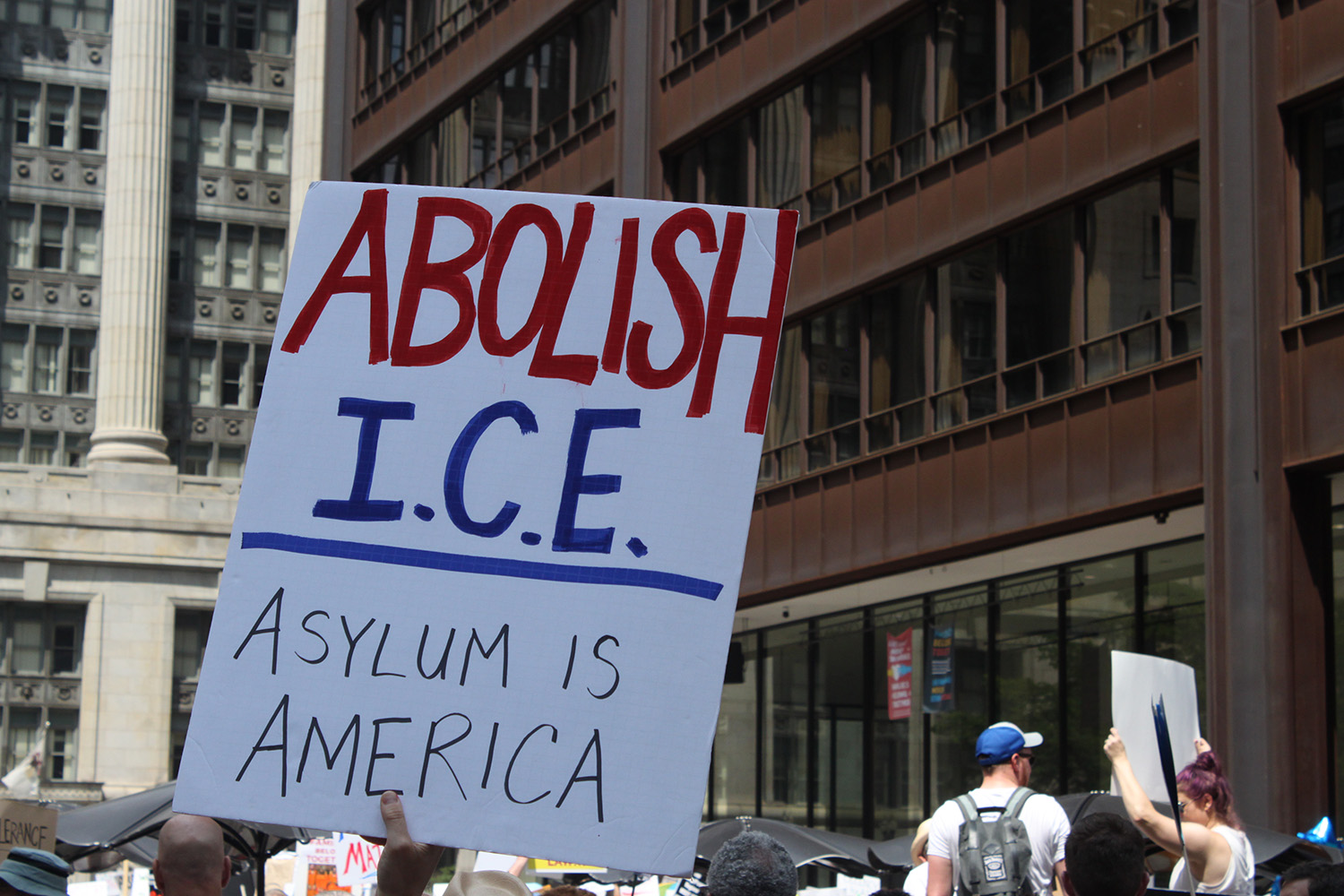 A protester holds up a sign calling for the abolition of Immigration and Customs Enforcement at a demonstration in Chicago on June 30, 2018. (Will Racke/TheDCNF)

Organized by the Latino Policy Forum and 16 other civil rights and labor groups, the Chicago march was one of the largest of more than 700 protests that took place across the country on Saturday. Between 15,000 and 20,000 people participated, organizers said, basing their estimate on responses to a Facebook page set up for the protest.

The day of national protest came in response to the Trump administration’s aggressive enforcement of immigration laws, particularly its now-rescinded policy of prosecuting as many illegal immigrants for unlawful entry as possible. That zero-tolerance policy had led to the separation of more than 2,000 migrant children from their parents, a controversial practice that immigration activists, religious leaders and Trump’s political opponents called needlessly cruel and inhumane.

Under intense political pressure, Trump on June 20 ordered immigration authorities to detain migrant families together instead of separating them while adults are prosecuted. Then the acting commissioner of Customs and Border Protection on Monday said border agents would no longer refer cases of misdemeanor illegal entry to federal prosecutors, citing a lack of space in family detention facilities. (RELATED: Trump Signs Executive Action To Stop Family Separation)

Those two moves effectively returned the Trump administration’s immigration enforcement policy to its pre-“zero tolerance” status quo. But for many protesters at the Chicago rally, detaining illegal immigrant families together indefinitely, as the administration is now seeking to do, is as unacceptable as family separation.

“I think it’s important to protest when [the government] does something antithetical to the values we hold as Americans,” Gabby Frates, 29, told The Daily Caller News Foundation. Frates, a native of Cleveland living in Chicago, said she had been politically active prior to the Trump administration, but was especially concerned about its immigration policies.

“We can’t just sit back and let it happen,” she said, referring to the separation of illegal immigrant families. 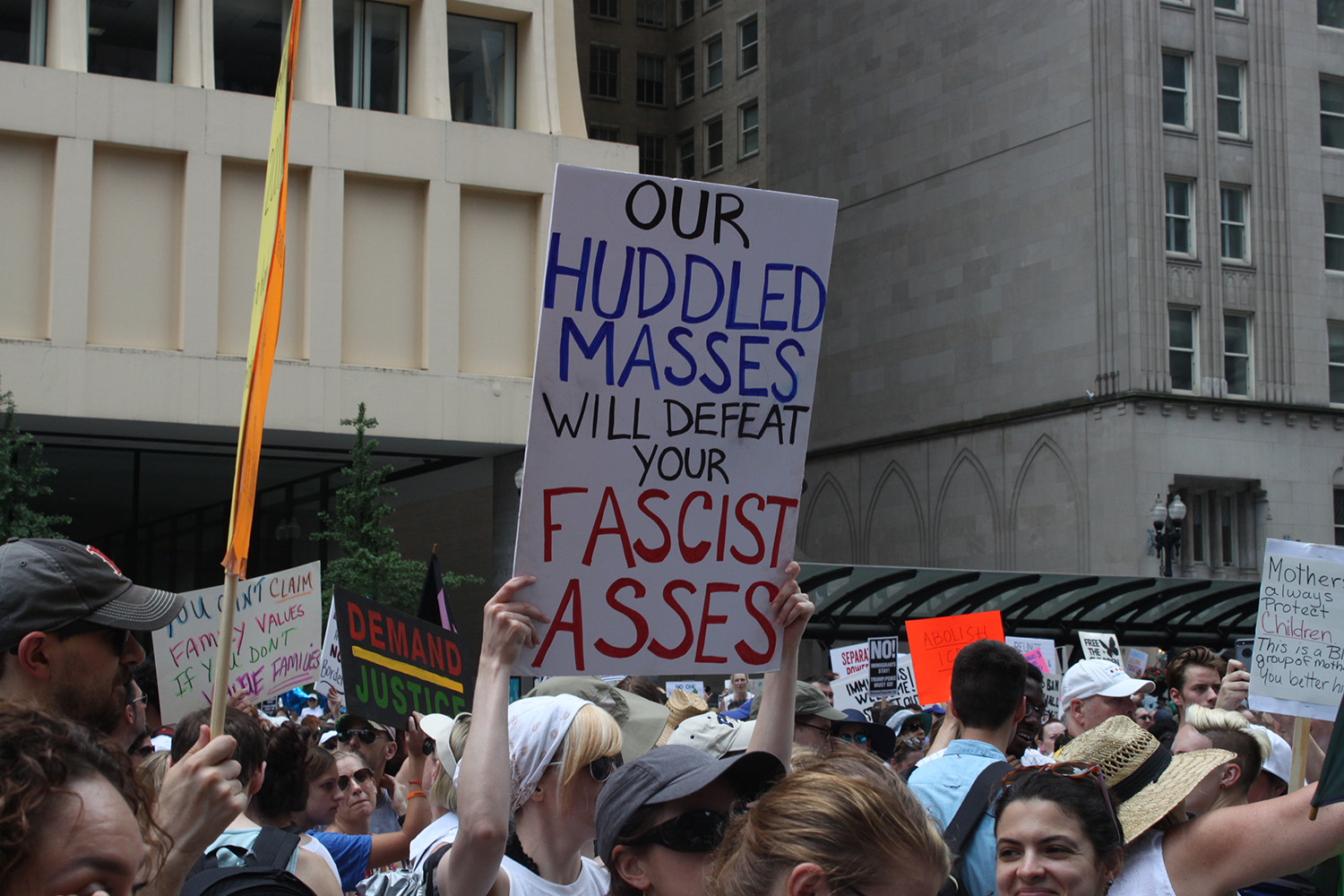 Signs calling the Trump administration “fascist” were ubiquitous at a protest against its immigration policies in Chicago on June 30, 2018. (Will Racke/TheDCNF)

Like previous anti-Trump demonstrations, the immigration march in Chicago was rife with placards, signs and effigies denouncing the administration as a fascist regime.

Comparisons to Nazi Germany were common, with many demonstrators likening Trump’s zero-tolerance policy to the separation of Jewish families who were taken to concentration camps during the Holocaust. One elaborate sign-puppet hybrid caricatured White House senior policy adviser Stephen Miller, who is Jewish, as Nazi propaganda master Joseph Goebbels. 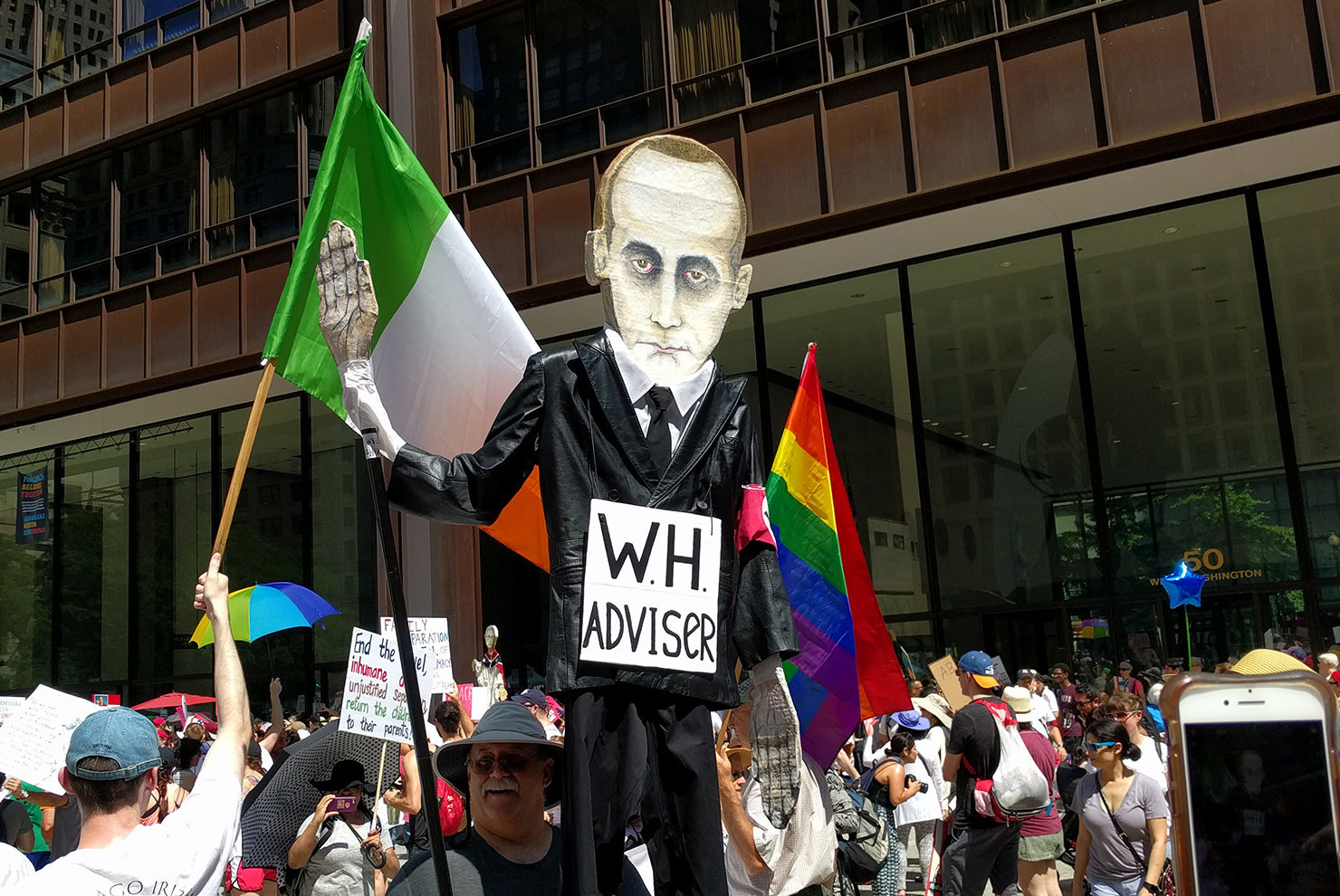 A man holds a sign depicting White House aide Stephen Miller as a Nazi official during a protest in Chicago on June 30, 2018. (Will Racke/TheDCNF)

Nazi references aside, demonstrators more frequently invoked what they saw as American ideals in their criticism of the administration’s immigration agenda. Dozens carried signs bearing images of the Statue of Liberty, which, thanks to Emma Lazarus’s poem “The New Colossus” mounted on its base, has become a symbol of America’s history as a destination for “huddled masses” of immigrants.

Maribel Mejia, center, protests with family members against the Trump administrations immigration agenda in Chicago on June 30, 2018. (Will Racke/TheDCNF)

One demonstrator, 30-year-old Marine Corps veteran Maribel Mejia, said her views on immigration were informed by her service in the military, which is known for integrating people from all walks of life into a unified whole.

“Everybody’s an asset here,” she told TheDCNF, adding that America, like the Marine Corps, can find a “purpose for everybody.”