Former Vice President Joe Biden leads the Democratic field for the 2020 presidential election, according to a CNN poll released Sunday.

Vermont Independent Sen. Bernie Sanders is ranked second on the list with 13 percent — a full 20 points behind Biden. 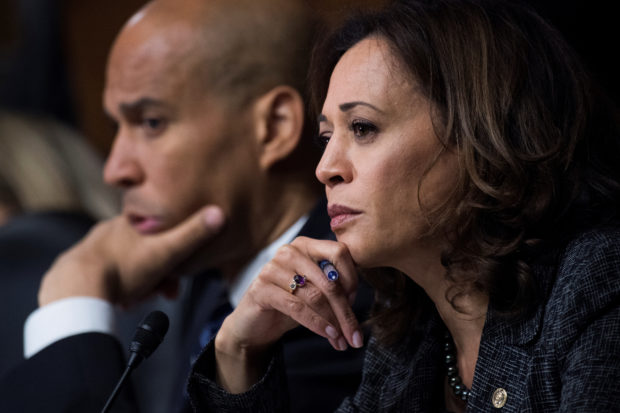 Sen. Cory Booker, D-N.J., and Sen. Kamala Harris, D-Calif., listen as Dr. Christine Blasey Ford testifies during the Senate Judiciary Committee hearing on the nomination of Brett M. Kavanaugh to be an associate justice of the Supreme Court of the United States, focusing on allegations of sexual assault by Kavanaugh against Christine Blasey Ford in the early 1980s, in Washington, DC, U.S., September 27, 2018. Picture taken September 27, 2018. Tom Williams/Pool

OPINION
1
EPSTEIN: It's Time For Some Clear Thinking About The Virus
Opinion
2
'Bulls**t!': CNN's Chris Cuomo Slams Trump Over 'Asinine' Leadership Based On Clip That Omits Half His Comments
Politics
3
After Calling It An 'Editing Mistake,' CBS Goes Right Ahead And Runs The Same Misleading Italian Hospital Footage
Media
4
CBS Will Start Airing Major Movies On Sunday Nights During The Coronavirus Pandemic. Here's What You Can Watch
Editorial
5
Key Figure In Clinton-Lewinsky Scandal Dead
Politics