Just one year into his term, President Donald Trump was the target of a credible assassination plot attributed to ISIS — but the U.S. Secret Service managed to foil the attempt, according to a report that will air on National Geographic channel on Sunday.

According to Anthony Ornato, the Special Agent in Charge of the Presidential Protective Division, chatter led his agents to believe that a credible threat was present on the ground when President Trump was scheduled to touch down in Manila, Philippines, for the ASEAN 50 summit in November 2017.

“There is credible information that an incident could occur during ASEAN,” says Special Agent Gibson, leading the Secret Service’s personnel brief in Manila. Pointing to a map of ISIS and ISIS-affiliated threat actors, she adds, “As of this week, the Philippines has escalated to a critical threat level.” (Days before the president’s visit, ISIS issued a series of threats—via video—that featured a picture of the president filled with bullets, and a message urging jihadists to “lie in wait” and “ambush” POTUS in the Philippines.)

Prior to President Trump’s arrival on Air Force One, a PID agent informs Special Agent Gibson that he’s come across a credible threat against POTUS—in the form of a tweet reading, “Gonna be in Manila the same time as Trump… I’ll take one for the team lads,” accompanied by a mugshot of Lee Harvey Oswald. And on his Instagram, they find a photo of the male suspect wielding a copy of the book How to Kill: The Definitive History of the Assassin. The PID agents then track his IP address and discover that the man is indeed located in downtown Manila, kilometers away from the president’s hotel, and his social media posts reveal that he is traveling in the direction of the president’s hotel. They continue to monitor him.

The situation came to a head when, 20 minutes prior to Air Force One touching down in Manila, Secret Service still did not have the suspect’s exact location. Chad Ragan, the Secret Service agent in charge for the trip, demanded answers. “I need an update, NOW!” he said. 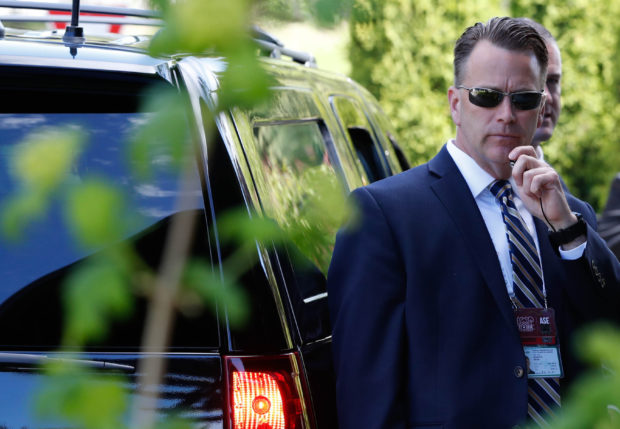 A Secret Service Agent works as U.S. President Donald Trump departs in his vehicle from the G7 summit in the Charlevoix city of La Malbaie, Quebec, Canada, June 9, 2018. REUTERS/Yves Herman

Within minutes, the suspect was tracked to Luneta Park — just a mile from the hotel where President Trump was scheduled to stay — where he was meeting with someone. With the help of the Philippine National Police (FNP), Secret Service agents swept the park and apprehended the suspect. (RELATED: Trump: Five Most Wanted ISIS Leaders Captured)

Special agent Ragan attributes much of the Secret Service’s success to technology, saying, “We were able to know that he was moving close to us, where he was, and track him. That was a huge piece of stopping the threat.”

But Ragan also noted that their job would be much more difficult without all the help they get from local law enforcement everywhere they go. “That’s an essential key to it that can’t be understated, is how great these foreign governments are, or even locals,” he explained. “If we go to Topeka, Kansas, the local law enforcement is such a help. We get so much support from the host committee, or the host country.”