Hillary Clinton said Sunday that husband Bill Clinton did not need to resign over his affair with intern Monica Lewinsky — “who was an adult.”

Clinton told CBS’s “Sunday Morning” that then-President Clinton did the right thing by staying in power, and the investigation into the Lewinsky affair “came out in the right place.” (RELATED:Hillary Clinton Says Husband’s Sexual Harassment Allegations ‘Different’ Than Trump)

Clinton was asked point blank if whether “in retrospect, do you think Bill should’ve resigned in the wake of the Monica Lewinsky scandal?”

Asked if she thought the affair was “an abuse of power,” Clinton said, “No. No.” 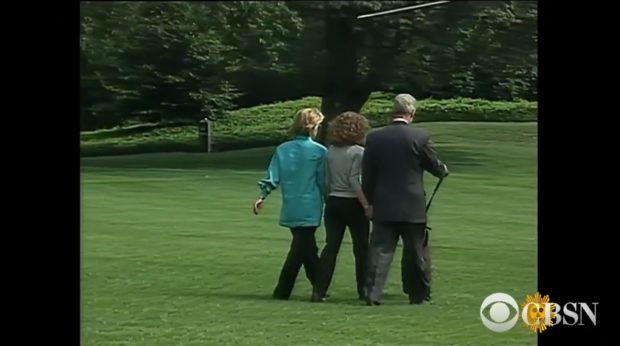 That response is not in sync with some Democratic female legislators who feel Bill Clinton definitely crossed a line and would not be excused in the age of the #MeToo movement. Clinton friend Sen. Kirsten Gillibrand has said that she believes Clinton should have resigned.

Clinton was asked “what roll if any” she played “in criticizing the character of the women who accused Bill of sexual misconduct.” She replied, “None.” But that answer flies in the face of reports that Clinton actively worked against those women. Clinton accuser Kathleen Willey told The Daily Caller “Believe me, [Hillary] is the one behind all of the terrorization, and the trashing of all of us who have suffered at his hands. She’s behind it all. She’s hired the private investigators, she’s done it all.”

When asked if she would agree with the statement, “A president of the United States cannot have a consensual relationship with an intern; the power in balance is too great,” Clinton chose to ignore the question and stated that the intern in question “was an adult.”

She then turned the tables on President Donald Trump.

“But let me ask you this: Where’s the investigation of the current incumbent [president], against whom numerous allegations have been made, and which he dismisses, denies, and ridicules?” (RELATED: Former Senior Advisor To The Clintons Tells Bill And Hillary To Step Out Of The Limelight And Give Speaking Fees To Charity)

“So, there was an investigation [of President Clinton], and it, as I believe, came out in the right place.”