It’s an established fact that Sinema, a former Green Party activist who co-founded an anti-war group, wore a pink tutu at one of the multiple anti-war protests she attended in 2003.

“While we were in harm’s way, she was protesting our troops in a pink tutu,” Republican candidate Martha McSally, a former Air Force fighter pilot, said during Monday night’s debate.

PolitiFact dinged McSally for that comment in its live fact-check of the debate on Twitter: “We looked into that claim and rated it Mostly False.” 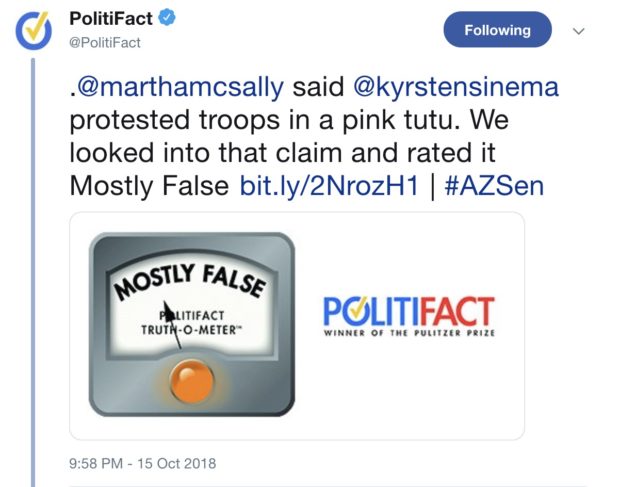 But the fact-checker got it wrong.

The Sept. 10 article PolitiFact tweeted Monday night evaluated a different claim than what McSally said during the debate.

That article reviewed a McSally campaign ad and examined the question: “Did Arizona’s Kyrsten Sinema protest troops in a pink tutu and denigrated [sic] their service?”

The “mostly false” ruling hinged on whether Sinema’s tutu-wearing activism amounted to “denigrating” the troops, as McSally charged in the Aug. 23 ad. But McSally on Monday night didn’t accuse Sinema of “denigrating” the troops, only saying that Sinema was “protesting our troops in a pink tutu” while McSally was serving her country in the military.

Sinema did indeed wear a pink tutu at one of the protests she attended against American military involvement in the Middle East.

A 2003 Arizona State University news article at the time described Sinema wearing “something resembling a pink tutu” at one of the protests.

McSally’s campaign included a photo of Sinema in a pink tutu in its campaign ad and PolitiFact’s own Sept. 10 article noted that Sinema wore the pink tutu for at least one protest.

Except you said this in your explanation: “Sinema was a law student at the time who participated in a series of vigils and anti-war protests in Arizona. In at least one of those instances, she wore what looks like a pink tutu.” https://t.co/IJeETCCc8W

An ABC News affiliate in Phoenix found the ad that PolitiFact ruled “mostly false” was largely true. ABC15 found the ad did “interject McSally’s opinion but the basic facts are true.”

Instead of focusing on the definition of “denigrating,” ABC15’s fact-check focused on the core facts of the claim: while McSally was serving in America’s military, Sinema was an anti-war activist who donned a pink tutu.

Sinema openly associated with fringe elements of the far-left during her anti-war activism. (RELATED: Skeletons In Sinema’s Closet Come Back To Haunt Her As Senate Race Tightens Up)

She promoted an appearance by Lynne Stewart, a lawyer who was convicted of aiding an Islamic terrorist organization, in 2003.

Sinema also reportedly partnered with anarchists and witches in her anti-war activism and said she did “not care” if Americans wanted to join the Taliban.

A spokeswoman for Sinema later claimed the 2003 comments were “clearly offhand and an effort to get back on the topic of why she opposed the war.”

PolitiFact declined to change its “mostly false” rating for the ad after CNN reported on the anti-war flyers because “the flyer is not evidence that Sinema denigrated troops herself,” the website explained in an editor’s note.

“I don’t have anything else to add that’s not already published in our fact-checks,” PolitiFact editor Angie Drobnic Holan told The Daily Caller News Foundation in an email.