The Archdiocese of Washington, to foster “transparency and accountability,” released a list Monday of 31 clergy members “credibly accused” of sexually abusing minors since 1948.

Cardinal Donald Wuerl, whose resignation as archbishop of Washington was accepted Friday amid mounting furor over his alleged complicity in sexual abuse cover-ups, released the list in an effort to help the archdiocese heal from wounds of abuse and distrust. Of the clergy members named, none are still active in ministry, 28 were archdiocesan priests, three were priests of independent religious orders, 13 were never arrested and 14 are still alive, according to The Washington Post. (RELATED: Pope Authorizes Investigation Of Vatican Archives Concerning McCarrick Scandal) 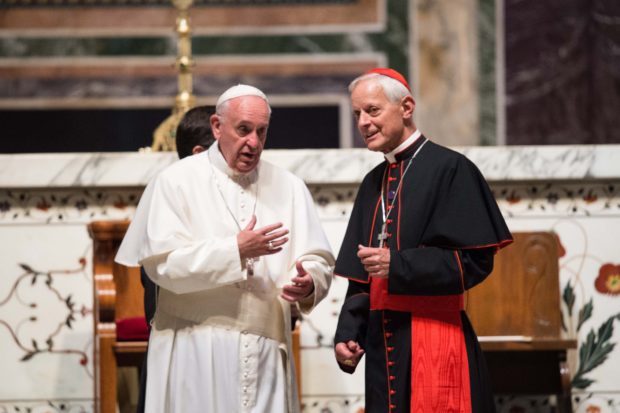 Pope Francis (L) speaks with the Archbishop of Washington Cardinal Donald Wuerl at the end of a midday prayer with US bishops at the Cathedral of St. Matthew the Apostle in Washington, D.C., on September 23, 2015. (NICHOLAS KAMM/AFP/Getty Images)

Former cardinal Theodore McCarrick was not included on the list because he was not a priest of the archdiocese when he allegedly committed acts of abuse.

Wuerl called the list’s release “a necessary step toward full transparency and accountability and the process of healing,” but also noted that “there has not been an incident of abuse of a minor by a priest of the archdiocese in almost two decades,” according to WaPo.

Ed McFadden, spokesman for the archdiocese, said six of those named on the list had not been made public before. McFadden also said the list had been ready for publication “within the past week” per Wuerl’s previous authorization of a total audit for the archdiocese. The spokesman clarified that more lists and information would be released in the coming months, including the names of clergy members accused of sexual abuse without substantial evidence and the names of clergy accused of other things.

“We are fully examining everything,” McFadden said.

The Survivors Network of Those Abused by Priests (SNAP) dismissed the release of the list as a “hastily assembled PR stunt,” asserting that the list was incomplete and questioning the archdiocese’s criteria for “credibly accused.”

“We call on the Archdiocese to immediately release the names of every priest, whether living or dead, religious order or diocesan, along with accused seminarians, bishops, nuns, brothers and lay employees,” SNAP said.

The organization also cast suspicion on the timing of the list’s release in light of Wuerl’s recent resignation.

“It cannot be overlooked that this announcement comes immediately on the heels of the resignation of Cardinal Donald Wuerl, almost as if the announcement were meant to distract from the fact that the Archdiocese’s leader had just resigned his position due to his role in sexual abuse cover-ups,” SNAP said.