Republican Rep. Martha McSally explained on Wednesday night’s “Hannity” why she requested an apology from her challenger for saying she didn’t care if Americans joined the Taliban.

Her Democratic challenger, Kyrsten Sinema, said she didn’t care if Americans joined the Taliban during a radio interview back in 2003.

McSally demanded Sinema apologize to veterans and herself during their debate on Monday night.

“Martha, you were serving after 9/11, correct?” Hannity asked.

“Yes, I was Sean. I was actually deployed on 9/11 and was part of the team to ramp up for the initial air campaign in Afghanistan and later I commanded an A-10 squadron getting shot at by the Taliban in Afghanistan and making sure that we were taking them out as they were trying to kill our troops, this is personal,” McSally stated. (RELATED: Sinema Caught Again: ‘Arizona Is The Meth-Lab Of Democracy’)

“Maybe it’s okay, you can call Arizonans crazy and the meth capital and all of that but it gets serious. It’s okay to join the Taliban? Seriously? She said that. How was that a smear if you are just asking for an apology for what she did and said?” Hannity asked.

“I simply asked for an apology. She could have said I didn’t mean it, I don’t know what I was thinking, but when you as an American are saying it’s okay for Americans to go fight for the Taliban against our troops,” she added. (RELATED: Kyrsten Sinema’s Anti-War Group Portrayed American Soldiers As Skeletons) 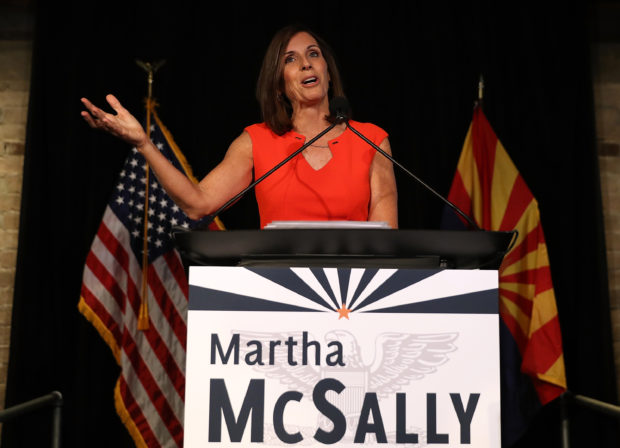 McSally continued, “When we were over in Afghanistan we would — we would line up on the taxiway and we would have American troops who perished in the line of duty with the flag draping their coffin, coming by as they were loaded onto the cargo planes and we would all line up silently and salute them, because they paid the ultimate sacrifice and were killed, killed by the Taliban and their allies and somehow she thinks this is either funny or is not important.”