White liberals are positioning themselves more to the left on certain racial issues than the average black voter, according to a New York Times column published Thursday.

In the column, titled “The Democrats’ Left Turn Is Not an Illusion,” New York Times columnist Thomas Edsall makes the case that, while Democrats as a whole are increasingly moving left, that move is primarily driven by “well-educated whites, especially white women.” 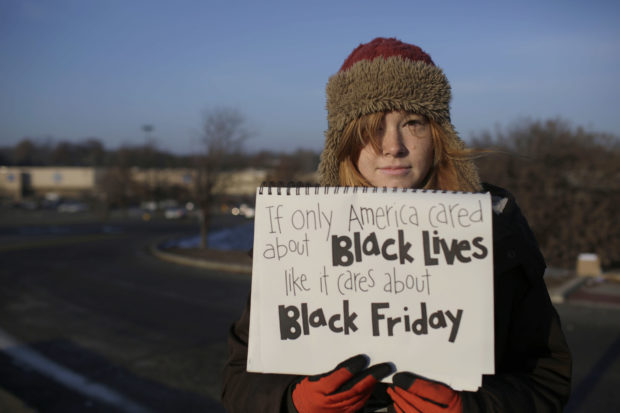 FERGUSON, MO – NOVEMBER 28 : A demonstrator protesting the shooting death of Michael Brown holds a sign near the entrance to a local Walmart store on Black Friday, November 28, 2014 in Ferguson, Missouri. Some local businesses remain closed to consumers in Ferguson as tensions remain high in the community after Michael Brown, an 18-year-old black male teenager, was fatally wounded by Darren Wilson, a white Ferguson Police officer, on August 9, 2014. A St. Louis County 12-member grand jury decided Monday not to indict Wilson with charges, sparking riots throughout Ferguson. (Photo by Joshua Lott/Getty Images)

Edsall cites Pew survey data from 2017 to show that white liberals are further left than even the black electorate – which has comprised a nearly monolithic voting bloc for Democrats for decades – on key issues like affirmative action and discrimination. (RELATED: President Trump Blasts ‘Radical Democrats’ Who ‘Have Turned Into An Angry Mob’)

White liberals, Edsall writes, make up “40 percent of all Democratic voters,” and are “well to the left of the black electorate on some racial issues.” 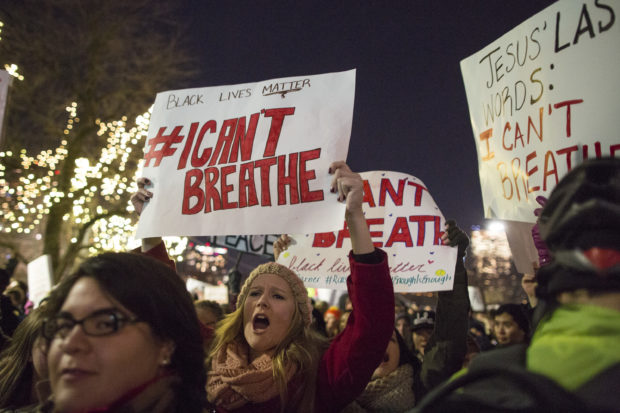 BOSTON, MA – DECEMBER 4: Protesters march while chanting and holding signs during a protest against the decision by a Staten Island grand jury not to indict a police officer who used a chokehold in the death of Eric Garner in July, on December 4, 2014 in Boston, Massachusetts. The grand jury declined to indict New York City Police Officer Daniel Pantaleo in Garner’s death. (Photo by Scott Eisen/Getty Images)

The column describes Gallup Poll data that shows 50 percent of Democratic voters self-identify as liberal, compared to 30 percent in 2001. Further, moderates have gone from 44 percent to 35 percent and conservative Democrats are an endangered species at 13 percent, compared to 25 percent at the turn of the century.

“White liberals are to the left of black Democrats, placing a much stronger emphasis than African-Americans on the role of discrimination and much less emphasis on the importance of individual effort,” Edsall opines.

Among white liberals, according to Pew survey data collected in 2017, 79.2 percent agreed that “racial discrimination is the main reason why many black people can’t get ahead these days.” 18.8 percent agreed that “blacks who can’t get ahead in this country are mostly responsible for their own condition,” a 60.4 point difference, according to a detailed analysis of the Pew data provided the Times by Zach Goldberg, a doctoral candidate in political science at Georgia State University.

Among blacks, 59.9 percent identified discrimination as the main deterrent to upward mobility for African-Americans, and 32.0 percent said blacks were responsible for their condition — in other words, blacks are more conservative than white liberals on this issue.”

Interestingly, the New York Times columnist cites a study that shows “progressive activists” are more likely than the average American to 1.) say they never pray – 50 percent to 19 percent 2.) be ashamed of being American – 69 percent to 24 percent and 3.) be white – 80 percent to 69 percent.