A company owned and run by South Carolina’s Democratic candidate for governor was blacklisted as a contractor for the Department of Veterans Affairs following allegations that he was selling his veteran status to corporations so they could tap into federal contracting dollars intended to help disabled vets.

James Smith works as a state legislator and lawyer, and also runs the Congaree Group, which has received millions of dollars in federal government contracts. The company operates out of Smith’s law firm suite, and he once told the VA he was its only employee.

On paper, the company has done everything from manufacturing pharmaceuticals to mopping floors and from parking cars to conducting advanced mathematical analysis.

On May 17, VA officials arrived for a surprise inspection, VA deputy assistant Secretary James Hutton told The Daily Caller News Foundation. The purpose was to find out if Smith was running a middleman company used to win lucrative federal contracts earmarked for disabled veterans, then passing all the work off to non-veteran companies in exchange for a cut for himself. Such so-called rent-a-vet scams are forbidden.

Smith’s company declined to cooperate with the VA and failed to provide evidence that the business was legitimate, Hutton said. On May 31, the VA’s Center for Verification and Evaluation issued a “Notice of Proposed Cancellation,” which would lead to the Congaree Group being stripped of its preferred, disabled-veteran contractor status if not resolved, according to Hutton. The Congaree Group still “did not provide the requested documents” explaining itself, he said.

On July 11, one month after Smith won the primary election, the VA banned the company from its preferential status, according to Hutton. The Congaree Group no longer appears on the VA’s list of approved veteran-owned businesses. 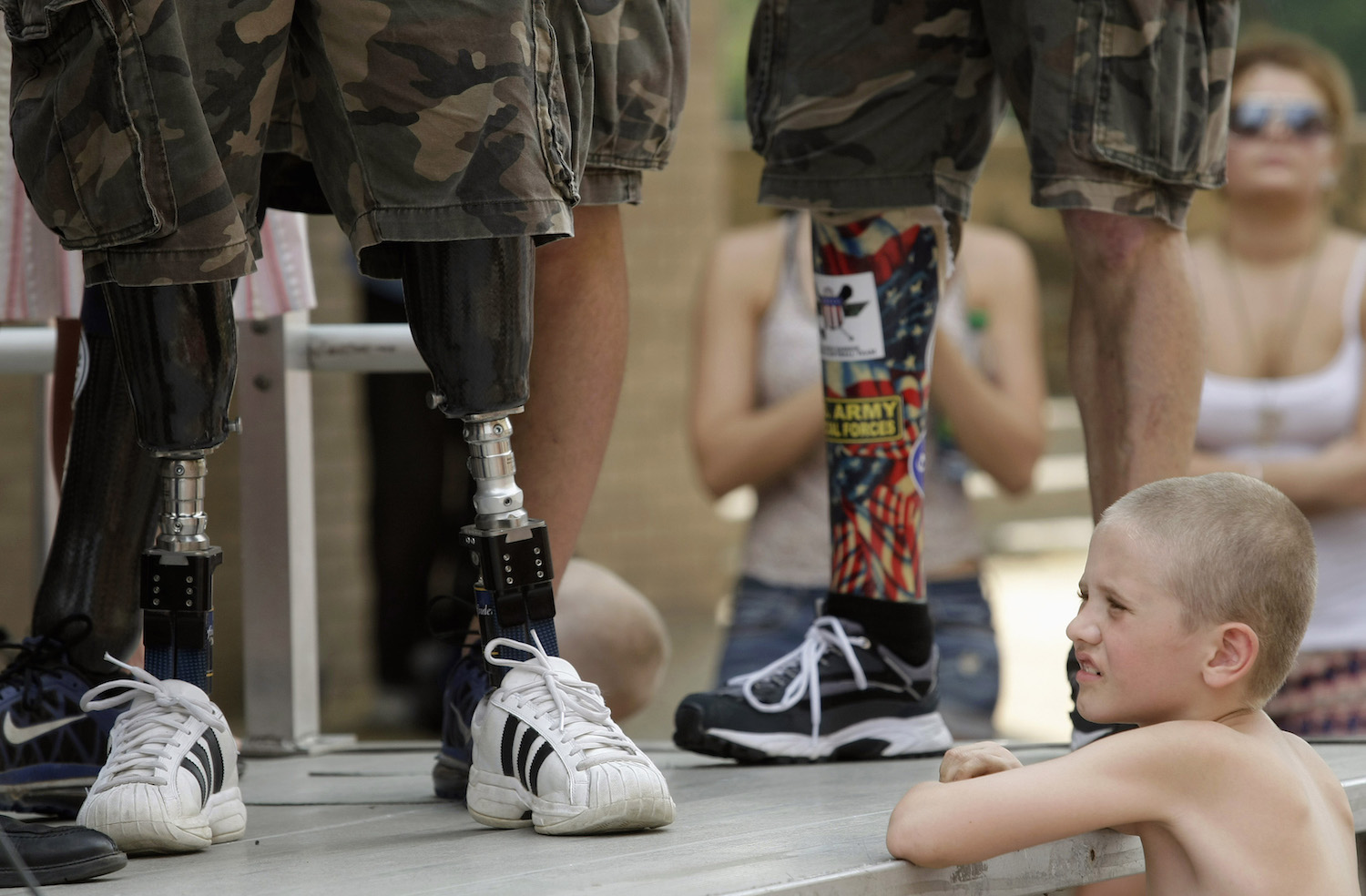 A child looks at the prosthetic legs of Wounded Warrior Amputee. REUTERS/Gary Cameron/Files

A 2013 VA audit concluded that “it appears that [Smith] uses his [disabled veteran] status to secure VA set-aside contracts and pass the performance of such contracts to various non-Veteran entities. Such conduct is prohibited.” (RELATED: Dem Candidate May Have Used Veteran Status To ‘Broker’ Set-Aside Federal Contracts For Non-Vets)

Smith “does not have the specialty skills required to perform on several of the contracts he has secured,” the audit said, noting that the Congaree Group holds contracts across a variety of industries worth over $1 million. “It is reasonable to conclude that the Congaree Group functions as a middleman to enable various non-Veteran entities like BDI Pharma to secure the actual contract” in violation of rules.

“As a result, the Congaree Group is ineligible for the SDVOSB program,” the audit ruled, referring to the program that reserves a portion of VA contracts for veteran-owned businesses.

The company was banned after that 2013 audit, but Smith appealed and the VA re-instated it.

Smith is running for governor relying heavily on his war record. Eight out of the 11 paragraphs in his campaign biography relate to his family’s military service dating back to the Revolutionary War. It mentions that he is a “small business owner” on top of being a lawyer, without saying what line of work he is in.

Smith’s multi-million dollar business has rarely been mentioned in the local media. His spokesman, Brad Warthen, declined to say a single word about the Congaree Group to TheDCNF and would not discuss the VA’s removal of it from the agency’s program.

On the Congaree Group’s website, Smith has said that if a large, non-veteran owned corporation wants a government contract, it can partner with his company. He’ll win the contract by relying on his disabled-veteran status and government connections and the non-veteran company will do the work.

The site advertised opportunities for “strategic alliances” to help meet “government mandates” that set aside contracts for disabled veterans, as the 2013 audit noted. The Congaree Group said it would “broker” contracts for “synergistic partners.”

“The Congaree Group, Congaree Pharma, has the ability through our Service Disabled Veteran Owned Small Business (SDVOSB) designation to broker the government contracts that will ensure your company’s future stronghold in the marketplace,” the website said.

The Congaree Group’s website used language that showed it wasn’t involved in the order fulfillment processes: “You can order these products from Congaree Pharma … but the product is drop-shipped from BDI Pharma’s warehouse directly to you.”

That language has since been scrubbed.

As recently as March 2018, the VA said it intended to award the company a valet-parking contract at the Augusta, Georgia, hospital.

TheDCNF became aware of the issue in the course of its reporting on the VA. A disabled veteran who spent years specializing in automobile services complained that he was not able to get work at the VA because non-veterans had taken it and pointed to Congaree.

The Charleston, South Carolina, VA’s public affairs office said its parking services were offered by a joint venture between “The Congaree Group and Ambassadors Plus,” TheDCNF reported on May 10. A detailed profile of the operation put out by hospital public affairs staff made no mention of Smith and said the valet services were run by Ambassador’s Alex Latsko.

In an interview for TheDCNF’s May story, Smith’s then-spokeswoman Alyssa Miller was evasive about the company’s basic operations, such as how many people worked there.

Until 2014, Smith also ran another company, HM Congaree LLC, that sold massive Case Construction equipment to other government agencies all around the country. Its website acknowledges that it merely fulfilled orders through Case’s existing network of local dealers.

“HM Congaree can help federal government agencies meet requirements under Executive Order 13360, which mandates that 3% of all federal agencies’ contracting dollars go to businesses owned by service-disabled veterans,” it said.

Smith’s staff declined to say what would become of the Congaree Group if he is elected governor or what value he added for customers receiving these goods and products.

Congaree Group has made $7 million since 2010, and HM Congaree made an additional $650,000, according to contracting records.