President Donald Trump took a shot at Hillary Clinton, asking the people in attendance at his Texas rally which president had appointed the highest percentage of judges on Monday night.

Trump was in Texas rallying on behalf of Senator Ted Cruz. Cruz is facing a Democratic challenger in November, Rep. Beto O’Rourke. They were previously close in the polls, but Cruz has since pulled away from O’Rourke.

“I’ve been there less than two years and I already have two of them cause we also have a fantastic new justice in Neil Gorsuch. We had him just approved, he was just confirmed and we have a record number of circuit court judges for the time that we’ve been in office,” Trump said. “And that we fully expect to go to the all-time record. Percentage-wise it’s right up there and we’ve only been here a short — okay ready, here’s a question: Percentage-wise, who has more justices, federal judges appointed percentage wise than any other president? Who is it?”

“Who appointed the highest percentage of judges?” he asked. 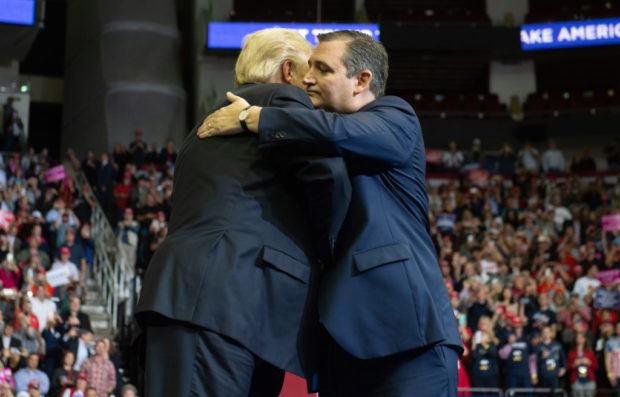 US President Donald Trump greets US Senator Ted Cruz (R), Republican of Texas, during a campaign rally at the Toyota Center in Houston, Texas, on October 22, 2018. (Photo by SAUL LOEB / AFP / Getty Images)