A Democratic candidate for the West Virginia House of Delegates was an active leader in pagan witchcraft, The Daily Caller News Foundation has learned.

Lissa Lucas rose through the ranks of a Wiccan cult to its third level — the highest stage for most Wiccan cults — and instructed lower-level Wiccans in occult practices, TheDCNF’s investigation found.

Lucas’s campaign has raised more than five times as much money as her Republican opponent, thanks in part to national media attention that has left out Lucas’s witchcraft.

The author biography for Lucas’s 2007 book, “The Art of Magic Words,” a how-to guide for casting spells, touted her experience in witchcraft.

“Llysse Smith Wylle has been Pagan for many years and Wiccan for seven,” the description reads. “She is a member of the Third Circle of the Tradition of Universal Eclectic Wicca; she also teaches and coordinates its First Circle degree via the Coven of the Far Flung Net.”

“For a number of years, she has studied Chaos and other magical techniques privately, as well as with a small esoteric study society called the Order of the Golden Breath,” the description continues. 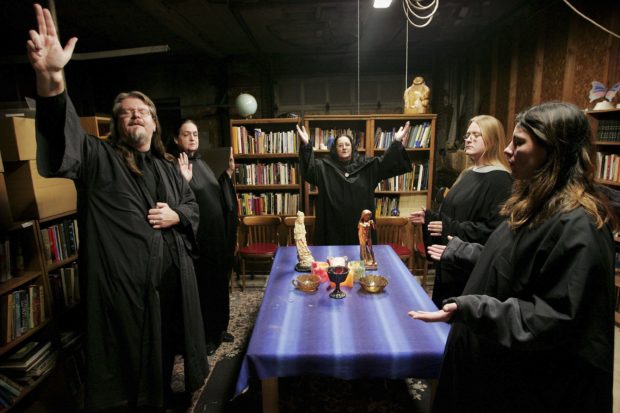 In her book, Lucas cautioned against using pagan spells for harm without a good reason, writing that “actions that do cause harm should be done with the appropriate respect and restraint.”

“Casting a beauty spell on yourself, for example, will usually be seen as a spell that causes no harm,” she explained. “Casting a spell to exact revenge on someone you don’t care for, on the other hand, is generally unacceptable to Wiccans.”

“However, the advisability of casting a spell for a hunting excursion should show the proper respect for the environment,” she wrote. “Just what the ‘proper respect’ should be is a matter of conscience.”

The book’s inside cover shows it was published by Ground Mark Press in Cairo, West Virginia  — the town where Lucas lives and where her campaign is based. The author described living in a secluded West Virginia home with her husband.

Lucas’s campaign biography includes personal details like why she and her husband chose to live in a rundown house on a 45-acre farm — “the beautiful, secluded location” — but it does not include any mention of her occult practices.

Lucas co-authored a second book on Wiccans, this time an academic textbook. “Wicca 334: Further Advanced Topics in Wiccan Belief” came out in January 2008.

Lucas previously went by Llysse Wylle — the name she used in writing the pagan books — on both her Facebook and Twitter accounts.

She later changed her listed name on Facebook and Twitter to her legal name, but her handles for both still retain her pagan pen name.

Her campaign Twitter account, for example, is titled “Lissa for WV House” but still uses the handle “@LlysseWylle.”

“I think what really bugs me about my opponent’s attacks on my spirituality is that for that kind of attack to be an effective political strategy, he has to have presumed that the people of this district are religious bigots, and they’re just not,” Lucas wrote in an email to TheDCNF.

“I don’t like that he views them that way. They’re good, kind, hard-working people who love their neighbors. In small towns and rural areas we love and stand up for each other, period,” she added. (RELATED: Liberal Male Billionaire Is Sole Funding Source For Anti-Trump ‘Republican Women’ PAC)

She did not return a follow-up email asking whether she remains an active Wiccan.

Lucas went viral in February when she was removed from the state House for violating procedural rules by using public testimony about a bill to attack individual lawmakers for campaign donations from the oil and gas industry.

She received coverage from outlets including The New York Times, The Washington Post and HuffPost. The Young Turks, a left-wing outlet, called her “an American hero.”

Lucas’s campaign pulled in roughly $90,000 in donations — more than five times what her Republican opponent has raised — following the national media attention.

Left out of that media coverage was Lucas’s years spent practicing pagan witchcraft and instructing others in the practice.