Democratic gubernatorial candidate Stacey Abrams said on Tuesday’s “The View” that she would support a ban on the AR-15 — but she changed the subject when asked whether she would also support confiscation of AR-15s already in circulation in her home state of Georgia.

Abrams, who is hoping to become the first black governor of Georgia, appeared on “The View” to discuss her campaign — and host Meghan McCain pressed her on her views regarding the Second Amendment.

You have been endorsed by Everytown, an anti-gun organization. Michael Bloomberg’s anti-gun group as well. You say you’re proud to have an ‘F’ rating from the NRA, and Michael Bloomberg and others like him, in the wake of what happened in Pittsburgh, support taking the AR-15, which is the most popular rifle in America, away from people. Do you, like Everytown, support banning the AR-15?

Abrams responded by saying first that she was not anti-gun, noting that her grandmother had taught her how to shoot as a young girl in Alabama.

She voiced support for background checks and waiting periods and argued that people who had been charged with domestic violence should not have access to firearms. (RELATED: Democrat Candidate Refuses To Reveal Source Of Million Dollar Donations) 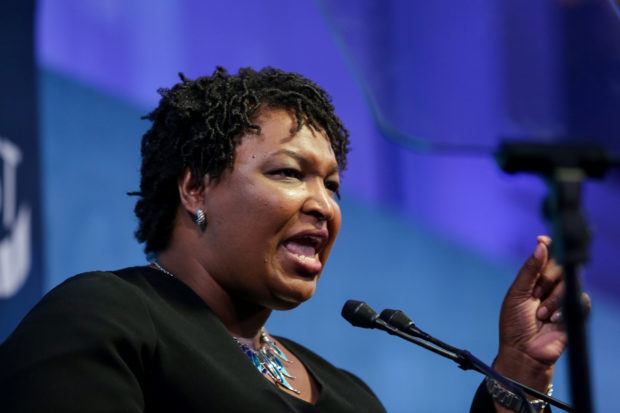 Stacey Abrams, Candidate for Governor in the state of Georgia, delivers a speech during a fundraiser in Manhattan, New York, U.S. September 24, 2018. REUTERS/Amr Alfiky

I do not believe like weapons of mass destruction like the AR-15 belong in civilian hands. I think it should be prohibited from civilian use. I have shot an AR-15, and I think you probably have too, and while it’s an amazing amount of power, it also is an amazing amount of destruction, and there is very little that can be done to protect vulnerable communities when the AR-15 is present.

McCain pressed harder, asking if that meant confiscation would come next. ” I do appreciate your honesty,” she began, “And I assume by banning it, you would be rounding them up. It’s the most popular gun in America, around 61% of all U.S. civilian rifle sales. Would you be rounding them up from civilians in Georgia that own it?”

Abrams skipped over the question of confiscation and instead called for a ban on “assault weapons.”