The tense relationship between CNN’s Jim Acosta and President Donald Trump reached a new level Wednesday in the president’s news conference after the 2018 midterms.

The often combative Acosta refused to give up the microphone after asking the president multiple questions and being told to sit down. A female White House staffer even attempted to pry the microphone away from Acosta, but he held onto it. The action drew Trump’s ire and the president went on a tirade about CNN and Acosta.

Acosta initially asked to “challenge” Trump on “the statements that you made at the tail end of the campaign in the midterms.”

Acosta asked about Trump calling the migrant caravan an “invasion.”

Trump said, “I consider it to be an invasion.”

Acosta rebutted, “As you know, Mr. President, the caravan was not an invasion. It’s a group of migrants moving up from Central America towards the border with the U.S. … Why did you characterize that as such?”

“Because I consider it an invasion. You and I have a difference of opinion,” Trump said calmly.

“Do you think you demonized immigrants?” Acosta replied. 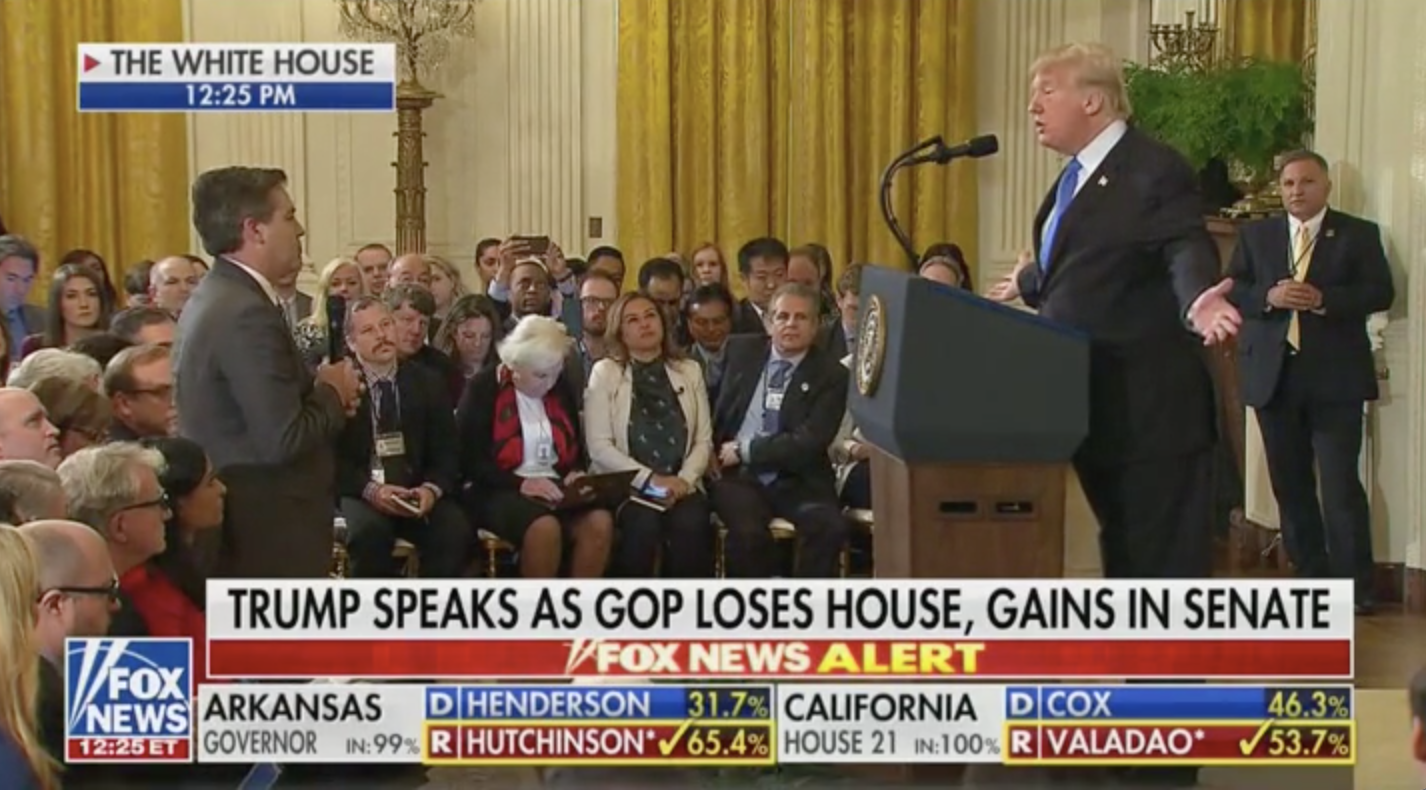 At that point, Acosta interrupted again and Trump cut him off. “Wait, wait. You know why we need the people? Because we have hundreds of companies moving in. We need to people.”

Acosta then challenged an ad the Trump campaign released featuring migrants climbing over gates and walls. “They were not actors,” Trump said, “They didn’t come from Hollywood.”

Acosta shot back again, “They are hundreds of miles away. That is not an invasion.”

Trump, showing frustration, raised his tone at Acosta, “Honestly I think that you should let me run the country. You run CNN. And if you did it well, your ratings would be much higher.”

Acosta asked for another question but Trump said, “That’s enough.”

At that point, a White House staffer attempted to grab the microphone, but Acosta held onto the mic and would not let her take it from him.

The staffer eventually relented as Acosta yelled about the Russia investigation.

“I am not concerned about anything with the Russian investigation, because it is a hoax. That’s enough. Put down the mic,” Trump said as Acosta kept shouting.

“I tell you what, CNN should be ashamed of itself having you working for them. You are a rude, terrible person,” Trump said frustrated, “You shouldn’t be working for CNN. You are a very rude person. The way that you treat Sarah Huckabee is horrible. And the way that you treat other people are horrible. You shouldn’t treat people that way.” (RELATED: ‘Trump Sends First Message Victorious Dems Wanting Investigations: ‘Two Can Play That Game!’)

White House reporter Peter Alexander eventually got the mic and came to Acosta’s defense. Trump said, “I’m not a big fan of yours, either, to be honest.” Acosta kept shouting through all of this until Trump shut him down saying, “Just sit down, please. When you report fake news, which CNN does a lot, you are the enemy of the people.”