Smash Racism DC, the mob group that assembled outside of Tucker Carlson’s home Wednesday evening, is responsible for other incidents of harassment and violence.

Carlson, co-founder of The Daily Caller and the host of “Tucker Carlson Tonight,” was at the Fox News studio when the mob showed up at his Washington, D.C., home. (RELATED: A Mob Showed Up Outside Tucker Carlson’s House And Ordered Him To ‘Leave Him’)

Smash Racism DC posted videos of their members chanting “racist scumbag, leave town!” and “Tucker Carlson, we will fight! We know where you sleep at night!” outside of his home. The mob also posted Carlson’s address on their Twitter account.

Carlson told The Washington Post that his wife was home alone at the time and heard the mob trying to break down the front door. Mrs. Carlson hid in the pantry and called 911.

Smash Racism DC has a history of orchestrating threatening events and even violent protests against their political opponents.

In September, the group was responsible for harassing Republican Texas Sen. Ted Cruz at a D.C. restaurant and shouting at him and his wife, Heidi. Cruz and his wife were forced to leave the restaurant temporarily until the protesters, who were upset with Cruz’s support of Supreme Court nominee Brett Kavanaugh, left.

The group sent a threatening message to Cruz after the incident, writing on Twitter: “This is a message to Ted Cruz, Bret Kavanaugh, Donald Trump and the rest of the racist, sexist, transphobic, and homophobic right-wing scum: You are not safe. We will find you. We will expose you. We will take from you the peace you have taken from so many others.” 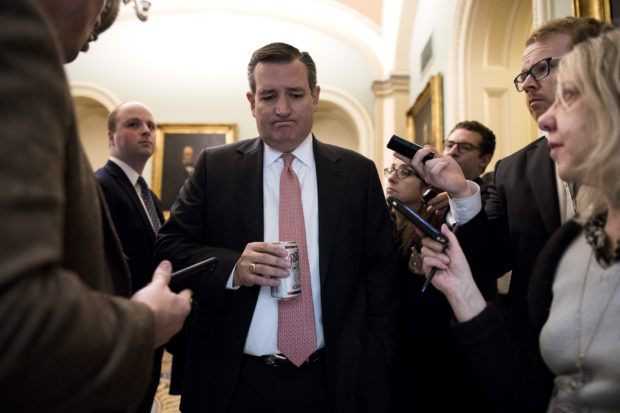 WASHINGTON, DC – JANUARY 19: Sen. Ted Cruz (R-TX) speaks with reporters at the U.S. Capitol January 19, 2018 in Washington, DC. A continuing resolution to fund the government has passed the House of Representatives but faces a stiff challenge in the Senate. (Photo by Aaron P. Bernstein/Getty Images)

An undercover video released by Project Veritas shows Mike Isaacson, co-founder of Smash Racism DC, revealing that they have a plan for “how to shut down a metro.”

The same video shows an activist with #DisruptJ20 describing how they can stop metro trains using chains. The #J20 activist also said their group planned to blockade major parts of the city to shut down the inauguration.

After the Philadelphia Eagles NFC Championship win, Isaacson urged rioters to “burn down a police station for me.”

“Burn a police station for me, Philly,” Isaacson said before asking “is Tom Brady still a Trump supporter?”

Isaacson said in another tweet that “Dead cops are good.”

In July, the group organized outside of White House Policy Adviser Stephen Miller’s alleged residence, where protesters engaged in similar tactics as the ones used at Carlson’s home.

“Stephen Miller! We will fight! We know where you sleep at night!” the mob wrote on Facebook.