It’s Cupcake Week in college football, which means many teams will be looking to give their injured players some rest before rivalry week.

But don’t tell that to Nick Saban. If you thought banged-up Alabama players like star quarterback Tua Tagovailoa were going to get a rest against The Citadel, you thought wrong. (RELATED: SEC Week 11 Review: Tide, Dawgs Keep Rolling)

Asked if he would consider “resting” Tagovailoa vs. The Citadel, Saban replied “No. Why would we do that?”

While it almost never makes sense to question Nick Saban, the decision to play Tagovailoa this week is a puzzling one. Tua has been dealing with a knee injury since the Crimson Tide’s Week 7 game against Missouri. Since then, Tagovailoa has been forced to wear a knee brace, and last week he got so banged up that he couldn’t finish Saturday’s game against Mississippi State. 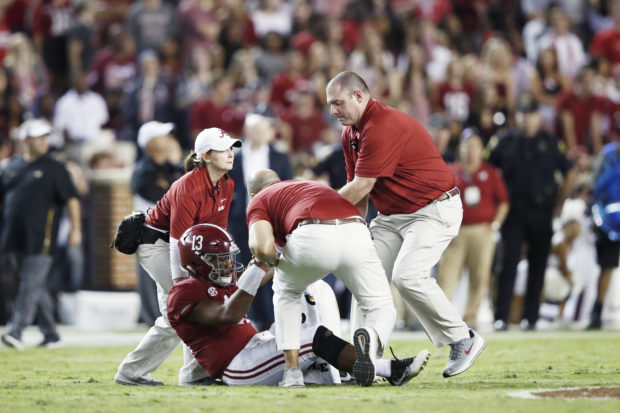 TUSCALOOSA, AL – OCTOBER 13: Tua Tagovailoa #13 of the Alabama Crimson Tide is looked at after suffering an injury in the third quarter of the game against the Missouri Tigers at Bryant-Denny Stadium on October 13, 2018 in Tuscaloosa, Alabama. Tagovailoa did not return to the game. Alabama won 39-10. (Photo by Joe Robbins/Getty Images)

With the top-tier defensive lines of Auburn and Georgia coming up, it would make sense for Tua to rest.