During his two-month involvement in the special counsel’s investigation, Jerome Corsi says that a major focus of prosecutors was whether he had a source who told him that Wikileaks planned to release emails stolen from Clinton campaign chairman John Podesta.

In an exclusive interview with The Daily Caller News Foundation, Corsi, a former reporter with Infowars, acknowledged that he told associates beginning in August 2016 that he believed, though did not know for certain, that Wikileaks possessed the pilfered Podesta documents.

Among those who Corsi claims he told of his Wikileaks theory is Roger Stone, a longtime Trump confidant who is a central figure in the special counsel’s investigation, which is being led by Robert Mueller. Stone categorically denied speaking to Corsi about Podesta emails.

Corsi announced on Monday that he expects to be indicted in the Mueller investigation for lying to prosecutors or the grand jury, which he testified before on Sept. 21 and Nov. 9.

Mueller and his stable of prosecutors are investigating possible collusion between the Trump campaign and Russian government. The probe is also focusing on whether Trump associates, including Stone, had advance knowledge that Wikileaks would release emails stolen from Democrats, including Podesta and the DNC.

Corsi denies any wrongdoing, including collusion, and claims that he is being targeted in a “perjury trap.” He says that rather than having direct knowledge of the Podesta emails from Wikileaks, he merely pieced together a trail of clues put into the public domain by Wikileaks founder Julian Assange.

“They wanted to know who my source was to Julian Assange, who gave me information where I really appeared to know in advance that he had Podesta emails,” Corsi told TheDCNF in a phone interview Tuesday. (RELATED: Jerome Corsi Says He Will Be Indicted In Mueller Probe)

“I was telling people as early as August, I thought Assange had Podesta emails, and I thought he was going to drop them in October,” Corsi said.

Roger Stone, former confidant to President Trump speaks to the media after appearing before the House Intelligence Committee during a closed door hearing, September 26, 2017 in Washington, DC. (Photo by Mark Wilson/Getty Images)

“There was plenty on the public record that allowed me to conclude that just studying from what Assange says. And I believe I was always telling the truth to the special counsel,” says Corsi, who is perhaps best known for his role in disputing former President Barack Obama’s birth certificate.

“I had told others probably in phone conversations, probably in emails, because I didn’t see any reason not to share this,” added Corsi.

“I’m sure I talked to Roger Stone about it.”

Stone, 66, insists that Corsi did not tell him anything about Podesta emails.

“Absolutely, positively not,” he told TheDCNF.

“The text messages and email train indicate the opposite,” said Stone, the men’s fashion editor for The Daily Caller.

Corsi’s comments, which reflect testimony he has given to Mueller’s grand jury, could potentially pose a problem for Stone, who is a focus of the investigation.

Stone has drawn scrutiny over his claims in an August 2016 email and a subsequent speech that he was in contact with Assange. Stone has also been scrutinized over a tweet he posted on Aug. 21, 2016 in which he asserted that “it will soon [be] the Podesta’s time in the barrel.” 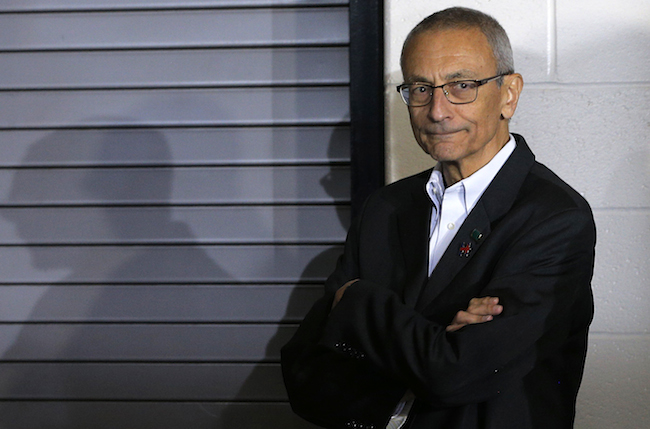 Stone’s critics have claimed that the tweet showed that Stone had advance knowledge of Wikileaks’ plans to release Podesta’s emails. But Stone, a longtime Republican political operative, has said that the tweet was a reference to his conversations with Corsi regarding research into the business activities of John Podesta and his lobbyist brother, Tony.

He has noted that his tweet read “the Podesta’s,” which suggests he was referring to multiple Podestas and not just one.

Stone has acknowledged interacting during the campaign with Corsi, who he met in 2015.

Stone says Corsi pointed him to an Aug. 14, 2016 article published at Breitbart News, which questioned some of the Podesta brothers’ business dealings. Stone claims that he asked Corsi to write a memo on the topic. Corsi provided the memo on Aug. 31, 2016.

Stone adamantly denies meeting or communicating with Assange, who is living under asylum in the Ecuadorian embassy in London. He says that he had a general idea that Wikileaks would release documents detrimental to the Clinton campaign but that he did not know the source, content or specific date.

He has said that Randy Credico, a comedian who knew Assange, had confirmed to him that Wikileaks would release information that would “roil” the campaign. Credico has denied being Stone’s connection to Assange, though he has claimed at various points over the past year that he indeed was a middleman of sorts for Stone and Assange.

Mueller’s grand jury has heard testimony from two witnesses in recent weeks who said that Credico acknowledged that he was a source for Stone. (RELATED: Mueller Grand Jury Witness Provided Testimony That Backs Up Roger Stone)

Corsi maintains that he has committed no wrongdoing and that he is not sure exactly which parts of his testimony constitute perjury.

On Monday, he announced on his YouTube channel that prosecutors informed him last week that he will be indicted for lying to investigators or the grand jury.

“I fully anticipate that in the next few days I will be indicted by Mueller for some form or another for giving false information the special counsel or the grand jury,” he said.

“I’m confident I did nothing wrong, and I had nothing to hide,” insists Corsi, who was subpoenaed on Aug. 28.

A source with knowledge of Corsi’s most recent grand jury appearance, which occurred last Friday, told TheDCNF that he was pulled out of the proceeding because prosecutors were frustrated with his testimony.

Corsi has said at various points that he has not met or corresponded with Assange. He claimed in a web cast on Aug. 30 that he purposely avoided reaching out to the Wikileaks founder out of fear that he would land on investigators’ radars. But since announcing his impeding indictment, Corsi has at times adopted legalistic lingo in discussing the Wikileaks chief.

On Tuesday, he told TheDCNF: “I’ve never met Julian Assange. I was in London twice when I could have gone to see Julian Assange, and I did not.”

“[The special counsel] knew I didn’t see Julian Assange,” added Corsi, who said he provided his passport to prosecutors along with two of his computers, his cell phone, and access to his Twitter account and phone records.

Corsi says that Mueller’s team zeroed in on a trip he took to Italy with his wife in July and August 2016 to celebrate their 25th wedding anniversary. It was on that trip that Corsi claims his theory about Wikileaks and Podesta finally clicked.

“When I flew to Italy in July and early August 2016 for my 25th wedding anniversary, I really put it together,” he says of Wikileaks having Podesta’s emails.

Corsi says that he came up with his theory after realizing that Wikileaks’ July 22, 2016 release of DNC emails did not contain any from the Clinton campaign chairman.

“I noticed there weren’t any Podesta emails in there. In July, flying over to Italy I thought, ‘I bet Assange has Podesta’s emails,'” Corsi asserts.

“They really wanted me to tell the truth, and I did. But they wouldn’t accept that.”

“They said they wanted me to tell the truth, but when I did tell the truth they told me it was preposterous, and they wouldn’t accept it. And that’s when it got incredibly difficult for me.” (RELATED: Mueller Grand Jury Witness Cryptically Suggests He’s In Legal Jeopardy)

“If Assange has the goods on Hillary, he ought just to drop the goods,” Corsi wrote on Twitter on Oct. 2, 2016. “Otherwise, he’s going to make a fool of himself.”

Corsi was referring to a highly-anticipated press conference that Assange was set to attend in Berlin. Assange failed to release any emails, as many observers had expected. Corsi responded with criticism of Assange.

“Had zero, or he would have released it. Will take grassroots on Internet to get truth out & beat Hillary.”

Corsi says that the tweets show that he did not have definitive proof that Assange planned to release Podesta documents or any other Clinton-related emails.

“What that did was it showed that I really didn’t know for sure even in October when Assange didn’t release them, I said, ‘well you’ve got nothing. You’re just blowing smoke at all of it,'” he told TheDCNF.

“Assange didn’t give me anything,” he added.