“Julian Assange has kryptonite on Hillary,” Randy Credico wrote to Stone on Aug. 27, 2016, according to text messages that Stone provided to The Daily Caller News Foundation.

“You are not going to drag my name into this are you,” Credico wrote on Sept. 29, 2016, suggesting that he was worried that Stone would identify him as his source for public claims he was making about WikiLeaks’ plans.

Credico also suggested in the texts that his source for some information about WikiLeaks was one of the group’s lawyers, who he said was one of his “best friends.” Stone has long claimed that the lawyer, Margaret Ratner Kunstler, was a source for Credico. (RELATED: Roger Stone’s Attorney Recently Testified Before Mueller Grand Jury)

Stone’s knowledge of WikiLeaks’ plans has been a central focus of special counsel Robert Mueller’s Russia investigation. Prosecutors have questioned numerous Stone associates to find out how the longtime political operative appeared to have advance knowledge that WikiLeaks would release information damaging to the Clinton campaign.

Stone, 66, reluctantly told the House Intelligence Committee in October 2017 that Credico was his back channel to WikiLeaks and Assange. But he has claimed that he did not know the source or content of the Clinton campaign emails. Credico has adamantly denied being Stone’s conduit, saying in numerous interviews over the past year that Stone was lying.

Credico also told CNN that his testimony to Mueller’s grand jury on Sept. 7 was consistent with his public denials about being Stone’s source.

Pointing to the text messages, Stone asserts that Credico “lied to the grand jury” if he indeed denied being Stone’s contact to Assange.

“These messages prove that Credico was the source who told me about the significance of the material that Assange announced he had on Hillary. It proves that Randy’s source was a woman lawyer,” Stone told TheDCNF.

Stone, who is the men’s fashion editor for The Daily Caller, had struggled for months to provide evidence to back up his claims about Credico. The former friends had engaged in a he said-he said battle through various media outlets for months.

But Stone finally obtained the text messages, which he says is smoking gun evidence supporting his claims, after his lawyers were able to extract the communications from a cell phone he stopped using in 2016.

It is unclear whether Mueller’s team has also obtained the messages.

“Julian Assange has kryptonite on Hillary,” Credico wrote to Stone on Aug. 27, 2016.

Credico asked Stone not to identify him as the connection to Assange on Sept. 18, 2016.

“Just remember do not name me as your connection to Assange you had one before that you referred to,” he said.

Credico continued to express concerns that Stone would identify him as his link to Assange.

“Leave my name out Im [sic] going to be all screwed up today,” wrote Credico. 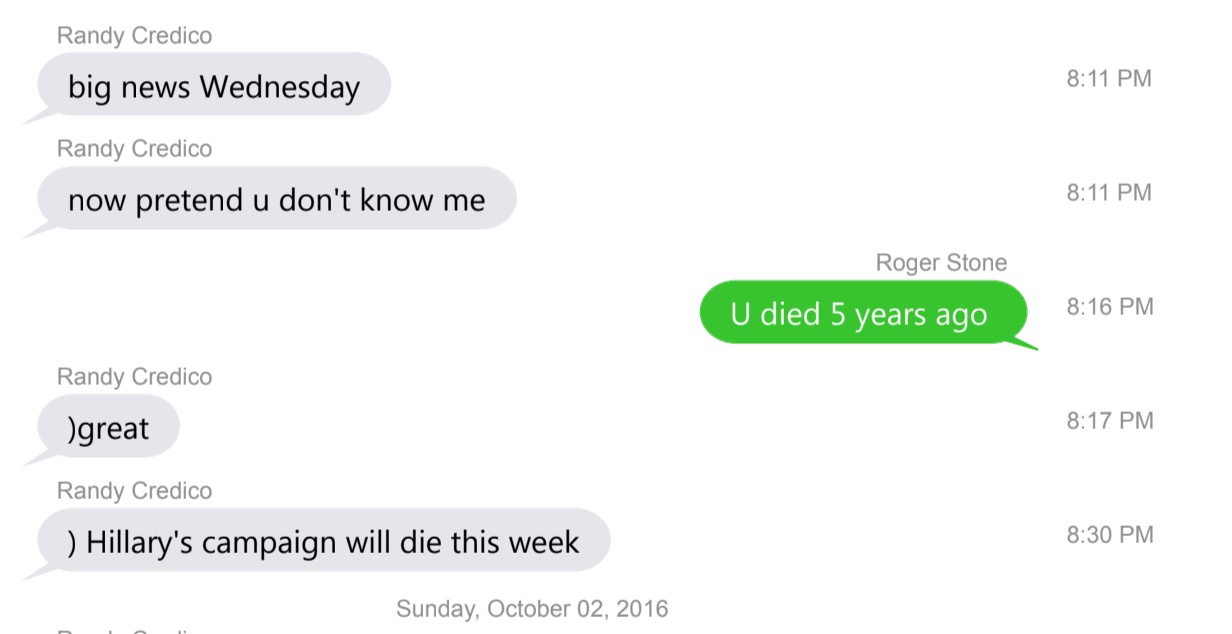 Credico followed up two days later, telling Stone: “I think its [sic] on for tomorrow.”

Later that day, Assange held a highly anticipated press conference in which he announced that he would be releasing documents on a weekly basis through the election.

“Off the Record Hillary and her people are doing a full-court press they keep Assange from making the next dump,” wrote Credico, adding, “That’s all I can tell you on this line.”

He then asked Stone to “please leave my name out of it.” 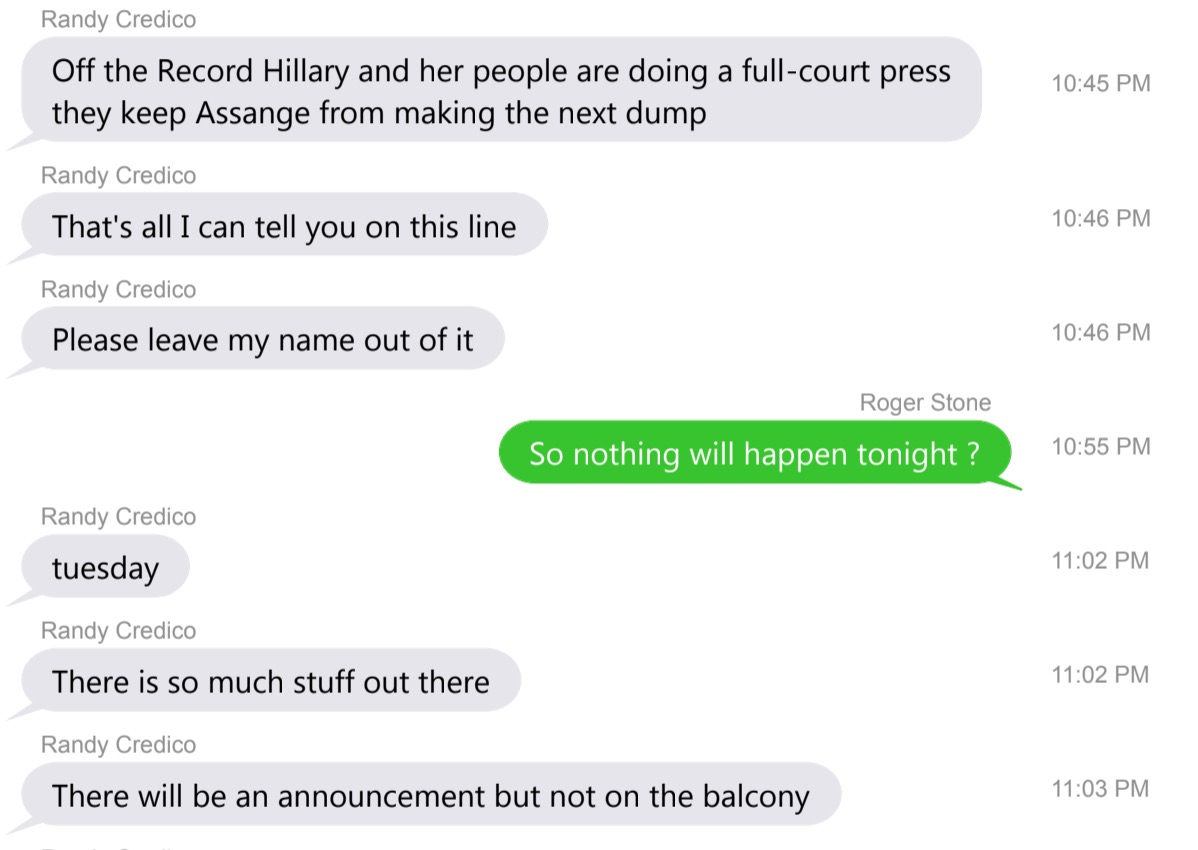 Credico also told Stone that he was aware of Assange’s contacts “Because I’m best friends with [Assange’s] lawyer and leave it at that and leave it alone.”

Mueller’s grand jury has recently heard testimony from two other witnesses who said Credico acknowledged being a source for Stone.

David Lugo, a filmmaker who has worked with Credico and Stone, testified on Oct. 19 that Credico told him on May 12, 2017 that he was Stone’s point of contact. Lugo told TheDCNF that he also testified that Credico threatened earlier this year, well before his testimony, to “put a bullet in my head” for speaking out in defense of Stone.

Tyler Nixon, a lawyer who has worked for Stone, testified on Nov. 2 that he was at a dinner party in mid-November 2017 when Credico acknowledged he was Stone’s source. Days after the dinner party, on Nov. 30, 2017, the news broke that Stone had identified Credico to the House Intelligence Committee.