Many handgun hunters first took notice of Taurus in the late 1990s, when the Brazilian manufacturer introduced its massive Raging Bull revolver chambered for the beast-stomping .454 Casull. Later, hunters who wanted to carry a handgun on the trail but not necessarily hunt with it recognized the Taurus Tracker. Chambered for perennial favorites such as .357 Mag. and .45 Colt, the Tracker offered peace of mind that rode well on the hip. And when the Taurus Judge launched in 2006, packing five .410-bore shotshells, just about everyone agreed it was the thing to carry for keeping venomous snakes out of the blind. 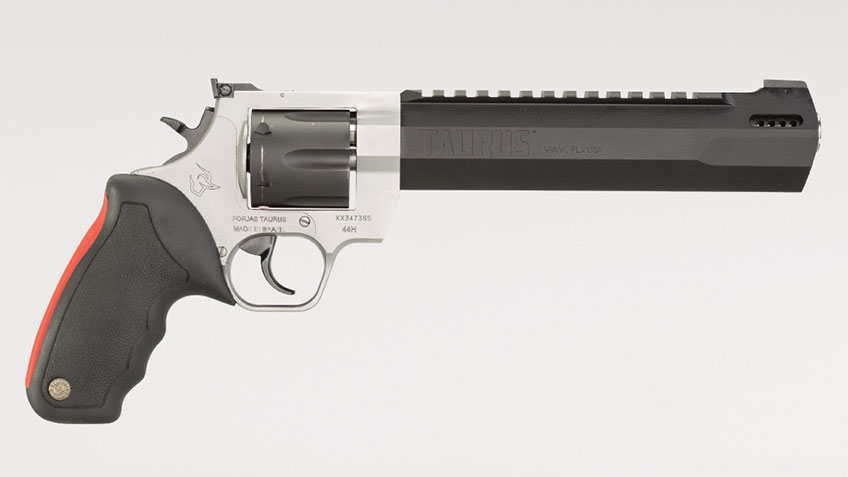 Point is, for a company that’s perhaps better known for its self-defense and concealed-carry handguns, Taurus has produced a bunch of revolvers made for hunters. (In fact, my introduction to Taurus came by way of several bear-hunting friends who, while we shared a house at Penn State in the mid-’90s, spent long nights discussing the merits of purchasing one of the company’s large-frame .44 Rem. Mag. revolvers for “the drives.”) Now the company makes its dedication to the hunting market more obvious than ever with the release of its Raging Hunter revolver.

You don’t have to be an angry woodsman to carry the Raging Hunter. The first half of the name ties the .44 Mag. revolver to its Raging Bull roots, as the Bull and the Hunter have several similar features. Aesthetically, the most recognizable similarity is the red, cushioned insert that runs along the back of the grip to pad the hand against recoil. Mechanically, the shared feature that stands out most is the secondary cylinder lockup point, easily identified by the checkered latch on the crane. In addition, both revolvers have an 8⅜-inch ported barrel covered by a full-length shroud.

The differences between the Raging Bull and the Raging Hunter are certainly aimed at making the latter more practical in the field. For one, the Hunter at 55 ounces weighs a half-pound less than its predecessor. Taurus cut most of this weight by using a two-piece barrel and shroud assembly, and by making the shroud out of aluminum. The shroud mates to the stainless steel barrel, which secures to the frame. 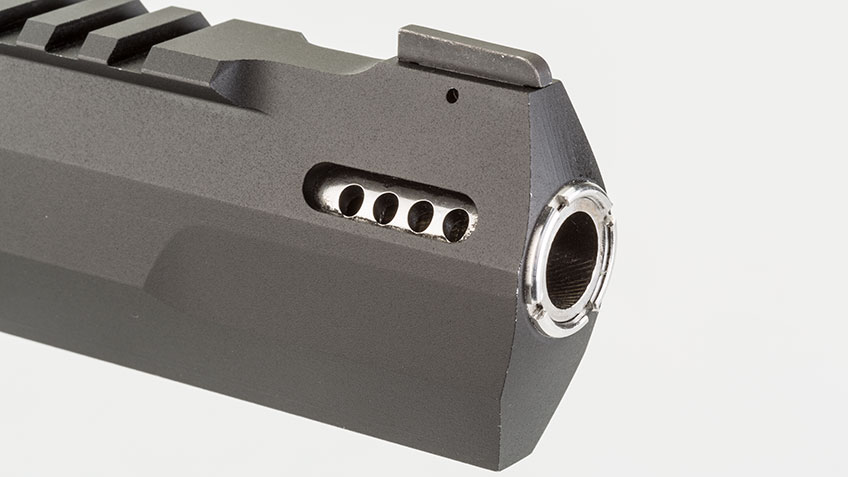 While less weight is a good thing when carrying a gun on your hip or chest all day during a hunt, it usually comes at the expense of more recoil. With the Raging Hunter, though, the trade-off is a fair one. The eight gas ports at the muzzle combined with the cushioned grip are effective at keeping the recoil produced by heavy .44 Mag. hunting loads controllable. A portion of the propellant gas escapes through the ports and forces the muzzle downward, which reduces the so-called “flip,” or rise, of the muzzle as the bullet exits. Don’t get me wrong: The muzzle still jumps when a 240-grain hardcast bullet leaves the barrel at 1500 fps, but the rise isn’t as dramatic and snappy as with a non-ported barrel. Bear in mind the ports contribute to a sharper report; much like when firing a rifle with a muzzle brake, slipping on hearing protection before you take a shot at game is wise.

A Picatinny rail machined into the Raging Hunter’s barrel shroud makes it easy to add an optic. Most red-dot and reflex optics come with Picatinny-compatible mounting bases, and all you need for a scope are rings. The rail’s 13 slots provide lots of leeway for positioning the optic where you want it. The gun also comes with iron sights: a fully adjustable rear blade with a square notch and a plain black Patridge-style front.

Finish may be a small thing in overall gun design, but Taurus designers thought like hunters when they put the final touches on this revolver. Thanks to matte-black components, the Raging Hunter is more subdued than the Raging Bull with its somewhat shiny, all-stainless finish. The Raging Hunter is available in a two-tone version with a stainless steel frame and matte-black cylinder and barrel shroud, as well as an all-matte-black version. 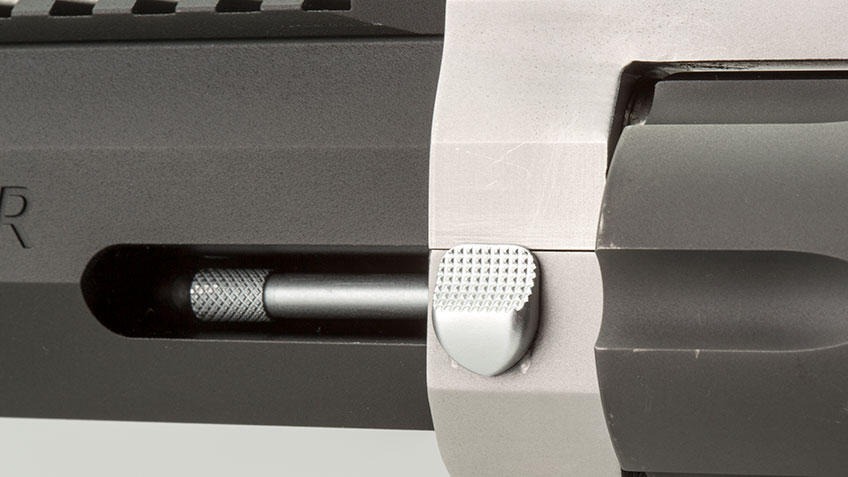 Like all current Taurus revolvers, the Raging Hunter has a transfer-bar mechanism that prevents the hammer from contacting the frame-mounted firing pin unless the trigger is pulled fully to the rear and held there. This prevents the gun from firing should the hammer become accidentally snagged and dropped. It also adds a measure of safety when lowering the hammer on a loaded chamber, such as when a deer hears the click of the hammer as you thumb it back and bolts before you can get a shot. Remove your finger from the trigger after releasing the hammer, and the transfer bar lowers into the frame to prevent contact with the firing pin.

Although hunters can pick more powerful revolver cartridges, the .44 Rem. Mag. remains one of the most versatile handgun rounds. With medium to heavy loads it packs plenty of punch for deer, hogs and even larger game. In the Raging Hunter, it handily filled coolers with wild pork during a few days spent in the Florida swamps with Osceola Outfitters. Those shots were taken at ranges of 20 yards or less, but the Raging Hunter is accurate enough for downing game at several times that distance.

During 50-yard accuracy testing with a Burris FastFire 3 reflex sight aboard, the revolver produced an overall five-shot group average of 2.85 inches with three different 240-grain loads. A trigger with a crisp, single-action pull weight of 4.5 pounds aided my efforts, and the comfort factors built into the revolver’s design helped me focus on the shot instead of the recoil.

Despite the gun’s name, I’m anything but angry about the performance of the Raging Hunter. Most handgun hunters should be happy to carry this latest offering from Taurus into the field. 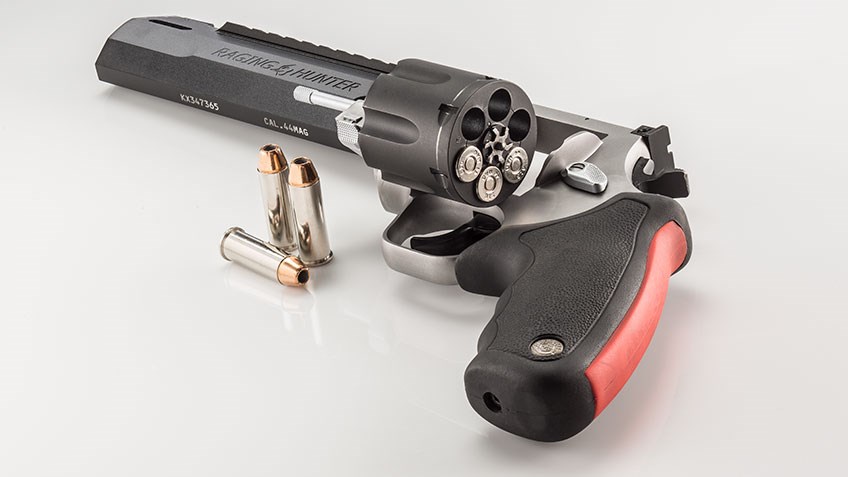