The U.S. Supreme Court weighed a lawsuit Monday alleging Apple Inc. has monopolized the market for iPhone apps, with hundreds of millions of dollars in the balance.

The high court is not deciding the merits of the antitrust case — rather, it will decide if the lawsuit can go forward at all. Though a federal trial judge in California dismissed the case, the 9th U.S. Circuit Court of Appeals said it could go forward, prompting an appeal to the Supreme Court.

The app market is essentially a closed system for consumers. Apple iPhones are programmed so they cannot download apps outside the Apple-administered App Store, and users who modify their devices to download apps from other sources — called jailbreaking — risk adverse consequences like voiding their warranty. What’s more, Apple may remove apps from its store for any reason whatever, and requires that all prices are set on a .99 scale, like $1.99 and $2.99.

When an application is purchased, Apple collects a 30 percent commission and gives the other 70 percent to the developer.

Taken together, the plaintiffs say this constitutes an unlawful monopoly: consumers are forced to purchase apps in a digital storefront Apple controls, and end up paying higher prices because developers price in the 30 percent commission Apple collects, effectively passing the burden on to consumers.

That 30 percent commission was at issue in Monday’s case. Under a 1977 Supreme Court precedent called Illinois Brick Co., no cause of action exists for consumers to whom costs were passed on as the result of an alleged monopoly. Only direct purchasers — the consumers overcharged in the first instance — may sue.

Apple says the app developers, not the iPhone users, are the direct purchasers here, so the case should be dismissed. (RELATED: Brett Kavanaugh Is Keeping A Low Profile In His First Months As A Justice)

Furthermore, Apple says they are not actually selling products in the App Store. Rather, Apple is acting as an agent facilitating transactions between users and developers.

“We are hopeful the Supreme Court will recognize Apple’s critical role as a marketplace for apps, and uphold existing legal precedent by finding in favor of Apple and the millions of developers who sell their apps on our platform,” Apple said in a statement. 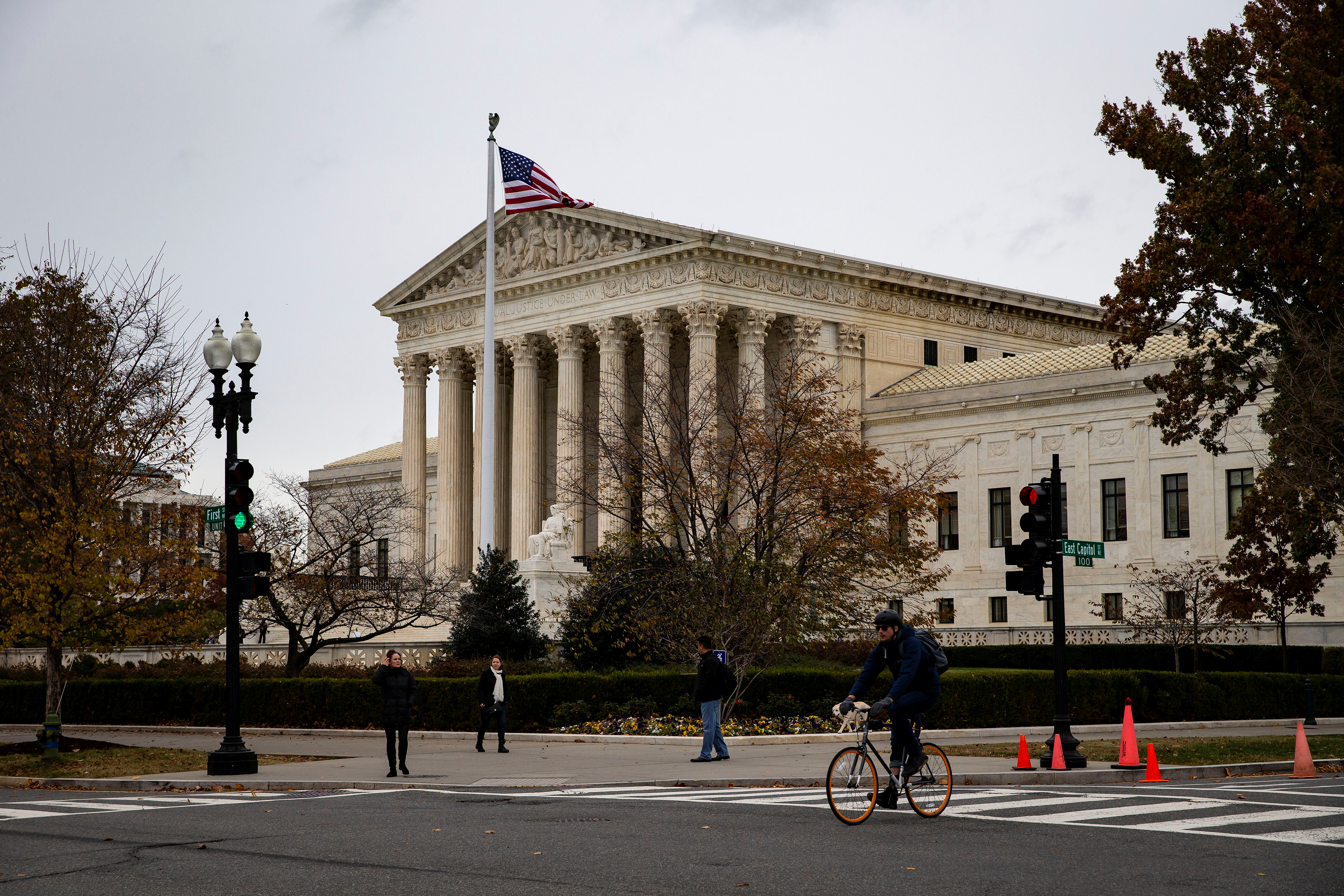 A man rides a bicycle past the Supreme Court in Washington, U.S., November 13, 2018. REUTERS/Al Drago

The plaintiffs warn that a ruling for Apple could prevent any challenge to the company’s supposedly anti-competitive behavior — if consumers cannot challenge the app purchasing scheme in court, the only other possible plaintiffs are the developers themselves, who have no reason to challenge the company that offers them access to a massive market and assistance with compliance and transactional costs.

That outcome, the purchasers continue, undermines the Clayton Act, a federal law that meant to encourage anti-trust regulation through private lawsuits.

Unrepresented during Monday’s arguments were the app developers themselves. One industry group called ACT | The App Association, which represents 5,000 developers and connected device companies, filed an amicus brief endorsing Apple’s position. Among other things, the association argued a ruling for the plaintiffs would actually hurt developers, since major platforms like Apple could give them less favorable distribution terms to avoid lawsuits.

“Despite the importance of our role, we find ourselves talked about rather than with and today’s oral arguments were no exception,” Association president Morgan Reed said after Monday’s argument. “We cannot let the plaintiff’s bar turn developers into suppliers or employees of platforms as they look for in roads around developers to reach platforms.”

The Trump administration and the U.S. Chamber of Commerce filed amicus (or “friend-of-the-court”) briefs supporting Apple. A bipartisan coalition of states filed a brief arguing the Illinois Brick Co. rule is not longer suited to current economic conditions.

Other e-commerce giants like Amazon operate markets like the App Store, prompting anxiety in the tech sector that a ruling for the purchasers will expose the entire industry to costly antitrust lawsuits.

The high court handed down a landmark internet commerce case in June, clearing the way for states to collect sales taxes on internet transactions.