IN A PILE OF SOFT BLANKETS IN WASHINGTON— CNN host Brian Stelter hasn’t placed himself in front of a TV camera enough lately. So now we have his weekly show, “Reliable Sources” — we watch so you don’t have to. Enjoy.

The lefty host starts with the Trump-Manafort story. Not because this is his beat — that would be media. But any chance he gets to kick the president in the head or declare that the president is losing his mind, he takes it.

“What we know is that Trump remains under investigation,” Stelter says, calling Trump world “the land of make believe.”

He brings up a Trump tweet from the weekend — one in which Trump says Special Prosecutor Robert Mueller’s latest findings clear him.

“Trump’s deception are a sign of disrespect,” Stelter tells his viewers. “He’s talking down to you.”

Bernstein, complete with tortoise-shell frames is standing in front of modern lighting instead of bookshelves, says impeachment hearings for Trump are certainly possible.

“He is boxed in by Mueller and the people around him know that he is,” he says. “…Mueller is now connecting the dots…”

Brian says scandal is making the public and the press exhausted. He wants to know when this will all be over.

Bernstein has no idea. But he blathers on anyway, never answering the pointless question.  Eventually he says it looks like the “House of Cards” could drop. He says Republicans are “shaken in private.” He says they say Trump has been behaving “unhinged” — much more so than usual.

Bernstein says “we could be in for a very very rough ride these next few months.” Ahhh….an answer to  Brian’s question?

Brian wants to know, “Is the Trump presidency a criminal presidency?”

“We don’t know completely yet,” Bernstein says, adding that it’s obvious that Trump has led a conspiracy to obstruct justice.

Bernstein refuses to be succinct. BREATHE. (I’m talking to myself as much as to him.)

Oh fuck. The first expert panel is here. Here comes David Zurawik, the media “critic” from The Baltimore Sun. I haven’t seen him in awhile and it has been such a pleasure. Excuse me while I turn down the volume on my TV.

The LOUD ONE is joined by The New Yorker’s Susan Glasser and The Atlantic’s David Frum.

Glasser’s minimalist makeup and clothing are a relief. She keeps things simple and elegant and her thoughts, concise. “Stick to the facts,” she says. “Read these extraordinary court filings. …You have 47 pages in the Southern District of New York. …We have learned some striking facts and information that we didn’t know a month or two ago.”

“That’s the thing that really struck me about the coverage this weekend…it’s the end. It’s the beginning of the end. …I would just urge caution.”

Zurawik says his mind, such as it is, was “blown at midnight” on election night when Trump won. At 6 p.m. he was sure Trump would  lose. It’s time to kiss Bernstein’s ass. “I thought he was just perfect,” he says of Bernstein’s blathering.

“EVEN SOME PEOPLE DON’T REALIZE IN OUR SOULS THIS IS HUGE,” he shouts.

It’s Frum’s turn: “Donald Trump has the power to end organized life on this planet in 7 minutes.”

Frum, who seems perpetually irritated, brings up Trump clearing himself.

Frum says there is an “imperative to be responsible. … Nixon lied but he did not completely ignore reality.”

Glasser says what we have now are “bread crumbs” but the conclusion will come out. She says we don’t have a final decision on collusion and the media shouldn’t act like it does.

Coming up: The fate of The Weekly Standard, a conservative mag that may shut down in the coming weeks. “So far the company is not commenting,” Stelter says.

Max Boot, who hates Trump and used to write for The Weekly Standard, is here to provide clarity and scant new information: “My friends over there are optimistic,” he explains, saying the mag may survive but under a slightly different name.

The subject quickly turns to how many Fox News employees have moved over to the White House and Trump’s administration. Boot and Stelter agree that this is bad for America and Trump.

Balding count on today’s show so far: Three balding men, a woman with a full head of hair and a male with a receding hairline.

“IF YOU WATCHED FOX WITHOUT SOUND LIKE I DID, YOU KEPT SEEING A HEADLINE POP UP THAT SAID ‘NO COLLUSION.’ AND THE OTHER WAS ‘WITCH HUNT EXPOSED.’ IT JUST KEPT REPEATING ITSELF. FOR THOSE WHO DON’T WANT EXPERTS, HERE’S WHERE YOU GO. …THAT’S WHAT YOU FEED THE BASE, THAT’S REALLY DANGEROUS.”

No, what’s really dangerous is listening to Zurawik without earplugs. 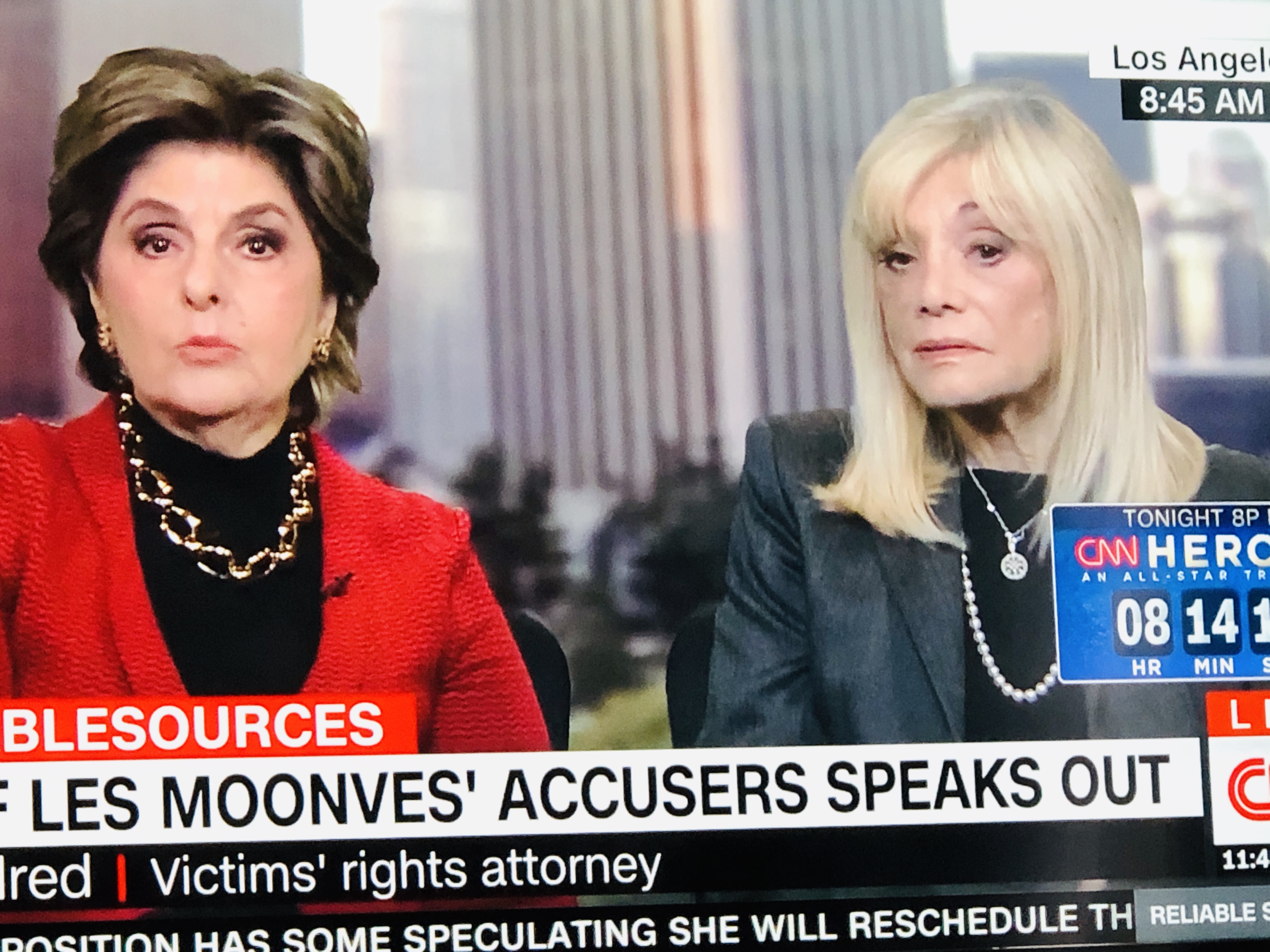 Famed victims rights attorney Gloria Allred is being blasted into the show from LA with an accuser of CBS’s ex-CEO Les Moonves. The former CBS honcho is in a lot of hot water after being confronted with sexual harassment allegations from six different women. Moonves resigned in September when the news surfaced. Now the company is deciding whether to give him $120 million in payout.

She recalled not getting the same amount of money as the men who were VPs. “There was no one you could go to, which is why it took me so long to go to the police,” she says.

“He did ruin my career,” Gottlieb says, adding that she wants Moonves to be “miserable.” She said when she wouldn’t go along with his “games” her office was moved to the “cellar.”

Stelter doesn’t even think to question her story. He replies, “Basically your career was squeezed away.”

Gottlieb says Moonves threw her up against a wall, and claimed his secretary willfully didn’t see it.

Again, no real reaction from Stelter.

The host sews up the segment by saying Moonves denies the allegations despite “many other women” who say otherwise.