Jerome Corsi, the right-wing author ensnared in the special counsel’s probe, raised tens of thousands of dollars on his website and web show over the summer for an Alaskan man who claimed he needed experimental cancer surgery from an Israeli physician.

Sickler needed $25,000 for the surgery since his insurance wouldn’t cover the experimental procedure.

“I met Tommy Sickler. He said he suffered from cancer. I believe he had an operation in Israel,” Corsi told TheDCNF in a phone interview Thursday.

But there are two main problems with the fundraiser. TheDCNF couldn’t find any records proving Dr. Eliat Mendelsohn exists. And Sickler, the purported patient, is the registered owner of Mendelsohn Consulting Group, the same clinic Corsi links to on his website boosting Dr. Mendelsohn.

Florida business records show Sickler registered as owner of the Mendelsohn Consulting Group LLC on Aug. 15. He registered a business under the same name in Nevada on July 31. 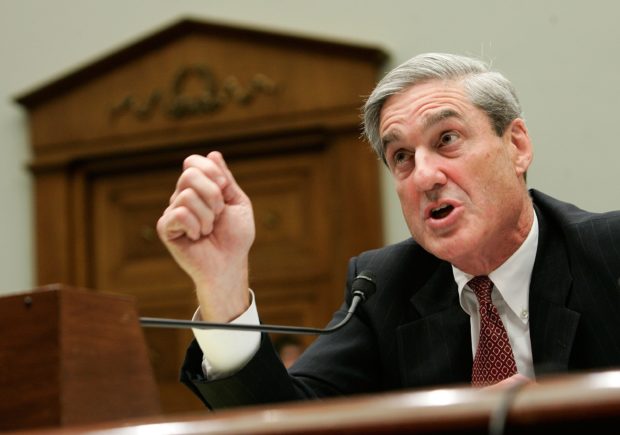 An open source search did not find any recent affiliations between a Dr. Mendelsohn and Sourasky. Florida’s physician licensing database also does not list an Eliat Mendelsohn, even though Corsi claimed the doctor set up a practice in Boca Raton.

Confronted by TheDCNF, Corsi insisted the Sickler effort was “legitimate” and he received “not a penny” of the money he raised for Sickler’s GoFundMe campaign.

When told Mendelsohn appears not to exist, Corsi replied: “[Sickler] was healed. At least that’s what I certainly was led to believe, and I think it’s true. I think he was a cancer survivor.”

“If I was misled, or I was bamboozled on that, I honestly think Tommy Sickler was a cancer survivor,” he continued.

When reminded of his claim that his family member was successfully treated by Mendelsohn, Corsi said: “That’s all I’m going to say. It’s a personal matter.”

Mueller is interested in Corsi’s links to Trump confidant Roger Stone and WikiLeaks. Corsi claimed Mueller wants him to testify that he was a link between Stone and WikiLeaks, which on Oct. 7, 2016, published emails stolen from Clinton campaign chairman John Podesta. (RELATED: EXCLUSIVE: Jerome Corsi Reveals Why He Is In Mueller’s Crosshairs)

Corsi denied being the link. Stone claims he received tips from a left-wing activist named Randy Credico who is close friends with an attorney for WikiLeaks.

Text messages released by Stone show Credico told him WikiLeaks would release information damaging to the Clinton campaign. Stone says he did not know the source or content of the releases. Nor did Stone discuss a pending release with now-President Donald Trump, he claims.

It is not clear if Mueller is investigating the Mendelsohn matter, though the special counsel has shown a penchant for investigating areas that are not directly linked to Russia or election interference. Mueller has secured a conviction, for instance, against Paul Manafort for the former Trump campaign chairman’s consulting work for Ukraine.

When asked if he is aware of any interest by Mueller in the fundraiser, Corsi said: “They can look at that all they want. I’m not going to talk about it. It’s too private.”

“If they want to accuse me of running a fraud to raise $25,000 for Tommy Sickler, they can go ahead and accuse me of that if they want to,” he continued.
Corsi plugged the Sickler fundraiser and Mendelsohn on a nearly daily basis on his YouTube show up until he took a hiatus in late August, when he was subpoenaed by Mueller. Weeks into the fundraising campaign, Corsi began saying he had “first-hand experience” with Mendelsohn’s breakthrough medical techniques.

“While Dr. Mendelsohn cannot promise his treatments can cure cancer, I can attest from first-hand experience with a member of my family that Dr. Mendelsohn has achieved remarkable results with a Stage 4 lung cancer that had survived both chemotherapy and radiation treatments,” Corsi wrote on his website.

In an Aug. 2 episode of his YouTube show, Corsi said Mendelsohn had cured his wife’s cousin’s cancer.

“She was treated in Israel by Dr. Mendelsohn, and I think she looks better than she has in maybe two years,” said Corsi, adding that “we’re eternally grateful for Dr. Mendelson for doing what we consider a medical miracle.”

But the miracle cure created a new fundraising opportunity.

“I’m actually thinking of helping [Sickler] to raise some more money because I know this period of time of convalescence, you’re not able to work. So we’re going to have a conversation with Dr. Mendelsohn and see if we need to raise you some additional funds,” Corsi said in an Aug. 13 video on his YouTube channel.

There is other evidence that strongly suggests the Mendelsohn operation is not what Corsi or Sickler claim it to be. In addition to business records linking the Mendelsohn Consulting Group to Sickler, the phone number listed on the company’s website redirects to Sickler’s phone.

Phone calls placed to the number were not answered, and Sickler did not respond to requests for interviews submitted through Facebook, Twitter and email.

Corsi also linked to an account for Mendelsohn — @DrMendelsohn — that doesn’t appear to be operated by an Israeli physician. Sickler tweeted a thank-you to Corsi on June 27 after he plugged Sickler’s GoFundMe account. The Mendelsohn account has tweeted at Corsi and Sickler. 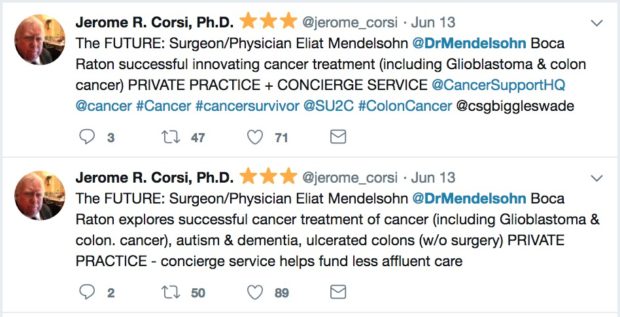 Though Corsi has indicated that Mendelsohn is elderly — he claimed on one show that Mendelsohn has practiced medicine for 50 years — the avatar for the @DrMendelsohn account is a portion of a photo of a doctor who appears much younger. 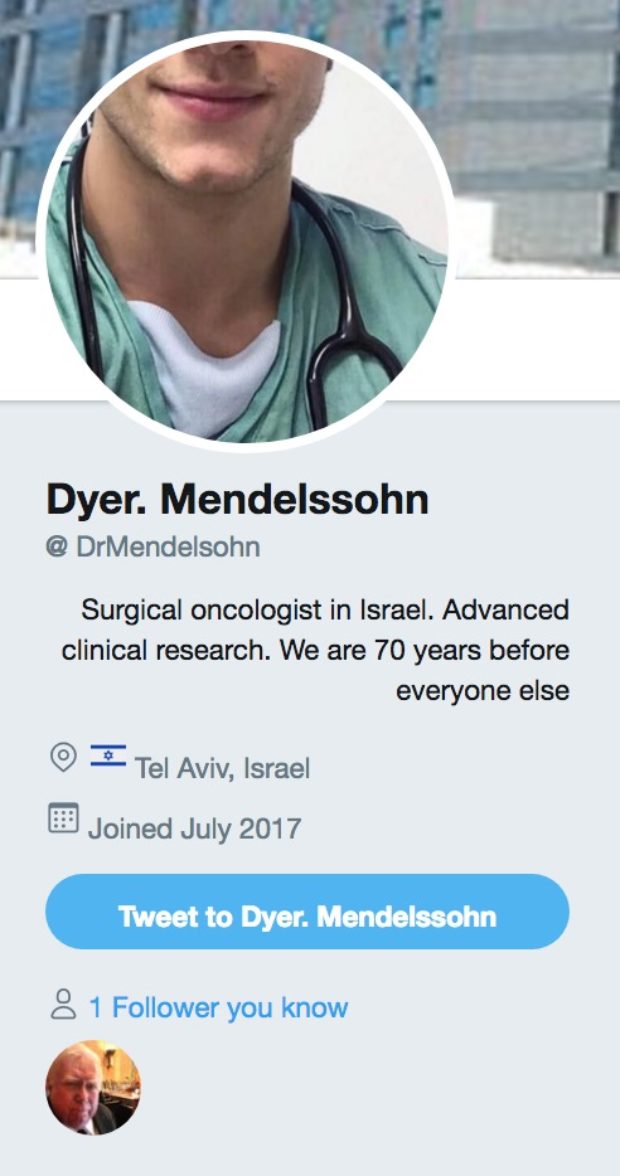 The @DrMendelsohn avatar appears actually to be a clip of a photo of Gabriel Prado, a Brazilian neurologist who has a heavy social media following. 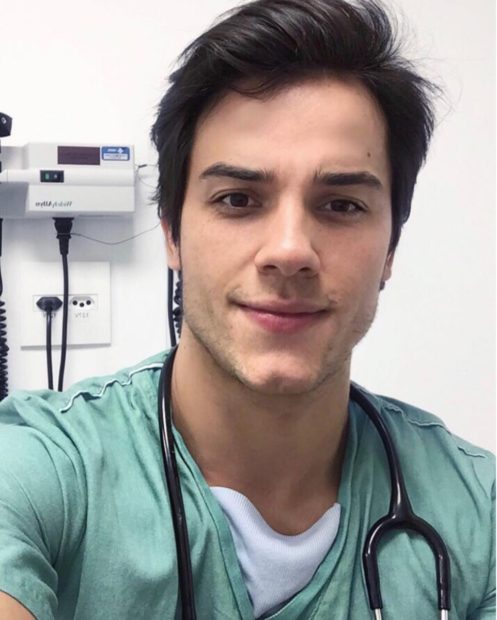 The @DrMendelsohn account feed also suggests it is not operated by an Israeli oncologist. The account has numerous posts touting Q-Anon, a far-right conspiracy theory that claims Trump is a victim of the so-called deep state.

Corsi, who follows the account, has touted Q-Anon’s theories at InfoWars and online. He has more recently disavowed the movement.

Corsi’s webcasts throughout July and August include repeated mentions of both Mendelsohn and Sickler. Corsi updated viewers on Sickler’s progress while praising Mendelsohn’s cutting-edge work. Corsi would later add Sickler as a moderator on his channel’s comment feed, where Mendelsohn was a prominent participant.

“But Dr. Mendelsohn has performed a miracle. As I understand it, Tommy Sickler’s cancer is gone, which is remarkable,” Corsi said during one webcast.

Corsi took a self-imposed hiatus from his show on Aug. 31, days after he was subpoenaed by the Mueller team. He would meet with Mueller’s team for the first time Sept. 6.

He appeared before Mueller’s grand jury twice, on Sept. 21 and Nov. 9. Mueller’s team drafted a plea agreement Nov. 14 that would have required Corsi to admit to making false statements about emails he sent referring to WikiLeaks.

Corsi rejected the plea offer, saying he did not knowingly lie to prosecutors.

Corsi mentioned Sickler and Mendelsohn once more on his show during a return appearance Nov. 5. But he was less effusive of Mendelsohn than he had been in the past and avoided answering a viewer’s request for an update on Sickler. He said he could provide updates on Sickler “when I get a clearance from Dr. Mendelsohn.”

“Dr. Mendelsohn’s been spending a lot of time in Israel, where his practice is centered,” claimed Corsi.

Not much is known about Sickler, who has lived in Alaska and Florida. He is affiliated with Just Circuit LLC, another Florida-based company that helped arrange parties for the gay community. A 2009 lawsuit in Florida identified Sickler as a go-between for a businessman accused of fraud in that case.

Corsi did bring his two worlds — Mendelsohn and the WikiLeaks matter — together in one of his YouTube episodes.

In an Aug. 10 webcast, Corsi said he believed Mendelsohn would be a prime candidate to treat WikiLeaks founder Julian Assange, who is reportedly in poor health in the Ecuadorian embassy in London.

“Dr. Mendelsohn would be the perfect one to get Assange some medical treatment. I’d love to be the one to arrange that,” said Corsi.